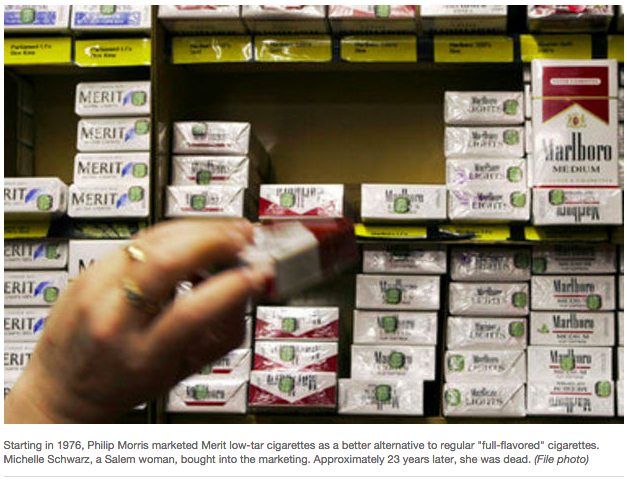 Tobacco giant Philip Morris USA has vast wealth and a Portland jury that awarded $25 million in punitive damages to a dead smoker’s family acted reasonably to send a message to the cigarette maker for its reprehensible way of conducting business, the Oregon Court of Appeals ruled Wednesday.

The appeals court likened Philip Morris’ role in the death of Salem smoker Michelle Schwarz — had it been litigated in the criminal world — to “manslaughter” under Oregon law.

Philip Morris is expected to appeal Wednesday’s ruling, which sided with the estate of Schwarz. The Salem resident started smoking in 1964 at age 18. Schwarz was concerned about the health effects, so she switched to a low-tar cigarette that the company launched in 1976. She died at age 53 — in 1999 — from a brain tumor caused by lung cancer that had metastasized.

“(Philip Morris’) conduct was a continuation of its decades-long scheme to defraud (Schwarz) and others and keep them smoking cigarettes, although it knew of the health consequences,” the appeals court wrote. “In order to give smokers a psychological crutch, it misrepresented the nature of its low-tar cigarettes, conveying the message that they were safer and healthier than regular cigarettes when, in fact, they were not.”

Schwarz’s family filed suit in 2000. In 2002, a Multnomah County Circuit Court jury awarded about $168,000 in compensatory damages and $150 million in punitive damages. But a judge later reduced that punitive damages amount to $100 million, and the Oregon Court of Appeals later struck it down and the Oregon Supreme Court refused to reinstate it.

That led in 2012 to a new trial, when a second Multnomah County jury decided on $25 million in punitive damages. That’s the amount the appeals court upheld Wednesday.

In doing so, the appeals court focused on Philip Morris’ “extreme reprehensibility.”

The appeals court also noted that the jury’s award in Schwarz’s case was smaller than another wrongful death verdict against Philip Morris: $79.5 million in punitive damages awarded to the family of Portland school custodian Jesse D. Williams. He smoked as many as three packs of Marlboros a day and died of lung cancer in 1997 at age 67.

Chuck Tauman, one of the trial attorneys in the Schwarz case, told The Oregonian/OregonLive on Wednesday that he expects the case could continue for another one to five years if Philip Morris continues its practice of appealing every ruling against it.

Philip Morris hasn’t paid Schwarz’s two surviving sons, who are her beneficiaries, any of the $25 million in punitive damages, let alone the $168,000 compensatory damages award that still stands and is not under appeal, Tauman said. But 9 percent interest has been accruing.