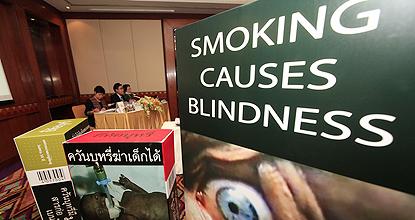 The law requiring a mandatory health warning graphic that takes up 85% of a cigarette packet, the largest anywhere, with the use of 10 different warning graphics stipulated, has now come into force in…

As a result, cigarettes sold in packets in Thailand must now have a graphic warning covering 85% of the package, and a carton must have 10 different graphics in the Thai language. The cigarette packet must also have information about the quit smoking hotline – tel 1600.

Public Health officials will start random checks from Sept 23 on retailers to ascertain whether their cigarettes on sale comply with the new requirement. The grace period is to allow distributors and retailers to clear old stock.

The ministry is campaigning to reduce the number of new smokers and existing tobacco smokers, particularly in rural areas, and reduce second-hand smoke in workplaces, public spaces and at home.

The ministry has 27 lines on its 1600 quit smoking line, which it  says has already received more than 100,000 calls. It also has over 200 quit smoking clinics at public hospitals.

Dr Narong said the warning colour graphic, the largest in the world on packets, is suitable to the tobacco smoking situation in Thailand, where more than half of smokers’ education never progressed beyond Prathom 4. The enlarged graphicwould encouraged smokers to quit the habit, or not take it up at all.

A global survey of adult smokers conducted in 2011 showed there were 13 million Thai smokers, up half a million from the survey in 2009, and that about 47% of Thai men smoke tobacco.

The survey also found that new smokers were generally aged 15-24 years. The average age of new smokers was 16.2 years, lower than 16.8 years according a survey in 2007.

Tobacco related diseases are the second most common cause of death, after alcohol, among Thai people.

A study in 2009 indicated that 50,710 people died each year on average from smoking-related diseases in Thailand. The average life expectancy of a smoker was 12 years less than a non-smoker.

The study also showed that treatment for people for illnesses stemming from smoking tobacco cost about 52.2 billion baht a year.