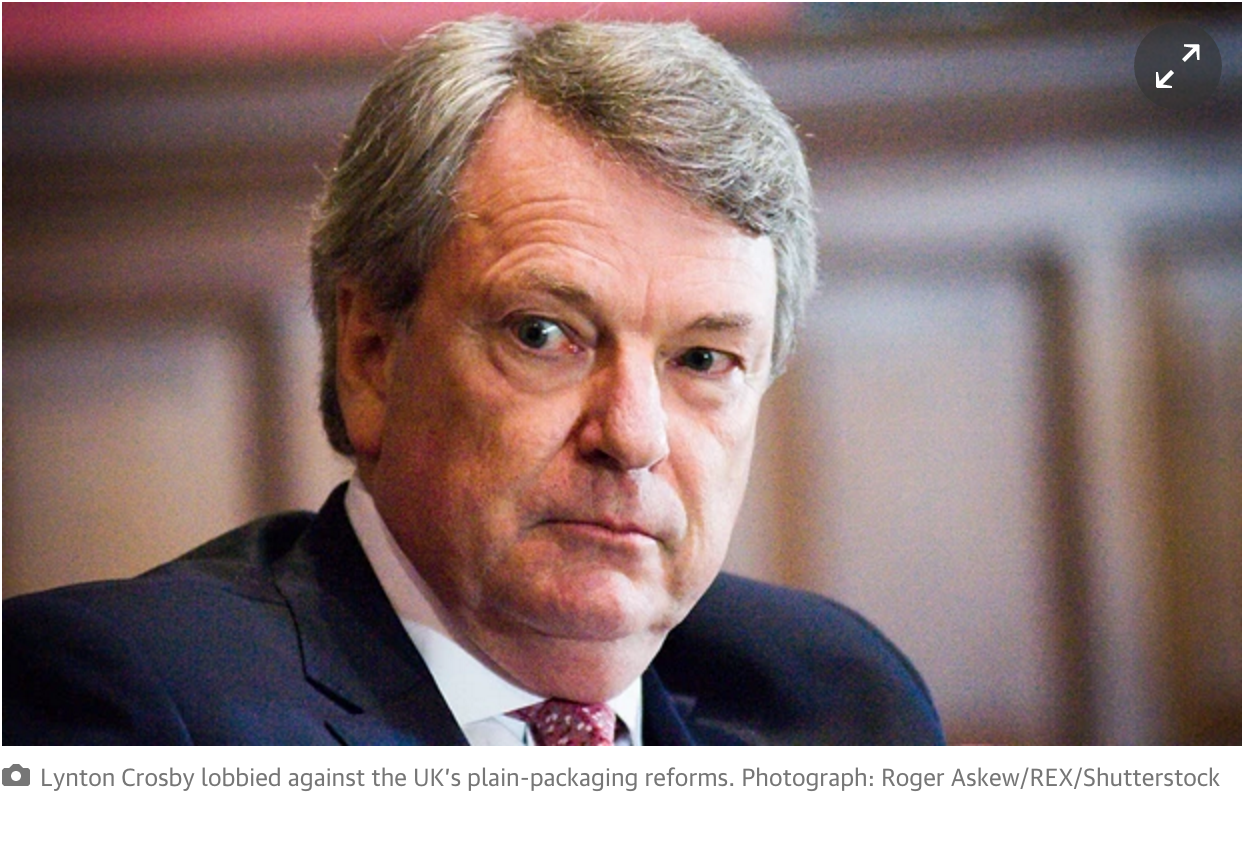 The chief executive of the Public Health Association of Australia, Michael Moore, says he is “shocked and appalled” that London-based Australian political strategist, Lynton Crosby, has been named the UK Australian of the Year despite his history of involvement with the tobacco industry.

Crosby, who was also recently honoured with a knighthood by the Conservative British prime minister, David Cameron, received the awardfrom the Australia Day Foundation UK on Friday night. He was awarded for his role in running the Conservative party’s election campaign, which saw the party re-elected in March.

But the move has left public health experts reeling.

“Not only was I shocked and appalled, but I was just flabbergasted when I heard the news that Crosby received this honour,” Moore told Guardian Australia.

“First, it demeans every Australian of the Year, and it also demeans the extraordinary number of people who have worked so hard for so long to improve the health of Australians by reducing the level of smoking in society.”

After the Tories announced Crosby as their election strategist a couple of months later, he was forced to deny trying to influence them on the plain-packaging reform agenda, saying in 2013: “Any claim that I have sought to improperly use my position as part-time campaign adviser to the Conservative party is simply false.”

However, Intellectual Property Office documents revealed Crosby did in fact lobby Marland against the plain-packaging reforms.

Crosby was also the campaign manager to the former Australian Liberal prime minister, John Howard, and it was revealed by Fairfax Media that he sought out tobacco industry funding for his political campaigns.

Australia’s high commissioner to the United Kingdom, Alexander Downer, presented the award to Crosby on behalf of the Australia Day Foundation, which promotes Australia in Britain.

“Alexander Downer, having been elected and having been such a senior member of the Liberal party, must know, must understand that Crosby has ties to tobacco,” said Moore, who is also president elect of the World Federation of Public Health Associations.

“An Australian of the Year should be somebody who is an advocate for a better and healthier society. But an advocate for tobaccco is simply someone who knows that they are supporting a product that when used as directed will shortern the life of two-thirds of its users by 10 years. That such a person should be given this honour is a blight on the system.”

Mike Daube, a leader of the anti-tobacco movement for more than four decades, said he too was appalled. The professor of public health at Curtin University in Western Australia said Crosby was a known tobacco lobbyist.

“Lynton Crosby’s companies have reportedly worked for many years for companies such as British American Tobacco and Philip Morris, including lobbying on plain packaging in both Australia and the UK,” Daube said.

“Surely the Australia Day Foundation trust could have found better people to honour – for example the many Australian doctors, nurses and scientists who work in the UK on saving lives, not contributing to the work of the world’s biggest drug peddlers.”