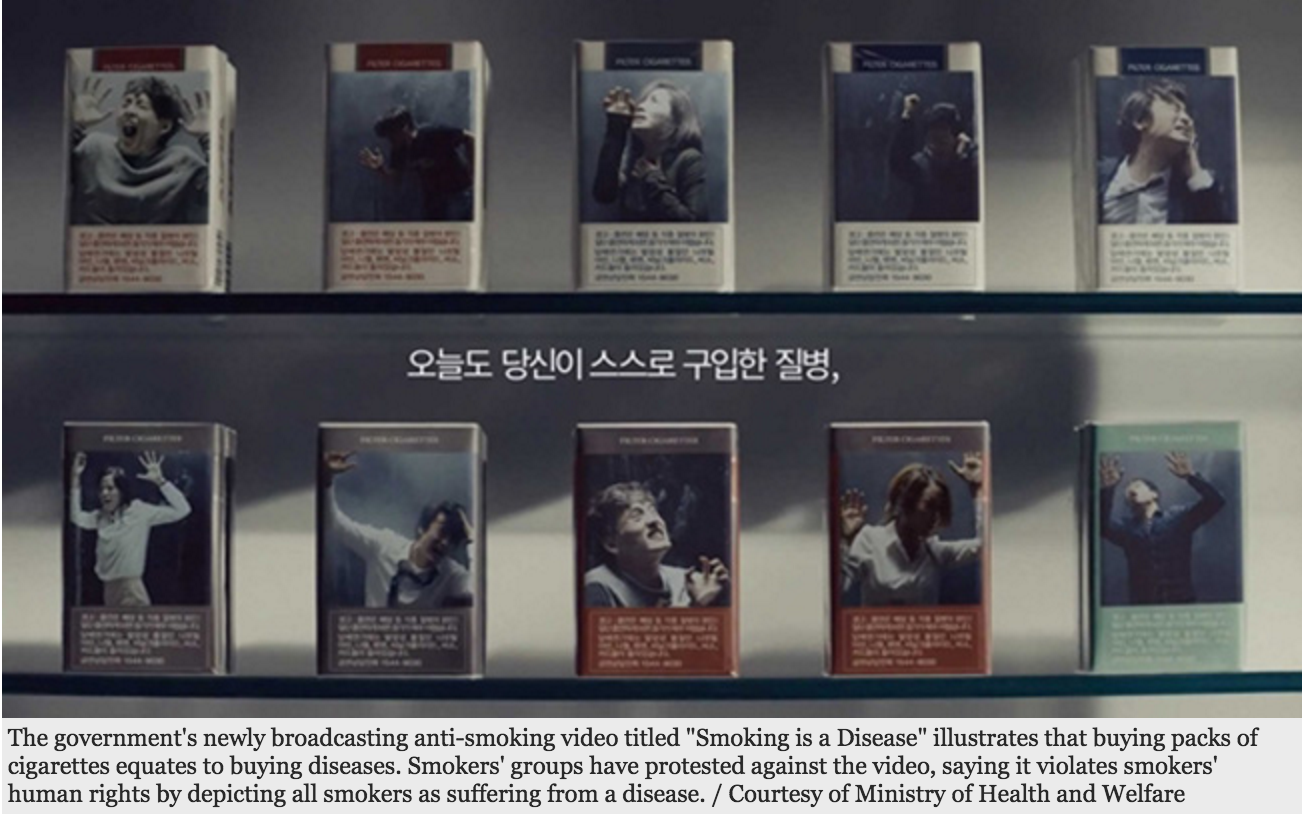 The nation’s largest smokers’ group, “I Love Smoking,” which has some 100,000 members, said Wednesday that the Ministry of Health and Welfare “has violated smokers’ human rights by branding smoking, which is a personal preference, as a sin.”

“The ministry’s video has clearly crossed the line,” the group said in a press release.

It said that the video shows every smoker suffering from a disease. “If smoking is a disease, drinking is a disease because it causes liver problems and eating fast food is also a disease as it brings about obesity, and riding cars is more than a disease but a disaster,” the group said. “It is a jump of logic and discriminates against smokers.”

The ministry released its first anti-smoking video titled “Smoking is a Disease” on Aug. 17, and the second has been aired since Nov. 16.

In the new one, customers tell a convenience store clerk, “Give me a 1 milligram of laryngeal cancer,” “Give me a lung cancer” or “Give me a stroke,” and then they receive a pack of cigarettes.

“Every adult can buy and smoke tobacco freely. It’s a legitimate right to pursue happiness guaranteed by the Constitution,” group leader Lee Yeon-ik said. “The footage describes smokers as disgusting people, infringing on their basic human rights and humiliating them.”

Lee said the government collects a huge amount of tax through tobacco sales.
From Jan. 1, the government hiked the price of a pack of cigarettes to 4,500 won ($4.30) from 2,500 won.

The measure was to discourage Korea’s high smoking rate — 36.2 percent of Korean men smoke as of 2013, the third highest among the Organization for Economic Cooperation and Development (OECD) nations. But recent research shows that the smoking rate has not been reduced much since the price hike.

“While it is making up tax revenue shortage by increasing tobacco price, we wonder if it has the right to release such a video criticizing smokers,” Lee said.

The group will stage a rally in front of the Ministry of Health building in Sejong, Thursday. It will submit a written opinion calling on the government to stop broadcasting the video to the ministry and the Korea Communications Standards Commission.