SHAREHOLDERS of the biggest business in the region met behind closed doors at a Bristol hotel yesterday. Nothing controversial in that, you might think.

But this business is Imperial Tobacco, the Bristol-based cigarette maker behind brands such as Davidoff, Lambert & Butler, West, Golden Virginia and Rizla.

A group of about 25 young people staged a loud, if otherwise peaceful, protest against the firm’s trade in general and a deal they claim it has struck with the government in Laos, South East Asia, to lower tax on tobacco in particular. Something the firm refutes.

Among their number were several Bristol University medical students, including 20-year-old Rachel Shellien, who said: “Lots of people don’t have the power that we do in the UK to make a change, so it’s our responsibility to speak out.” 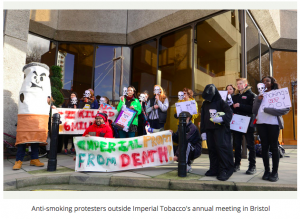 Although the meeting was closed to the public, a few protesters were inside, either having become shareholders or been nominated as proxies for other shareholders.

Among them was Clemmie Stebbings, a medical student at Bristol University whose mum founded an anti-smoking charity.

Clemmie said: “We lost Mum to the devastating consequences of smoking when I was just 12.

“This was my first step to appreciating how widespread and destructive the impact of smoking and tobacco consumption can be.

“When people start smoking they’re teenagers, they know it’s bad for them but they don’t really appreciate the harm it can do them and their families later on. There is more that we can do across the world to ensure that teenagers never start smoking. I am so pleased to be part of a group of young people standing up to the tobacco industry.”

Daniella Radice, Bristol’s assistant mayor for neighbourhoods, joined the protest outside the Bristol City Centre Marriott Hotel. She said: “Smoking kills, it’s that simple. As we become more and more aware of the dangers and put in more controls in this country Imperial Tobacco is searching for profits overseas.

“I am looking forward to the new regulations on plain packaging and outlawing smoking in cars with children which will help dissuade people from smoking in this country.”

The protest was led by anti-smoking group Ash.

Inside, shareholders voted to back Imperial’s deal to buy a number of brands being sold by merging American rivals Reynolds and Lorillard including the Blu e-cigarette name.

Addressing the claims about Laos, chairman Mark Williamson told the meeting: “Before turning to the formal business of the Meeting I’d like to respond to allegations that have been made about our operations in Laos, specifically that we have a ‘special tax deal’ with the Lao Government whereby excise tax on tobacco has been capped for 25 years.

“This is not true.In 2001 we entered into a long-term joint venture agreement with the Lao Government and our investment effectively saved the state-owned tobacco manufacturer from bankruptcy. The government benefits from a 47 per cent holding in the business and we continue to enjoy an excellent working relationship.

“Our partnership continues to go from strength to strength and as you’d expect, the original agreement between us has evolved over the years.There is no special tax deal and excise on tobacco has not been capped for 25 years.

“The government raised tobacco excise in 2010 and 2011; on average this increased the excise on a pack of cigarettes by 280 per cent and led to a significant increase in the retail price.

“We’re proud of the business we’ve built in Laos and I’m delighted to have this opportunity to set the record straight.”
Read more: http://www.bristolpost.co.uk/Anti-smoking-protest-outside-Imperial-Tobacco/story-25936429-detail/story.html#ixzz3QBkC7Os2