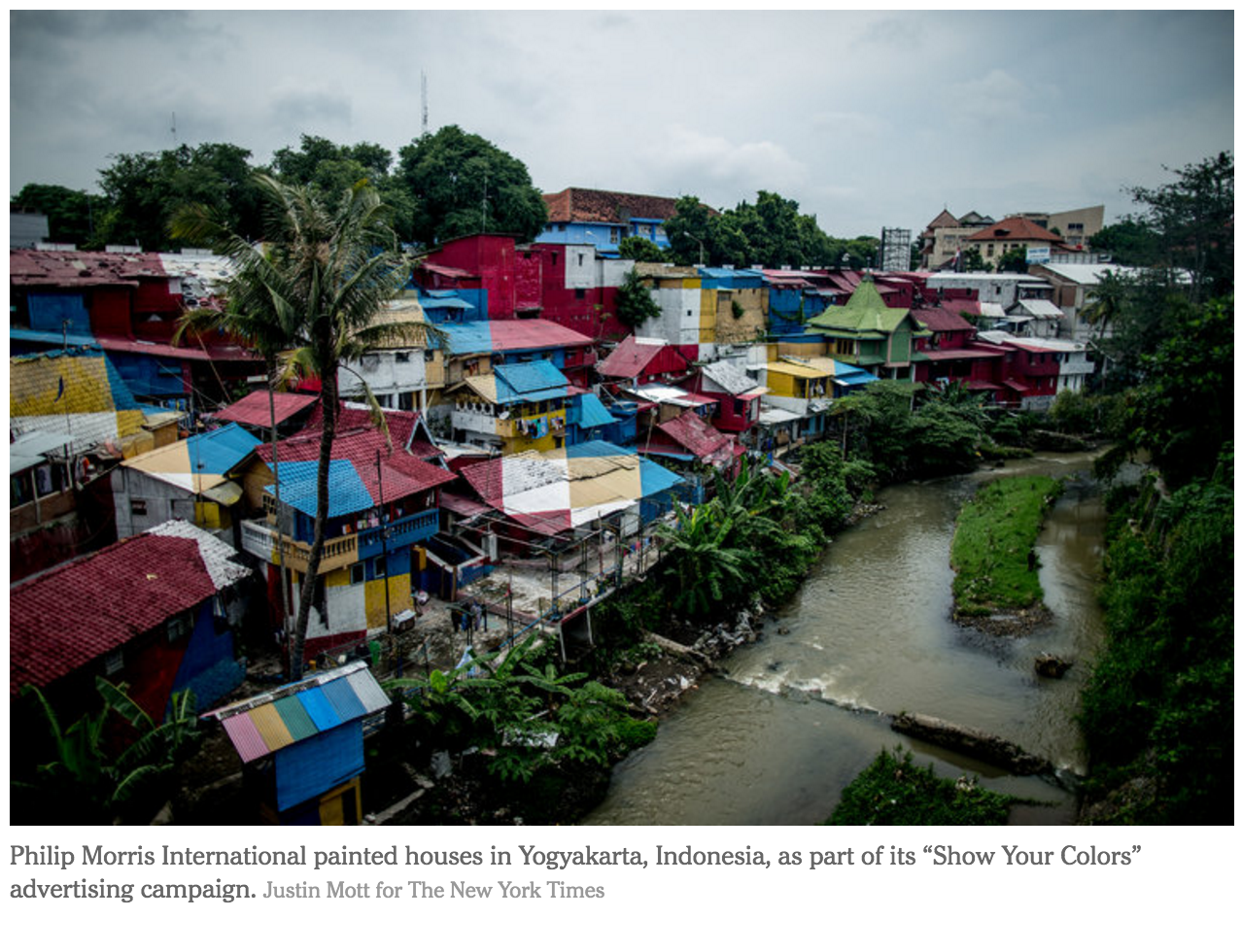 JAKARTA, Indonesia — The densely packed houses along Yogyakarta’s Kali Code River went from drab to a riot of reds, blues, yellows and whites.

Residents did not know who had paid for the elaborate painting job last year. The Yogyakarta press speculated that an unknown company had painted the houses so they would resemble the colorful favelas of Rio de Janeiro.

It turns out the village’s benefactor was Philip Morris International and its “Show Your Colors” advertising campaign. On the side of the Gondolayu bridge that overlooks the settlements sits a giant picture frame, with tag lines hung above it reading, “Create your own story” and “Go ahead.”

The village had been transformed into a giant advertisement for a brand owned by the tobacco company.

The ads were another aggressive marketing attempt by an international tobacco company to gain market share in Indonesia. The country is the second-largest cigarette market in Asia after China, and had the highest male smoking rate in the world — 67 percent, according to a 2011 survey — thanks in part to the popularity of pungent clove cigarettes.

Over the last decade, it has become a last Eden for tobacco companies facing declining smoking rates at home. As late as 2004, international tobacco companies had a marginal presence in the Indonesian market. Today, led by Philip Morris International, they control around 45 percent.

Yet that push has been met by an increasingly potent coalition of mayors, health officials and antismoking groups that has scored some important victories.

In one prominent example, huge cigarette billboards that dominated the highways of Jakarta, the capital, were taken down in 2015, as part of a move to ban outdoor tobacco advertisements by mayors around the country. 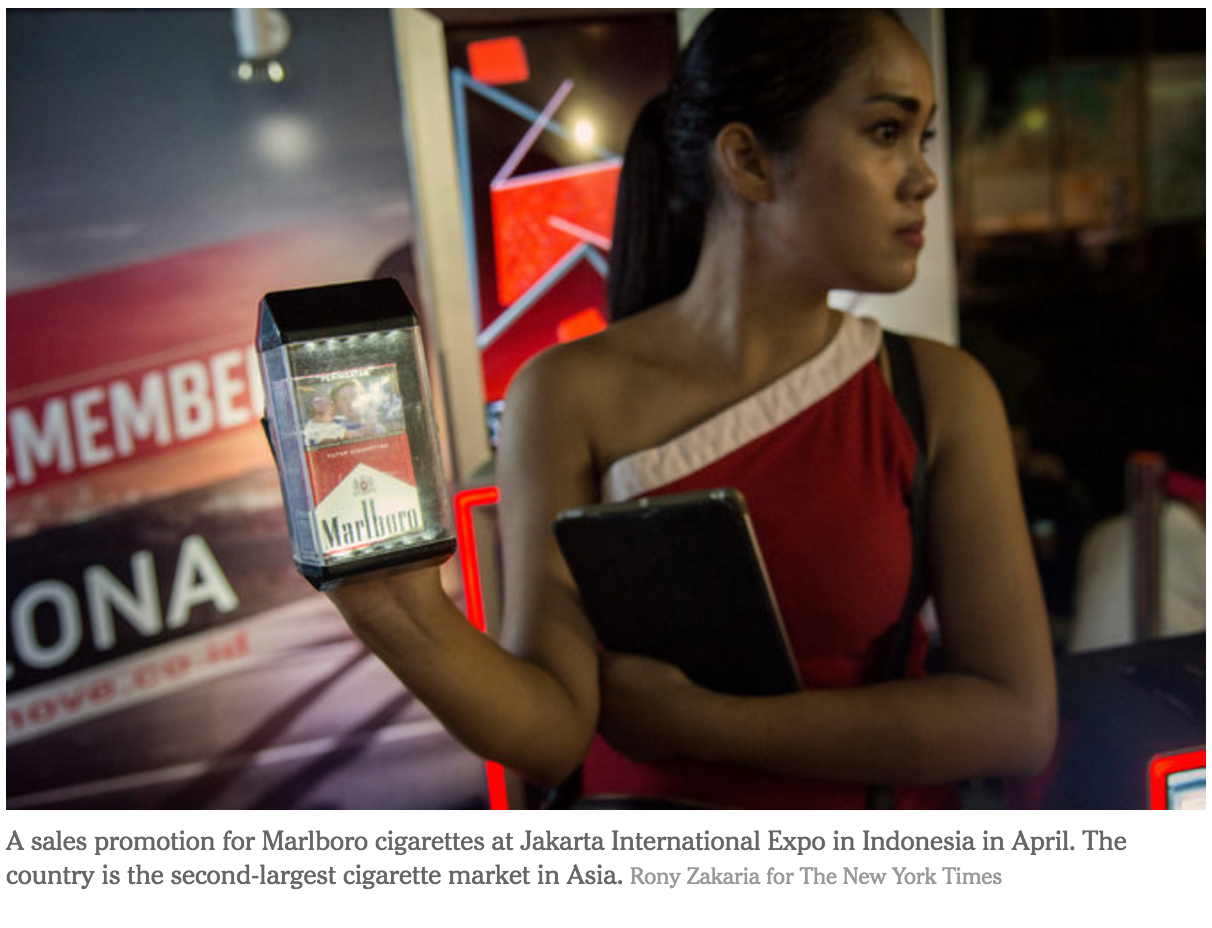 Many of the lobbying efforts that led to local regulations, including in Jakarta, were substantially financed by the Bloomberg Initiative to Reduce Tobacco Use, the $600 million fund founded by Michael R. Bloomberg, the former New York mayor.

The Bloomberg Initiative has designated Indonesia one of its five priority countries, and has donated more than $10 million since 2007. The initiative is largely focused on establishing local and regional tobacco control laws in a nation with a highly decentralized government structure.

“It’s a battle — like a war,” Yayi Prabandari, a professor of public health at Gadjah Mada University in Yogyakarta, said of the clash between tobacco companies and tobacco control organizations.

Before the Bloomberg Initiative became active in the country nearly 10 years ago, fewer than 10 cities had laws that restricted smoking in public areas, according to the Campaign for Tobacco-Free Kids, which jointly administers the Bloomberg Initiative’s grant programs in Indonesia. Since then, the group says, more than 170 cities have passed laws heavily restricting smoking in public spaces.

Yet tobacco growing has deep roots here. Indonesia is one of the few countries in Asia that has not signed the World Health Organization’sFramework Convention on Tobacco Control, which mandates strict limits on tobacco advertising and sponsorship.

The Bloomberg Initiative has also created a backlash from smokers’ rights groups, who portray Mr. Bloomberg as a foreign oligarch determined to stamp out Indonesia’s proud tobacco tradition.

“People who smoke today are stigmatized — we’re discriminated against,” said Alfa Gumilang, the chain-smoking secretary general of Komunitas Kretek, a smokers’ rights group that accepts funds from the tobacco industry.

The Indonesian government relies on the tobacco industry for around 10 percent of state tax revenue. Although tobacco is not nationalized, the government issues growth targets; in 2015, the Industry Ministry released a “road map” for the industry calling for expanded cigarette production. 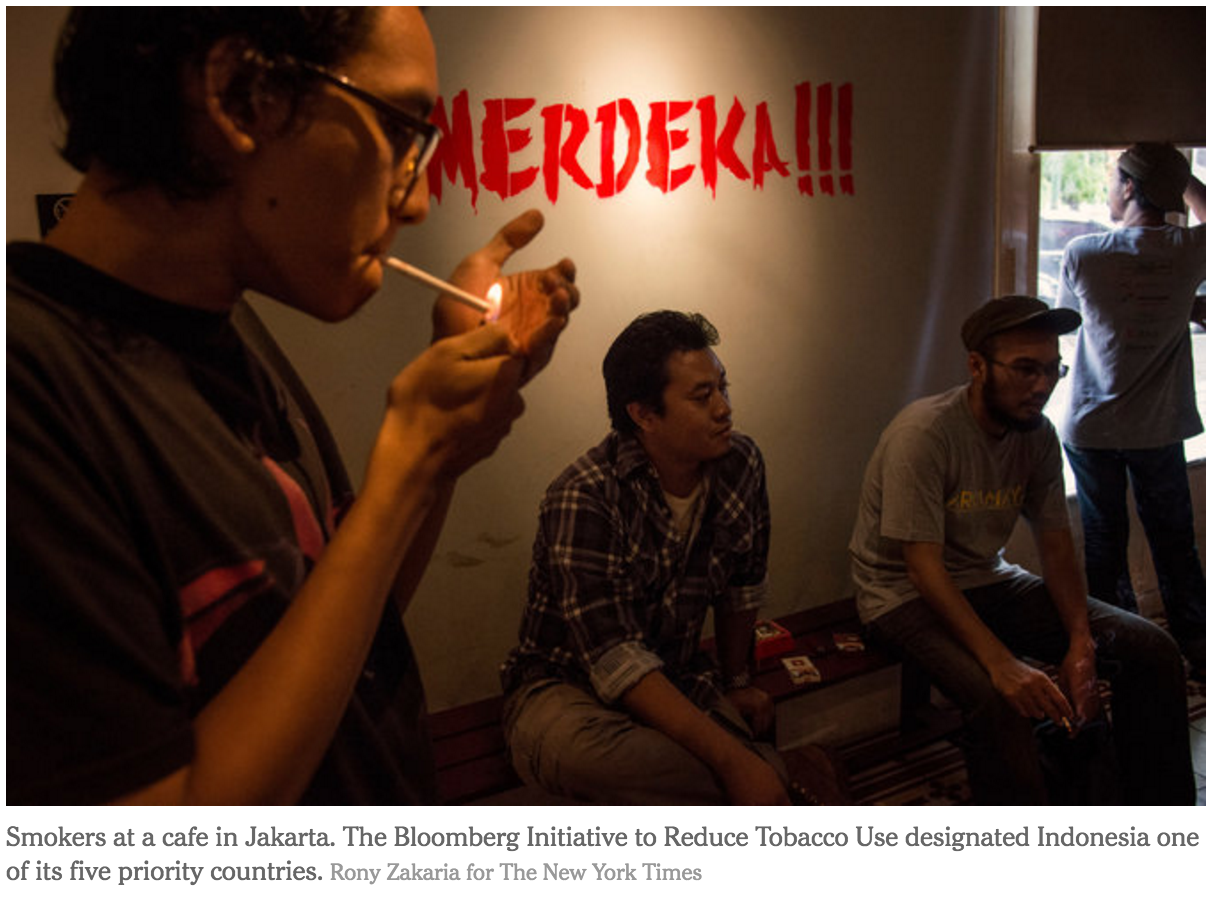 In October, President Joko Widodo visited the United States to promote American investment in Indonesia. While he was there, Philip Morris announced a $1.9 billion expansion of its tobacco factories in the country — the second-largest investment that Mr. Joko secured from an American corporation during his visit.

Because of the difficulty of making sweeping changes to tobacco control laws nationally, Indonesia tobacco control advocates are increasingly pushing for changes at the local and regional levels, where money from the Bloomberg Initiative comes in handy.

Dr. Theresia Sandra, a specialist in chronic lung disease at the Health Ministry, credits the Bloomberg Initiative with helping local governments counter the influence of big tobacco. The group “builds organizations to balance against the strength of industry and opens local governments to the necessity of protecting their communities,” Dr. Sandra said.

In one national success, the Indonesian government, with help from the Bloomberg Initiative, passed a law in 2014 requiring manufacturers to put warning labels on cigarette packaging.

The tobacco fight in Indonesia, the world’s most populous Muslim nation, even extends to the country’s most powerful Muslim organizations, and shows just how central the issue is for society and the economy.

Muhammadiyah, Indonesia’s second-largest Muslim organization, became the first major Muslim group in the country to issue an edict declaring that smoking is forbidden in all circumstances, citing smoking’s devastating consequences to public health.

The 2010 decision was significant: Muhammadiyah operates thousands of schools, universities and hospitals around the country. Almost overnight, those places became smoke-free zones.

But the Indonesian media quickly pounced on a funding detail. Posted on the Bloomberg Initiative’s website was a $393,000 grant to Muhammadiyah in 2009. According to Bloomberg’s website at the time, the grant sought “the issuance and dissemination of religious advice on the dangers of tobacco use among Muhammadiyah/Islamic institutions.”

Critics accused Muhammadiyah of seeking to unite Muslim opinion against tobacco in return for the grant money.

Dr. Sudibyo Markus, who led Muhammadiyah’s health department at the time, said there had never been any quid pro quo.

Meanwhile, religious leaders affiliated with Nahdlatul Ulama, Muhammadiyah’s main rival, criticized Muhammadiyah for supposedly bowing to Bloomberg’s money. But Nahdlatul Ulama, which does not view smoking as forbidden in most circumstances, receives funding from the foundation wing of Djarum, Indonesia’s third-largest tobacco company.

The group’s vice chairman, Maksum Mahfudh, said there was “no relationship whatsoever” between the funding and its decision that it would not forbid smoking. He added that moving “drastically” against tobacco would impoverish the farmers and sellers who are “grass-roots people of N.U.”

For now, the two sides appear to have fought to a draw. After steadily rising for a decade, the smoking rate has plateaued, according to the Indonesian Family Life Survey, funded by the United States National Institutes of Health, that was released in April.

“We remain optimistic about the profit growth opportunities in this key market thanks to its growing adult population and rising income levels,” he told them.