Raising tobacco tax sufficiently high to make tobacco products less affordable is one of the most potent and cost-effective strategies to reduce tobacco use and save lives, encouraging current users to quit or reduce consumption and discouraging youth from starting.

“Although this is a positive development, Thailand still faces a problem as smokers may switch to cheaper products and brands such as hand-rolled cigarettes that are taxed very low and are sold cheaply in the market. Unfortunately these cigarettes are still very affordable in Thailand.” she added.

“Since Thailand is a party to the WHO Framework Convention on Tobacco Control (FCTC), the government should also take into account the FCTC Article 6 Guidelines (Price and tax measures to reduce the demand for tobacco) in strengthening tobacco tax policy. Annual increases of tobacco tax to reduce affrodability of tobacco products and taxing all tobacco products similarly can solve the current problem of smokers switching to cheaper alternatives,” remarked Ms. Ratanachena.

In 2014, The National Statistics Office of Thailand revealed that the number of Thais smokers over 15 years old had risen to 11.4 million, up by 21 per cent from 2013 due to the population growth while tax increase is not regularly enough (the latest increase was in 2012). Every year, there are 50,710 deaths related to tobacco use. 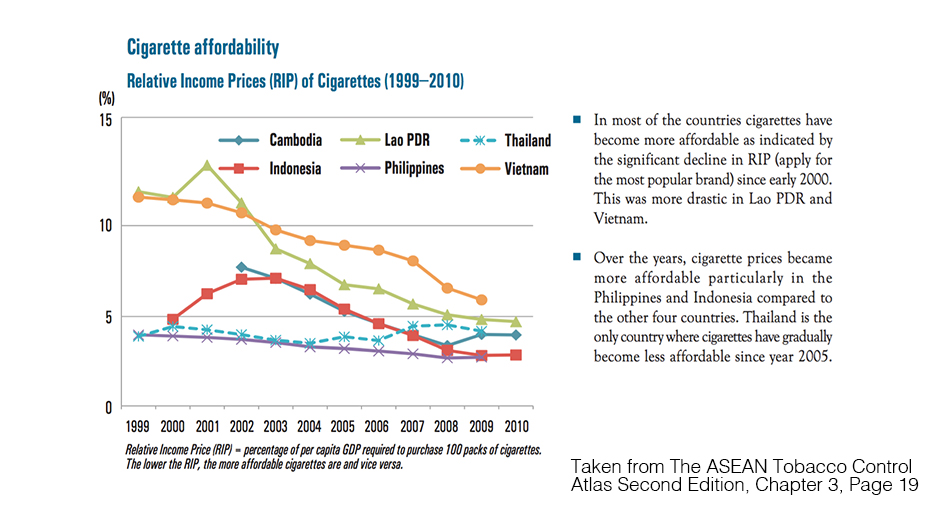