Juul Labs Inc., the e-cigarette pioneer grappling with negative publicity and government crackdowns in the U.S., is setting its sights on Asia, home to half the world’s smokers.

The San Francisco company in recent months has begun selling its vaping devices in South Korea, Indonesia and the Philippines, and is looking into entering more markets in the region. Asia — with looser tobacco regulations and favorable tax treatments, as well as high cigarette sales volume — has been a lucrative alternative for tobacco giants suffering from falling smoking rates and slowing growth opportunities in developed countries.

“Given the volume of smokers, we view Asia as a high-priority region for the company,” Ken Bishop, Singapore-based regional head for Juul, said in an interview Aug. 22. “What we see is that smokers are very interested in these products. The consumer demand is super high.”

The shift toward Asia comes as the vaping industry faces widespread attack in America, especially for its appeal among young people. The U.S. Surgeon General has called vaping an “epidemic” and the Food and Drug Administration has been investigating the safety of e-cigarettes after reports of seizures. The pressure is increasing after the Centers for Disease Control and Prevention said Aug. 30 it was investigating more than 200 possible cases of severe lung illness linked to e-cigarette use in 25 states, including one death. 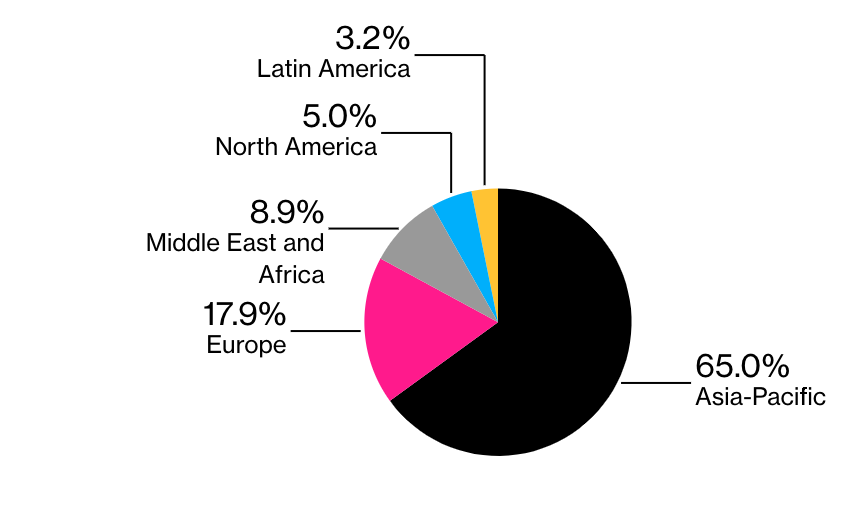 Juul, one of Silicon Valley’s most valuable privately held companies, has made efforts to address the criticism, saying in November it would stop the sale of some fruit-flavored products in retail stores. Chief Executive Officer Kevin Burns last week urged nonsmokers not to start vaping, saying they weren’t Juul’s target customer.

Juul’s vaping products remain popular as the adoption of e-cigarettes surges. Alternative smoking products are emerging as a crucial part of tobacco companies’ survival strategy. As global demand for traditional smokes fades, Big Tobacco is counting on products that it says can help smokers ease off cigarettes. That’s one reason behind the recent disclosure that Philip Morris International Inc. and Altria Group Inc., which has a 35% stake in Juul, are considering a merger.

Going into Asia won’t be easy for Juul. It means navigating a maze of different smoking cultures, socioeconomic levels and regulatory regimes across a slew of countries at various stages of development. Some countries such as Singapore and Thailand ban e-cigarettes, while others are considering restrictions.

“Many of the countries in Asia are struggling to curb their smoking epidemics — and now they are facing an aggressive onslaught of new products,” said Mary Assunta, senior policy adviser for the Southeast Asia Tobacco Control Alliance.

Further complicating matters is the possible Philip Morris-Altria combination. A recoupling of the two giants could be a blessing or a curse for Juul. Philip Morris’s wide distribution channel could help Juul expand faster in Asia, but analysts aren’t so sure how Philip Morris might treat a potential competitor to its IQOS alternative smoking device, which got its start in Asia and has done well in the region.

Philip Morris could be reluctant to help expand the brand, preferring instead to push IQOS and its own vaping products, according to Ken Shea, an analyst at Bloomberg Intelligence. “I’m skeptical they would help Juul unless they saw a path to ownership,” he said. “Why would they spend all this extra money on a brand they don’t own?”

Shea said Philip Morris might look to sell the Juul stake if the company rejects a full takeover bid. Neither tobacco giant has yet proposed a complete takeover of Juul.

Philip Morris and Altria may see the products as complementary, said Euromonitor International analyst Jarred Neubronner. “A certain degree of cannibalization is possible, but ultimately Juul and IQOS represent two different types of next-generation technologies that are likely to appeal to different users,” he said.

IQOS belongs to the heat-not-burn category, which heats a tobacco plug instead of burning it. Juul’s device involves vaporizing liquid nicotine.

Regardless of how Juul’s ownership issues play out, expansion in Asia remains a key strategy. The attraction can be seen in the demographics. Smoking rates in some Asian countries like Indonesia are more than double that of the U.S. The Asian-Pacific market for alternative smoking devices will nearly double to $2.9 billion in the five years to 2023, according to Euromonitor.

Why Asia Is the Next Battleground for E-Cigarettes
Smoking prevalence rates are much higher in Asia than in the U.S.

“The e-vapor market in Asia Pacific is currently small compared to cigarettes,” Neubronner said. “Growth can be driven by health-conscious consumers and a willingness by millennials to experiment with new products.”

Juul believes it has an advantage by gaining early entry.

“We’ve looked at every country in Asia,” said Bishop. “When we started, we wanted to be thorough, so we invested a lot of time and energy to making sure that we understood the landscape.”

He spoke before the Altria-Philip Morris talks were disclosed. Juul declined to comment about the possible merger of Altria and Philip Morris.

A major battleground is South Korea, with British American Tobacco Plc and Japan Tobacco Inc. releasing high-tech devices this summer, after Juul began selling its products there in May. South Korea was one of the first markets Philip Morris chose when expanding IQOS sales in Asia beyond Japan, and local player KT&G Corp. has its own device. By the end of the year, Juul expects to have nationwide distribution in convenience stores, according to Bishop.

While Juul dominates the U.S. vaping market, it isn’t particularly well-known overseas. Juul has yet to find a way into China, the world’s biggest tobacco market, which is controlled by state monopoly China National Tobacco Corp.

Another complicated market is Japan. The liquid nicotine that’s used in Juul’s vaping system is highly regulated in Japan, and an e-cigarette market has never been cultivated in the country. Instead, Japan is the most developed market for heated smoking devices such as IQOS.

Nevertheless, Bishop said Juul is in the early stages of exploring Japan. Getting access would mean butting heads with Philip Morris, which controls 17% of the country’s tobacco market with IQOS. Chief Executive Officer Andre Calantzopoulos has spent billions of dollars on the development of IQOS, which made its debut in Japan in 2014.

Juul may have better prospects in Southeast Asia. Juul has a head start in Indonesia, having entered the market in July with local partner PT Erajaya Swasembada Tbk, a distributor of Apple Inc.’s iPhones. Bishop said Juul also has a small team on the ground in India, and that New Zealand is a point of interest.