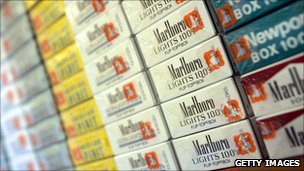 Australia says the new packaging laws will reduce the number of smokers
Laws banning brand labels on cigarette packaging have been passed by the Australian Senate, their last key hurdle before coming into effect.

The move removes brand colours and logos from cigarette packaging.

Instead, cigarettes will be sold in olive green cartons with graphic images warning of the consequences of smoking.

The legislation now returns to the lower house for a vote seen as a formality, before coming into force in December 2012.

Tobacco companies have said that they will challenge the law, but the Australian government said it would not be deterred.

“We’re not going to be bullied into not taking this action just because tobacco companies say they might fight us in the courts,” Health Minister Nicola Roxon said.

“We’re ready for that if they do take legal action.”

Australia is the first country to introduce these kind of laws.

“It will give our country the best chance of having the lowest smoking rates and, of course, that will mean many lives are saved and many families that don’t go through the grief and pain of seeing someone die because of a tobacco-related illness,” Ms Roxon said.

The legislation was amended in the Senate and so must return to the lower house in two weeks’ time.

A spokesman for the tobacco industry warned that the government will likely have to spend a considerable amount fighting legal challenges to the new laws.