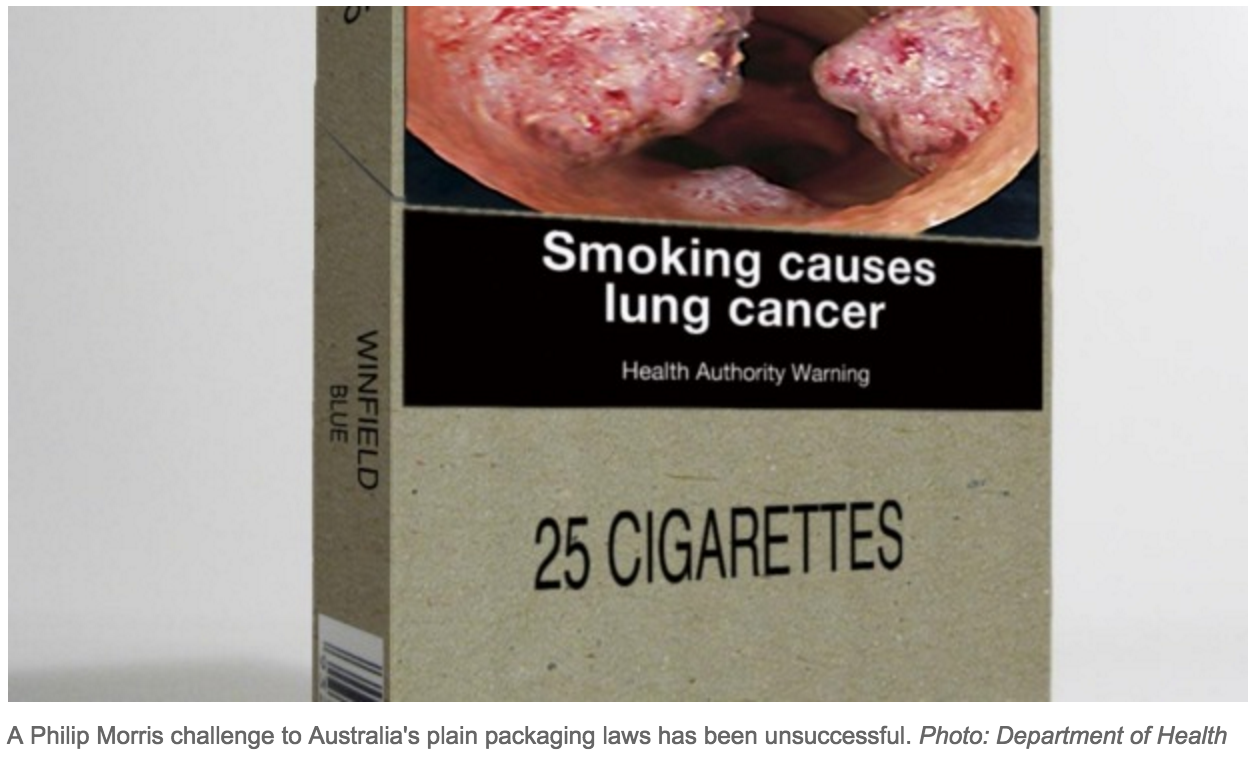 It means the former Gillard government’s plain-packaging laws, introduced in 2011, will remain in place.

The tribunal in the arbitration, based in Singapore, has issued a unanimous decision agreeing with Australia’s position that it has no jurisdiction to hear Philip Morris’s claim.

Philip Morris has slammed the decision, saying it does not validate plain packaging in Australia or anywhere else.

“It is regrettable that the outcome hinged entirely on a procedural issue that Australia chose to advocate instead of confronting head on the merits of whether plain packaging is legal or even works,” Marc Firestone, Philip Morris international senior vice president, said in a statement.

Fiona Nash, Minister for Rural Health, has welcomed the decision, saying plain packaging is a legitimate public health measure which is consistent with Australia’s international obligations.

“We welcome the unanimous decision by the tribunal agreeing with Australia’s position that it has no jurisdiction to hear Philip Morris’ claim,” Ms Nash said.

“The Coalition government has powered ahead with plain packaging and invested in reducing smoking rates across the board.”

The Public Health Association of Australia has also welcomed the decision.

The confidentiality protocol governing the arbitration means that the substance of the decision cannot be published at this stage.

The body responsible for the arbitration – the Permanent Court of Arbitration – will publish the decision on its website once issues regarding confidentiality have been resolved.

It means the arbitration is over, other than any proceedings related to the recovery of Australia’s cost, and subject to any appeal Philip Morris Asia may seek to institute in Singapore.

It is understood the federal government has received legal advice saying such a challenge would likely be unsuccessful.

It was the first investor-state dispute brought against Australia.

It challenged Australia’s tobacco plain packaging legislation under a 1993 agreement between the Commonwealth government and the government of Hong Kong for the promotion and protection of investments.

Philip Morris Asia argued that Australia’s tobacco plain packaging measure constituted an expropriation of its Australian investments in breach of Article 6 of the agreement.

It further argued that Australia’s tobacco plain packaging measure was in breach of its commitment under Article 2(2) of the agreement to accord fair and equitable treatment to Philip Morris Asia’s investments.

It also asserted that plain packaging constituted an unreasonable and discriminatory measure and that Philip Morris Asia’s investments had been deprived of full protection and security in breach of the agreement.

The tobacco company on Friday attacked the federal government’s plain packaging laws, saying they have failed to deliver the promised health results.

“Australia’s former Labor government made bold promises regarding the public health benefits that its excessive, expropriatory trademark ban – which it labelled a policy experiment – would yield,”  it said in a press release.

“Three years into the experiment, data from a range of sources consistently demonstrate that the promised outcomes are not being delivered.”

But PHAA chief executive, Michael Moore, says the laws have been working.

“Smoking in Australia is falling in adults, in children and by tobacco volume sales,” Mr Moore said.

“Now the tobacco companies have lost another crucial legal bid to stop this life-saving measure. The message is loud and clear – plain packaging works, and it is here to stay”.