In 2004, the WHO Western Pacific Regional Office (WPRO) presented the World No Tobacco Day Award to SEATCA. The Award is in recognition of its major contribution to tobacco control in the region.

control in the South East Asia Region, especially with regard to policy and legislation.” Dr. Shigeru Omi, Regional Director for the Western Pacific Regional Office at the presentation of 2004 World No Tobacco Day Awards.

WHO-WPRO has since engaged SEATCA to provide technical assistance directly to government officials across the region.

In 2014, SEATCA was given the ‘WHO Director-General Special Recognition Award for Contribution to Global Tobacco Control’ in conjunction with the World No Tobacco Day Awards. SEATCA was recognised for playing a key role in promoting tobacco control initiatives and policies regionally especially in the area of tobacco taxation. Since 2009, through its Southeast Asia Initiative on Tobacco Tax (SITT), SEATCA has collaborated with the ASEAN countries to assist them in achieving tax policy reforms to reduce tobacco demand. 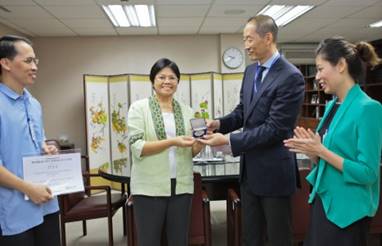 Dr Bungon Ritthiphakdee, Director of the SEATCA, received the award from Director of Programme Management, Dr Takeshi Kasai, on behalf of the Regional Director, Dr Shin Young-Soo at WHO Regional Office for the Western Pacific on 26 August 2104.
See: http://www.wpro.who.int/tobacco/wntd/2014/award/en/