I am a frequent visitor to Jakarta and while traveling along the road from the airport to my hotel, I saw a huge billboard advertisement for a new brand of cigarette. The art work was unimpressive, but it had a health warning on smoking. 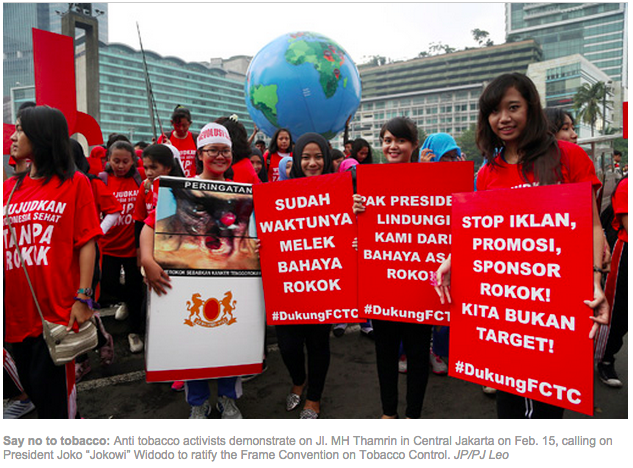 The brand is among the top selling cigarette brands in China and is now spreading its sales globally. China is the world’s largest producer of tobacco, controlling more than 40 percent of the world cigarette market.

Already, tobacco imports into Indonesia are increasing every year, including leaves from China. Now enters the Chinese dragon to clamor for the 63 million Indonesian smokers.

Sadly, the public health community’s valiant effort to protect people, especially children and the poor, from tobacco use has come under attack. The tobacco industry has mobilized farmers to brand health advocates the “enemies of farmers”. The industry claims, without proof, that many millions of tobacco growers and workers will become unemployed. But who is the real enemy of the local tobacco growers?

A few misinformed researchers and individuals have labeled the global tobacco treaty, the World Health Organization Framework Convention on Tobacco Control (WHO FCTC), as a “western conspiracy” to sell pharmaceuticals. They are oblivious to the real enemy of the people, which is the dragon-like tobacco industry breathing out a trail of destruction for the medical profession and the Health Ministry to clean up.

About 4 million Indonesian children are smoking and children under 10 years addicted to cigarettes are commonplace. Indonesia must do better to protect its people, especially children, from the totally preventable 200,000 deaths every year from tobacco-related causes.

Tobacco advertising must be banned nationwide. Indonesia should accede to the FCTC as soon as possible.