As the country opens up to foreign multinationals, tobacco giants are staking a claim.
Lim Li Min Last updated: 20 Nov 2013 06:05 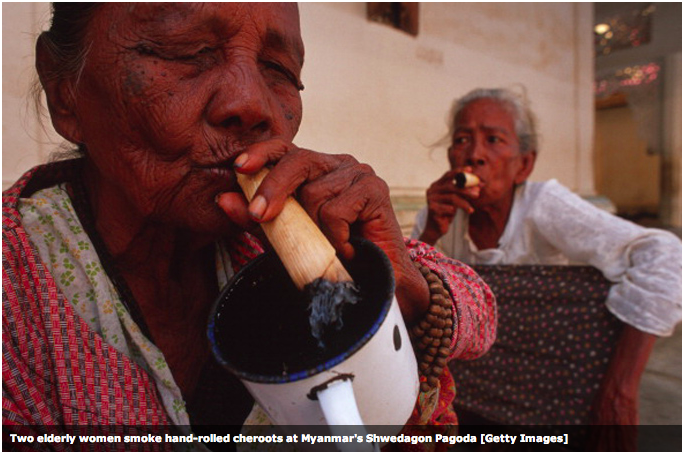 A smoky haze greets customers walking into any of Yangon’s tea shops as patrons light up hand-rolled cigarettes known locally as cheroots.

Tobacco is already a problem in this impoverished Southeast Asian country where anti-tobacco legislation is weak. But as Myanmar opens its doors to the world after half a century of military rule, it faces a new threat: Large multinational cigarette companies looking for new markets.

After years of isolation, many young people want to be as “cool” as their Western peers. “I wanted to imitate the people I saw in movies,” said Kyaw Zin Lin, 42, who began smoking at age 12. He got his first packet of cigarettes from his parents’ grocery shop. “It seemed cool then.”

Some anti-tobacco activists say it’s not just the nation’s health that is at risk from the tobacco companies’ new push, but also the rights of some of Myanmar’s poorest people.

At the heart of the problem lies a conflict of interest within the government. The health ministry is trying to implement measures to curb smoking, but the trade ministry is keen to lure millions of dollars in potential foreign investment by multi-national companies, says Bungon Rithiphakdee, director of the Southeast Asian Tobacco Control Alliance.

Activists say between one-third and half of Myanmar’s 60 million people consume tobacco in some form. Most people in Myanmar get their tobacco fix by chewing it in betel leaves and smoking cheroots. Filtered cigarettes tend to be seen mainly in cities.

About 45 percent of Myanmar’s population is below the age of 24 – a prime target group for cigarette companies.

Only 9.2 percent of smokers use Western-style filtered cigarettes, according to Myanmar’s ministry of health, and that is the reason foreign manufacturers see an opportunity to boost sales that are plateauing or falling in more developed markets.

The cancer ward at Yangon’s main hospital is usually crowded, and the World Health Organisation estimates one in five deaths in Myanmar is attributed to smoking.

Cigarette sales are expected to grow at between 2-3 percent a year for the next four years, according to Shane MacGuill, a tobacco industry analyst at research firm Euromonitor.

China’s largest tobacco manufacturer and the world number five, the HongyunHonghe Tobacco Group, and its local partner have a factory capable of producing three billion cigarettes a year, and employ “highly qualified marketing managers and taskforces of salespersons, and with sufficient promotional sales and distribution vehicles”, according to its website.

British American Tobacco, the world’s second-largest cigarette company, plans to invest $50m over the next five years, and employ about 400 people. Japan Tobacco International, which is number three globally, says it is in the process of setting up business in the country but declined to comment further.

“Local cigarette firms are no match. Foreign tobacco companies will go into the region as quietly as possible and say to governments: ‘We’ll help with the manufacturing process …  provide jobs,'” said Judith Mackay, a senior adviser to the World Lung Foundation, which works to help eradicate diseases such as tuberculosis.

“Many countries don’t have trade lawyers, financial people to challenge [these multinationals]. In 10 years Myanmar will get up to speed [with its legislation enforcement] but right now it is very vulnerable.”

Myanmar ratified the World Health Organisation Framework Convention against Tobacco Control in 2004, but legislation is poorly enforced, and the country has failed to implement some of the WHO’s guidelines. These include pictorial health warnings on cigarette packs and a 65 percent tax levy. Smoking in public places has been banned since 2006, but fines for flouting the law are negligible.

Tobacco companies in Myanmar get around direct advertising bans through their corporate social responsibility arms giving educational grants or sponsoring orphanages, say activists. And despite promises not to market to youth, cigarette companies regularly back entertainment events such as rock concerts and the annual water-throwing festival, giving out free packets to young people there.

“We are a legitimate company selling a legal product, and we conduct our business in a professional and responsible way – abiding by the laws in all the countries we operate in, often going further than what the law requires through our own International Marketing Principles, which include restrictions on our product activities on youth smoking,” Baig said. 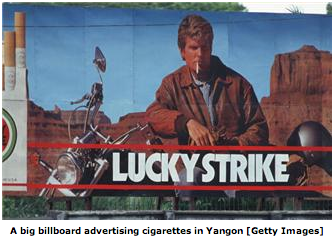 But young people are particularly susceptible to the slick marketing campaigns that only Big Tobacco can muster.

“Transnational tobacco companies in Myanmar bring with them a complete denial of the health evidence along with sophisticated marketing and sponsorship,” the World Lung Foundation’s Mackay said. “They’re wolves in sheep’s clothing.”

Myanmar is already awash with imported foreign cigarette brands such as Camel and Benson & Hedges. But these sell for about three times more than locally made cigarettes.

“If you open a factory in Myanmar, you can sell at a cheap price,” making foreign brands more accessible to cost-and image-conscious consumers, said YarZar Nyunt of the International Union against Tuberculosis and Lung Disease.

“Corruption is a problem and the government is not that concerned with people’s health. They first opened Myanmar to alcohol companies, and now tobacco firms,” he adds.

The Myanmar Investment Commission in mid-2012 decided to invite foreign companies to manufacture alcoholic beverages after decades of tight control over products considered “unsuitable for the public” by the former military government.

Many of these joint ventures have been inked with the country’s most politically connected business elite.

Myanmar’s Ministry of Commerce did not respond to a written request for an interview.

Meanwhile, Myanmar’s Ministry of Health is preparing to introduce tighter controls on smoking. It is working with regional anti-smoking groups to improve its health awareness programmes and plug regulatory loopholes. Campaigners say there’s still widespread ignorance about the practice.

Ko Kyaw Oo, 43, has smoked cheroots and a pack of locally made Red Ruby cigarettes a day for half his life. But he now intends to quit because of breathing difficulties. “I only learnt later that smoking is bad from my school teachers,” he said.

But the foreign companies planning on making inroads in Myanmar aren’t just looking at the local market. Some are planning to grow their own tobacco in Myanmar for export to other Asian countries. This, activists say, could bring agricultural and ancestral land into the sights of the cigarette makers.

Mark Farmener, director of the Burma Campaign, an organisation that lobbied to get British American Tobacco out of Myanmar when it was under military rule, says many farmers have had their lands taken from them to make way for foreign business interests in the past, and this also could be a problem in the future.

Farmener says the global tobacco industry will bring with it a raft of social and human rights issues such as land grabs and poor treatment of workers.

“People in Burma need jobs but they don’t need cancer,” he says. “It’s good to see investment that benefits them, but not investment that’s going to kill them.”