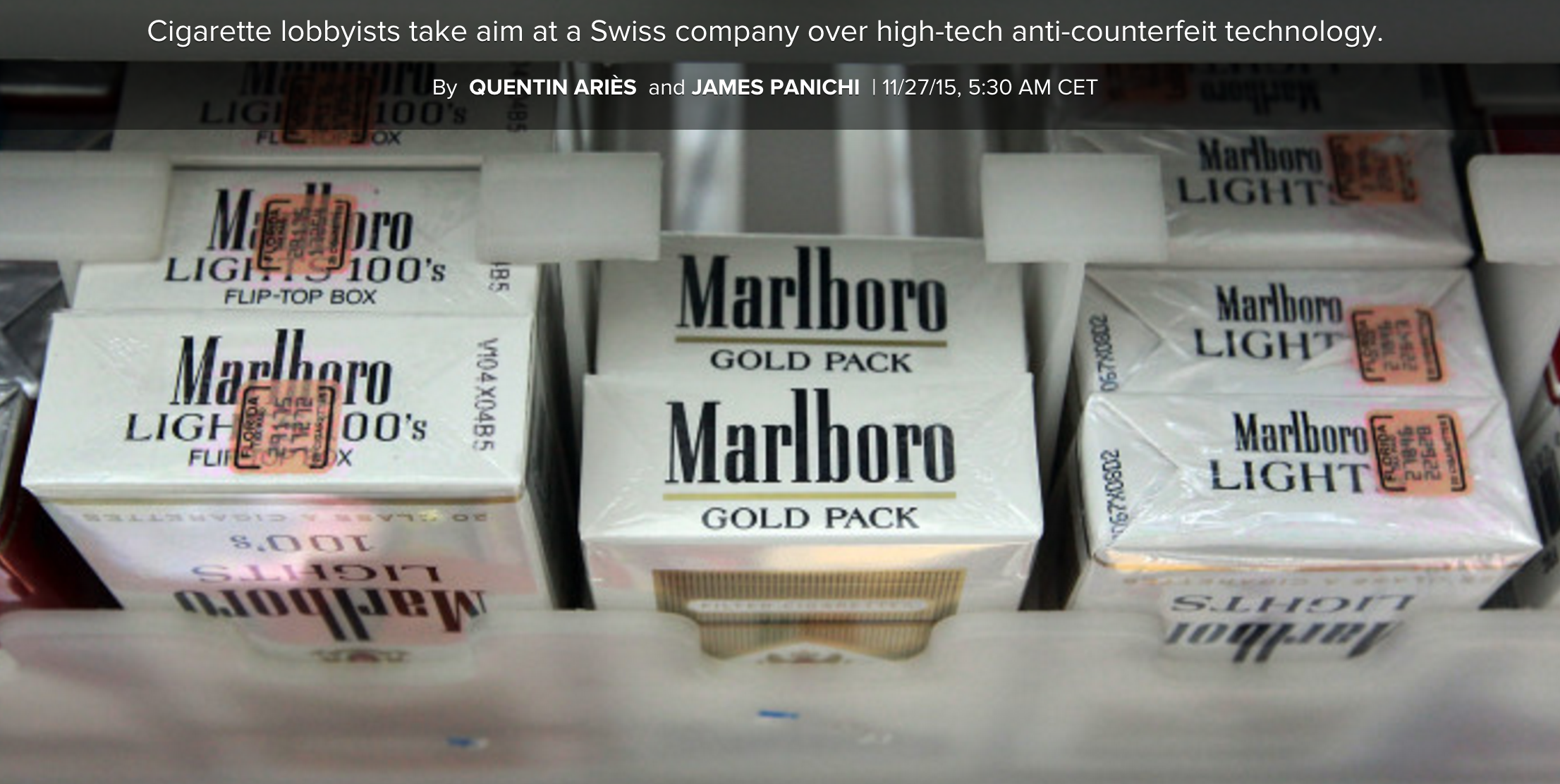 Tobacco lobbyists have joined forces in a bid to stop the European Commission from signing up a Swiss company to provide advanced “track and trace” technology to combat cigarette smuggling.

The fight is intensifying at the EU level as the European Parliament prepares to debate the matter and the Commission nears a long-awaited decision on cigarette packaging.

Tobacco companies, who want to use their own anti-counterfeit measures, argue that if the Commission awards Lausanne-based printing technology firm SICPA the contract, it will be granting it a monopoly that will wreak havoc on the industry.

“If SICPA’s solution is adopted, it would lock out every other provider in the sector,” one tobacco lobbyist said, dismissing the Swiss company as a “printer of banknotes” with little experience in cigarette distribution. “It would set a very unhealthy precedent.”

But SICPA believes there is more to Big Tobacco’s fierce response than concerns about free markets. A company spokesperson said the industry is concerned that a successful campaign to track the distribution of cigarettes across Europe would harm the tobacco companies’ business interests.

“This is what is at stake: A powerful, independent ‘track and trace’ regime would make illicit tobacco trade very difficult,” said a spokesperson for SICPA, a privately owned company that has provided its technology to Brazil, Kenya and a number of U.S. states and which the tobacco industry has opposed vigorously around the world.

“If you don’t want that to happen, you can slow things down,” the spokesperson said. “Or you can replace it with something less effective” — which is what SICPA believes the tobacco lobby wants.

With the Commission preparing a second feasibility study on the decision and lobbyists from all sides preparing to boost their Brussels operations, the European anti-fraud office OLAF has also made a surprise entry into the debate, throwing its support behind the tobacco companies’ model.

At the heart of the dispute are EU moves to implement measures in last year’s revisedTobacco Products Directive that deal specifically with packaging traceability and security features. The measures are designed to prevent the counterfeiting and smuggling of cigarettes, which the Commission estimates result in €10 billion a year in lost revenue.

Under the directive, EU countries will be required by 2019 to “ensure that all unit packets of tobacco products are marked with a unique identifier” which will be “irremovably printed or affixed, indelible and not hidden or interrupted in any form.”

This high-tech marker will contain information including the date and place of manufacture, the machinery used and shipment route to the first retail outlet, as well as the invoice of payment.

The new directive also includes a measure to fight counterfeit through the application of a “tamper proof security feature, composed of visible and invisible elements” affixed to the package.

While a number of companies have expressed an interest in providing technology to help EU countries meet their tobacco packaging commitments, even tobacco lobbyists concede SICPA’s experience in tobacco and alcohol labeling is attractive to regulators.

But the tobacco companies aren’t backing down.

Tobacco companies argue that Codentify is a better option for meeting the requirements of the directive, because it is already up and running in a number of countries where the industry claims it has worked without disrupting distribution.

“The problem with SICPA is that it produces stamps with unique identifiers, but their technology does not conform with the directive,” said a lobbyist working for one of the big four tobacco companies. “Codentify provides a unique marker on the assembly line. It works.”

But a SICPA spokesperson called that claim “a pure piece of misinformation,” adding the Commission’s first feasibility study on the issue, released in May, proves SICPA’s technology meets the requirements.

“The suggestions of a ‘monopoly’ is another propaganda line,” the spokesperson said. “It seems the tobacco industry would like Codentify introduced as a single system.”

However, the European Anti-Fraud Office, known by its French acronym OLAF, has expressed caution at the prospect of SICPA being awarded the contract.

Tobacco contraband specialists at OLAF are afraid the company’s technology, which is largely unknown in Europe, may clash with the tobacco smuggling working agreementsOLAF now has in place with the tobacco industry, the details of which remain secret.

OLAF investigators told POLITICO that with the smuggling agreements set to expire in 2016, this is not the right time to disrupt its working relationship with the industry. The investigators said their efforts to combat illicit tobacco trade, which includes growing black markets, rely on the input of the tobacco industry.

“This system forces tobacco companies to ‘kiss and tell’,” an OLAF investigator said. “They must provide us with intelligence for current investigations because they are objectively accountable.”

The EU’s tobacco products directive was approved in December 2013, following a bitter debate over the degree of access which the Commission granted tobacco lobbyists at the early stages of the legislative process.

The commissioner overseeing the reforms, John Dalli, was removed from office in 2012 over his unreported contact with tobacco lobbyists — a controversy dubbed ‘Dalligate’.

The aspects of the directive addressing “track and trace” technology were part of a worldwide push to adopt packaging technology in a bid to end both the illicit trade and counterfeit of tobacco.

The EU and its member countries are signatories to the World Health Organization’sprotocol to eliminate illicit trade in tobacco products, which requires the establishment of a “tracking and tracing system … for all tobacco products that are manufactured in or imported onto its territory.”

The Commission’s first feasibility study put forward four “track and trace” options: one closer to the Codentify technology promoted by the industry and other options which would place SICPA’s technology in a stronger position.

The Commission now wants a second report, with an official saying in a statement that this “follow-up study [had] the purpose to select one of the models (possibly with modifications and combinations)” and that it aims to go “more in detail in order to achieve a functioning system.”

The call for a second study now has both sides lobbying hard for their own technology, at an EU and a national level, while attempting to undermine each other’s proposal.

SICPA recently signed up to the EU Transparency Register, revealing that it had three full-time staff positions lobbying the institutions, while the four big tobacco companies all have active lobbyists and a range of industry organizations at their disposal.

Tobacco lobbyists point to the fact that SICPA is being investigated by authorities in Brazil over a corruption scandal as evidence the Swiss company is not fit to take on the sensitive “track and trace” role in the EU.

However, SICPA dismisses the tobacco lobby’s campaign as an attempt to wrest control of the tracking process.

“For the tobacco industry, what happens in Europe sets a precedent in the rest of the world,” a spokesperson said. “So, whether it is independent controls or cigarette plain packaging, it appears they want to stop any change. They put a lot of effort into it.”

Meanwhile, anti-tobacco NGOs say while they are not taking sides in the clash, they are afraid the Commission might end up choosing an option which is not transparent and will not give the public access to the data collected through the track and trace process.

“We cannot argue our case on tobacco tracing because we have no data,” said Florence Berteletti, the director of the Smoke Free Partnership, an NGO. “We only have questions, not answers. We have the World Health Organization protocol in place to fight illicit tobacco trade — why don’t we use it?”