Three years ago, the government of Togo, which has a gross domestic product 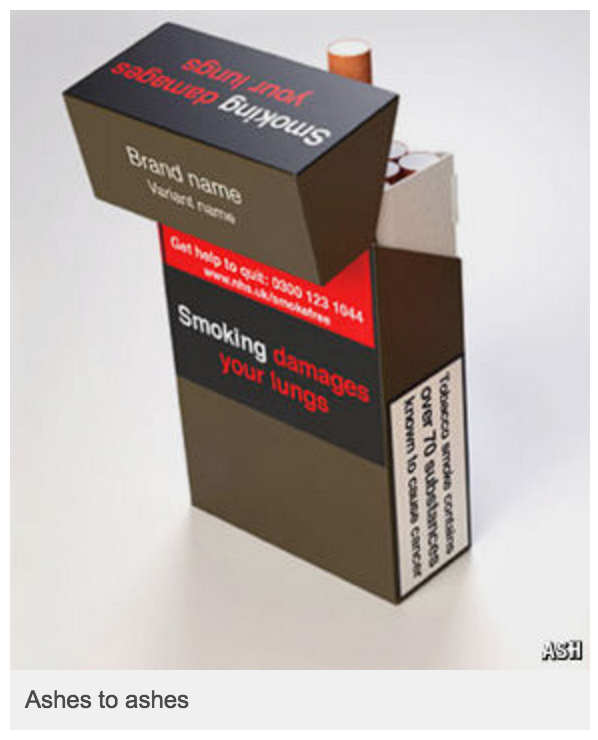 of $4 billion, received a letter from Philip Morris International, a tobacco giant which last year earned revenues of $74 billion. The country had been mulling bringing in plain packaging for cigarette boxes. It would risk “violating the Togolese constitution”, the firm’s subsidiary explained, “providing tobacco manufacturers the right to significant compensation.” It then outlined how plain packaging would violate binding global and regional agreements. Togo was in no position to anger its international partners, it suggested.
For health advocates, such tactics are the last refuge of firms they have long denounced. But tobacco companies will do what they can to protect their packaging. They detest warnings with repulsive images of decaying body parts. In 2010 Philip Morris sued Uruguay, claiming that big warnings on boxes violated a trade deal. Then two years laterAustralia became the first country to go further, banishing iconic trademarks from tobacco packs. Its law mandates that brand names—such as Marlboro, Winfield or Dunhill—appear in grey type against a background of Pantone 448C, a putrid green deemed the world’s ugliest colour by a market-research firm.
So tobacco firms sued—in Australian courts, before a UN tribunal and by supporting countries that challenged the rule before the World Trade Organisation (WTO) on the ground that banning trademarks represents an expropriation of intellectual property (IP). Less formally, they and allies have lobbied against warnings and plain packaging in places ranging from Namibia to New Zealand. It has all been surprisingly effective. Until very recently, Australia has been the only country to ban tobacco trademarks from cigarette packs.
Such avenues may be closing. Although the WTO’s decision is still pending, firms lost their other suits against Australia. Last month arbitrators at the World Bank threw out the lawsuit against Uruguay. In May the European Court of Justice upheld a rule on big warnings and Britain’s High Court confirmed one for plain packaging. It seems likely that more governments will in future prioritise public health over IP. Canada, France and Ireland are already moving towards plain packs.
If so, ugly packaging could become the most damaging rule tobacco firms have faced in years. To date many laws have hurt firms in some ways but also, strangely, helped them in others. Bans on advertising lower their costs. Small competitors, unable to advertise, struggle to grow. High excise taxes can be another boon: when taxes are fixed and large, a big increase in the underlying price of a pack amounts to a relatively small rise in the pack’s total price. High prices have sustained tobacco firms, even as smoking rates decline. “They probably have the best pricing power of any industry,” says James Bushnell of Exane BNP Paribas, a broker.
But plain packaging clamps down on one of their last bits of advertising. The design of the box is where they must convey not only the name of the brand but abstract qualities, such as masculinity or the idea that a product is “premium”, and worth an extra outlay. If such traits are stripped from packs, consumers may choose cheaper brands. That is particularly worrisome in emerging markets, says Mr Bushnell, where standard packs would threaten the aspirational appeal of smoking. Other “sin” industries are worried. The International Trademark Association frets that governments might strip trademarks from junk food and liquor.
It may become pointless for cigarette firms to start legal proceedings. The Trans-Pacific Partnership (TPP), a pending free-trade agreement among 12 countries, shields governments from lawsuits over tobacco rules. It may unravel, but future pacts could have similar terms. Only America, where the right to free speech makes standard packs highly unlikely, may remain an anomaly (though it is a signatory to the TPP). In the past investors often viewed a new wave of rules on tobacco as a chance to buy tobacco stocks inexpensively, before they resumed their steady rise. This time may be different.
Source: http://www.economist.com/news/business/21703424-big-tobaccos-controversial-ailing-crusade-against-plain-packaging-no-logo