The minimum age to buy cigarettes would be raised to 20 and puffers would see other tougher controls enacted under a tobacco-control bill endorsed by the cabinet Tuesday. 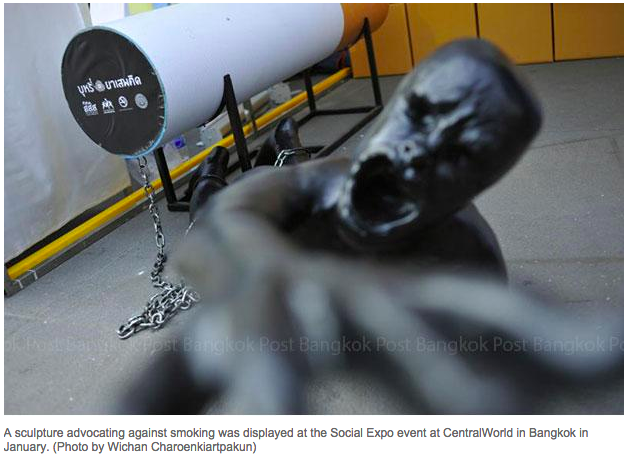 In a move hailed by anti-smoking activists, the cabinet approved in principle legislation that also would outlaw the sale of individual cigarettes, requiring people to buy them by the pack Many small retailers sell cigarettes individually to cater to buyers who cannot afford a whole pack.

The bill would ban manufacturers and importers from sponsoring social activities and models promoting their products would be prohibited.

Deputy government spokesman Maj Gen Sansern Kaewkumnerd said on Tuesday the draft will be sent to the Council of State to double-check it adheres to guidelines issues by the World Health Organization, he added.

The Action on Smoking and Health Foundation expressed no concerns about the decision to allow the state legal-advisory agency to review the draft, saying it was only procedural.

Dr Prakit Vateesatokij, executive secretary of the foundation, said raising the age of buyers will deter youths from smoking due to the increased difficultly of accessing smokes.

Thailand has 11.5 million smokers and sees 100,000 new young smokers start every year. The average age of people addicted to tobacco is 17.4 years, according to the foundation.

The National Alliance for a Tobacco-Free Thailand praised the government’s decision.

“This is an important present that the prime minister has given to the youth and Thai people on the occasion of World No Tobacco Day on May 31,” said Somsri Pausawasdi, the alliance leader, said.

If approved, the bill will replace current tobacco-control and health protection laws on the books since 1992.

Attempts to raise the minimum age of cigarette buyers began in 2011 in a move spearheaded by the Public Health Ministry. The legislation was forwarded to the cabinet in December.