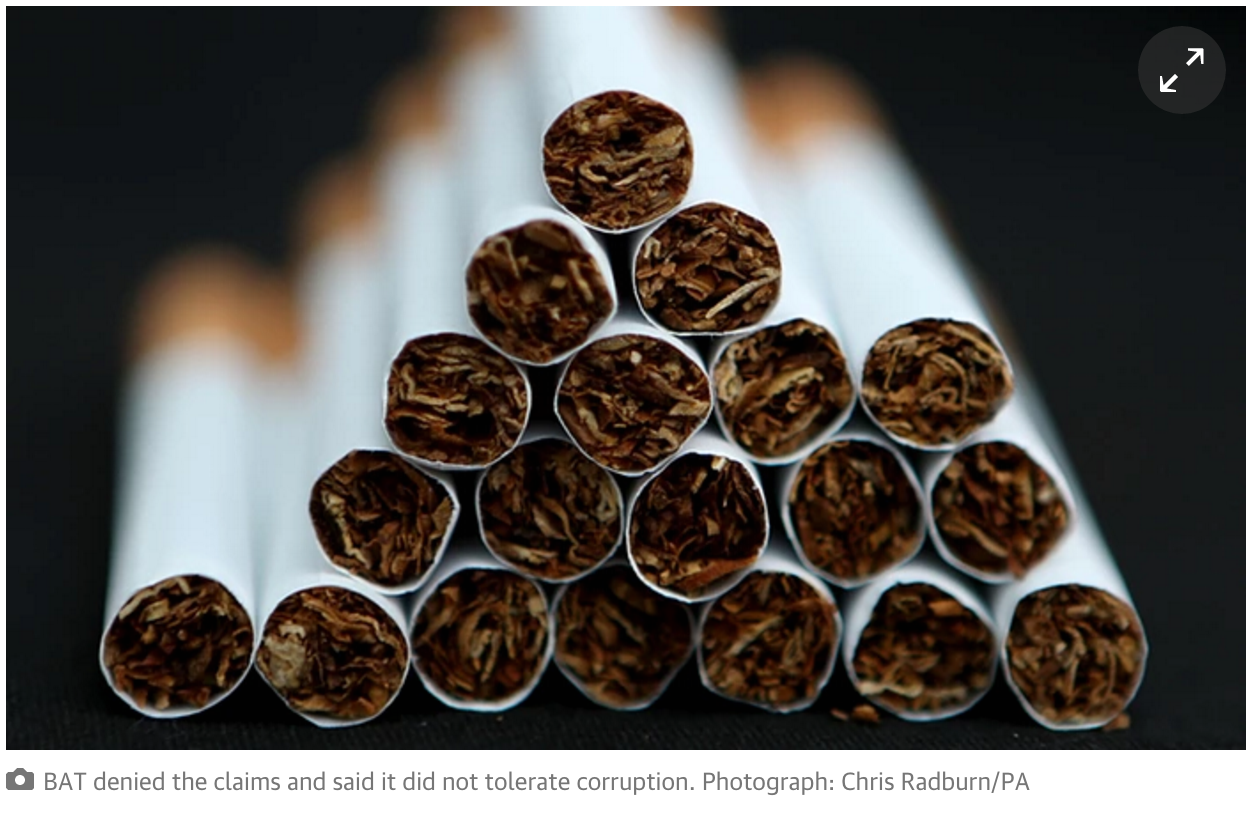 British American Tobacco paid bribes to government officials in a bid to undermine the UN’s global anti-smoking treaty, an investigation by the BBC has alleged.

One of them, Godefroid Kamwenubusa, an official at Burundi’s Ministry of Health, was paid $3,000 (£2,000) for supporting BAT during negotiations on the convention in 2013 concerning illicit tobacco products. Julie Adell-Owino, a BAT lobbyist who arranged the bribes, wrote in an email that the payment to the Burundian official was also for “the draft TCB” – tobacco control bill – “that the minister has”.

Panorama alleged that Kamwenubusa was being bribed to help undermine Burundi’s tobacco control bill, drafted in compliance with the framework convention. An email obtained by the programme from another contractor suggested he could “accommodate any amendments before the president signs”. Kamwenubusa later emailed a copy of the draft bill to BAT.

Kamwenubusa denied taking $3,000 from BAT and said the emails were “not official”, the BBC reported. Documents from an employment tribunal hearing, however, show that BAT itself regarded the payment as one of a series of “unlawful bribes”.

Panorama alleges that Chaibou Bedja Abdou, a representative of the framework convention on tobacco control from the Comoros, was also paid $3,000. A former representative from Rwanda, Bonaventure Nzeyimana, was paid $20,000. Both men deny taking bribes from BAT.

Dr Vera da Costa e Silva, head of the framework convention’s secretariat at the WHO, said BAT “is irresponsible to say the least”.

“It is using bribery to profit at the cost of people’s lives, simple as that,” she said. “BAT should be investigated by the government and should be punished accordingly.”

Panorama alleged that BAT had also bribed politicians. One of the whistleblowers who gave information to the BBC was Paul Hopkins, a former soldier with the Irish special forces who worked for BAT in Africa for 13 years and said he had paid bribes on behalf of the company. He fell out with BAT and was made redundant.

Bribery was the cost of doing business in Africa, he said he had been told. “BAT is bribing people, and I’m facilitating it,” he said. “The reality is if … they have to break the rules, they will break the rules.”

BAT categorically denied this was the way it conducted business in Africa. “We will not tolerate corruption in our business, no matter where it takes place,” the company said.

“We are disappointed that the BBC should decide to broadcast allegations made by former employees with a clear vendetta against us, whose employment was terminated in acrimonious circumstances and who present a completely false picture of the way BAT does business. We have made it clear to the BBC that their sources are unreliable and that we categorically deny the suggestion that this is how BAT operates around the world.”

However, industry critics called for an inquiry. “Given how Big Tobacco operates, these latest revelations are likely to be just the tip of the iceberg,” said Prof Anna Gilmore of the tobacco control research group at the University of Bath, which assisted the BBC in making the documentary. “That’s why there must be a full and public inquiry to expose the extent and nature of BAT’s illegal acts. No company should be allowed to put its profits before the health and economic wellbeing of sovereign nation states.”

The framework convention on tobacco control urges all governments to enact laws to restrict the marketing and availability of tobacco. It came into force in 2005 with the ambition of saving 200 million lives by 2050 if fully implemented. There have been delays to implementation among the 44 countries of the WHO’s African region.

Cancer Research UK called for an urgent inquiry into whether criminal offences have been committed under the Bribery Act 2010. Harpal Kumar, the charity’s chief executive, said: “We are appalled by the allegations presented in this programme. For any company to pay for access to government and officials to influence legislation is bad enough. But if that company is doing it so that it can more easily sell deadly products, it’s outrageous.”