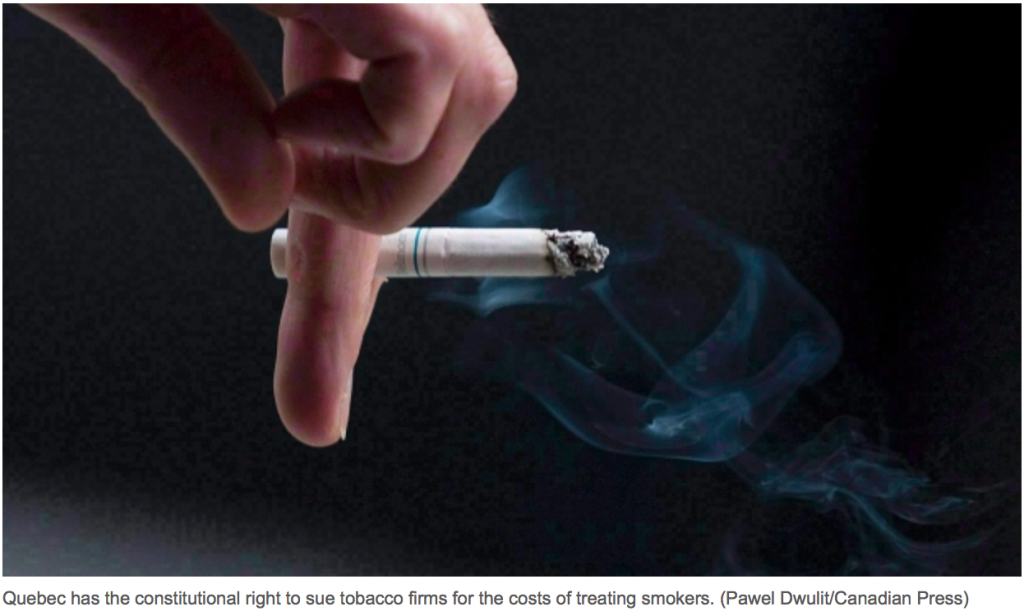 Court upholds law that makes it easier for province to sue

The Quebec government has the constitutional right to sue tobacco companies to recover health care costs, Quebec’s Court of Appeal ruled on Monday.

The judges of the Court of Appeal upheld the March 5, 2014 ruling by Robert Mongeon of the Quebec Superior Court, and dismissed the appeal from tobacco firms.

The ruling only applies to whether attempting to recover the cost of health care and damages related to tobacco is constitutional. It does not concern the lawsuit filed by Quebec in 2012 against Imperial Tobacco, JTI-Macdonald and Rothmans, Benson & Hedges.

The suit asked for more than $60 billion to reimburse the costs incurred from caring for Quebec residents with illnesses linked to tobacco products.

The law, which took effect in June 2009, lays down specific rules for the government to recover money.

The judges did not consider the arguments of the tobacco companies, who claimed they were not getting a fair trial due to the “cumulative effect” of the rules prescribed by law.

However, the law is “particularly severe” for tobacco companies and “significantly reduces” the burden of proof from the government, according to Judge Geneviève Marcotte.

Despite this, she says that it is not the role of the Appeals Court to question the choice made by the legislature.

Other Canadian provinces also have cases pending against tobacco companies for the costs of treating smokers borne by health systems.