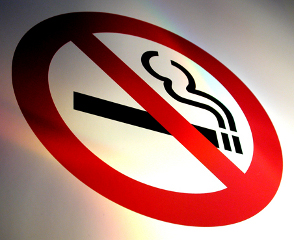 Take a deep breath and imagine (or if you’re old enough – remember) what the air quality would be like in an airplane when everyone in the back was smoking. It was just 25 years ago that legislation was passed banning smoking on all domestic flights in the US.

In 1986, the US Surgeon General named secondhand smoke a serious health risk. That same year, the National Academy of Sciences called for a smoking ban on all domestic flights, citing research that showed flight attendants were exposed to smoke levels similar to those of a person living with a pack-a-day smoker.

In the 1980’s, national health organizations including the American Cancer Society joined the Association of Flight Attendants in a campaign to end smoking in airplanes. In 1988, President Ronald Reagan signed a federal law sponsored by then Representative, now Senator Richard Durbin (D-IL) and the late Senator Frank Lautenberg (D-NJ), prohibiting smoking on domestic flights of less than 2 hours. Congress strengthened the law in 1989, extending it to domestic flights of 6 hours, which covered nearly every flight route in the country. The law became permanent 25 years ago on Feb. 25, 1990 when it was signed by President George H.W. Bush.

Each year, an estimated 7,000 non-smoking adults die of lung cancer as a result of breathing secondhand smoke. There is also some evidence suggesting it might be linked to lymphoma, leukemia, and brain tumors in children, and cancers of the larynx (voice box), pharynx (throat), nasal sinuses, brain, bladder, rectum, stomach, and breast in adults.

Laws that ban smoking in public places have helped to reduce this danger. The American Cancer Society Cancer Action Network (ACS CAN), the nonprofit, nonpartisan advocacy affiliate of the American Cancer Society, is working to expand and strengthen these laws to further protect both smokers and non-smokers from the dangers of secondhand smoke. The workplace is a major source of secondhand smoke for many adults.

“Just as many Americans alive today could never imagine lit cigarettes on a plane, we should make it a national priority to remove secondhand smoke from public places, so children never know what it’s like to eat in a restaurant clouded in cigarette smoke and bartenders and servers can spend their shifts breathing only clean air, regardless of where they work and live. Our progress cannot stall – all workers in America deserve to breathe smoke-free air just as flight attendants do today,” said Seffrin.