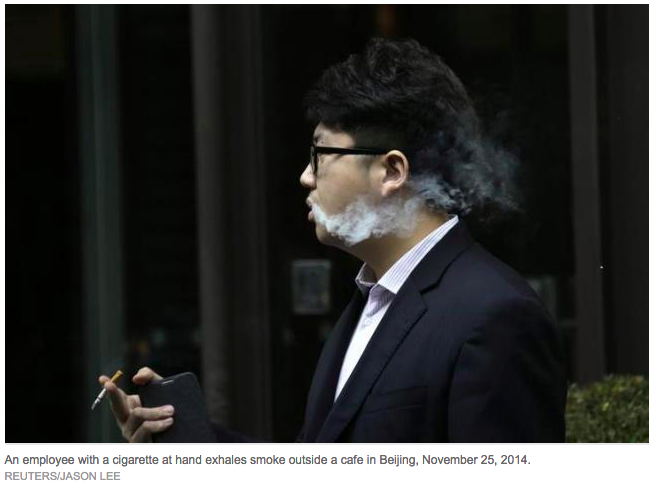 China is set to raise the wholesale tax rate for cigarettes to 11 percent from 5 percent, the Ministry of Finance said on Friday, in a move to deter smokers in the world’s biggest maker and consumer of tobacco.

China has accelerated a campaign against smoking over the past year, despite persistent opposition from the tobacco industry. Domestic and foreign anti-smoking activists say China’s cigarette habit has come at a heavy cost to the healthcare system.

Cigarette wholesalers must also pay an additional 0.005 yuan (less than one cent) per cigarette sold, a statement said, adding that the increase would come into effect on Sunday.

Gan Quan, director of the China office for the non-profit International Union Against Tuberculosis and Lung Disease, told Reuters the development was welcome but didn’t go far enough.

“It’s good news because raising the tax will result in higher prices, and that will help keep young people from smoking,” he said. “At the same time, in terms of the extent of the tax hike, it’s still a long way from other countries that have done very well in curbing smoking.”

China is home to 300 million smokers and 740 million more who are exposed to second-hand smoke, state media has reported.

The State Council, China’s cabinet, has issued a draft regulation to ban indoor smoking, limit outdoor smoking and end tobacco ads. Many cities have already banned smoking in public places, but critics say those curbs are enforced unevenly, or not at all.

The World Health Organization praised the tax hike, but added that the additional cost had to be passed to consumers for the measure to be effective.

“Increasing tobacco taxes and prices is the single most effective way of reducing tobacco consumption in the short term,” said Bernhard Schwartlnder, the WHO Representative in China. “The WHO is therefore very pleased to see tobacco taxes increased in China, but it is crucial that the increase be passed on to retail prices.”

The campaign against smoking has picked up steam over the past several months, but the leadership and anti-smoking campaigners have faced tough opposition from the state-owned tobacco monopoly, which wields great sway because it contributes an estimated 7-10 percent of government tax revenue.