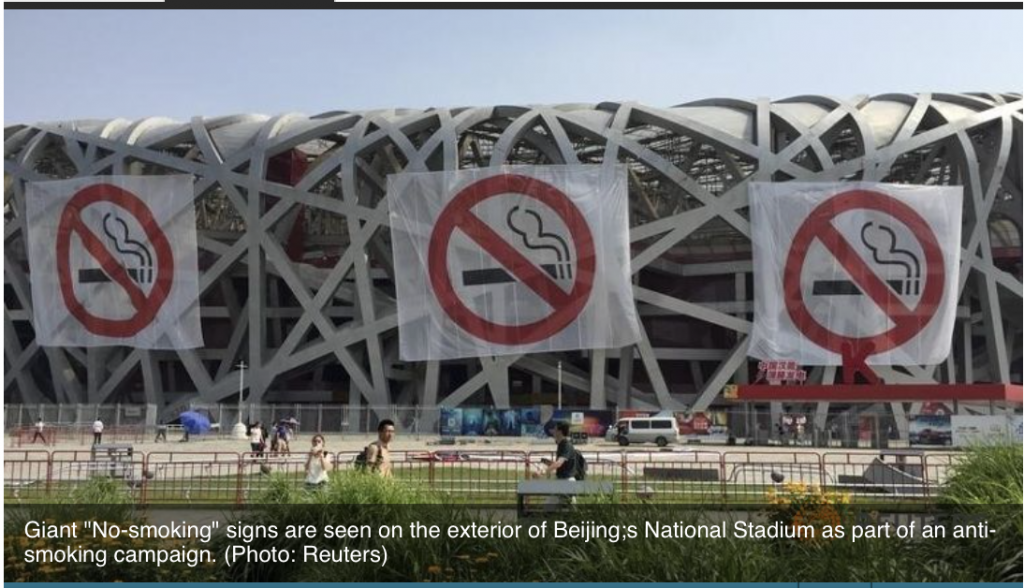 BEIJING: A recent survey by the Chinese Centre for Disease Control and Prevention has shown that there is very strong public support for making more public places smoke-free across the country.

The survey covered 14 cities and more than 30,000 respondents across China, including Beijing, Hangzhou, Harbin and Tianjin.

It has been almost three months since Beijing rolled out China’s toughest smoking ban.

Lighting up is now prohibited in all offices, shopping malls, restaurants, bars and airports in the capital. Many outdoor public places, such as areas outside kindergartens and hospitals, are also required to be smoke-free.

“Rates of compliance are quite high rates of smoking in restaurants, for example, has decreased quite dramatically. Smokers are much more motivated to quit smoking as a result of following the introduction of the smoke-free law,” she said.

Beijing’s move was cited by anti-smoking advocates as an example of why strong laws are needed to protect the public from second-hand smoke.

The China City Adult Tobacco Survey showed that rates of exposure to second-hand smoke were lower in cities with smoke-free regulations when compared to those without regulations.

“Places without strong laws have not done well. Second-hand smoke exposure will be lessened with laws and investment,” said Dr Liang Xiaofeng, Deputy Director of the Chinese Centre for Disease Control and Prevention

Alhough there is currently no national smoke-free law in China, almost all respondents of the survey supported a ban on smoking in public places. Support for a smoking ban in restaurants was also very high across all the cities, with more than eight in ten respondents supporting a ban.

Going forward, anti-smoking advocates said that among other things, they hope to see a complete ban on tobacco marketing and a rise in tobacco taxes and prices. Currently, 20 cigarettes cost less than US$2.

Besides smoking bans, they also said that more needs to be done to help people quit smoking with the involvement of the family and workplace.

“There are some places with smoking cessation clinics, but not many people visit them. Others don’t even have it because there’s no demand so this is complicated. The person must want to quit, and this comes from external influences, such as from the family or from the workplace,” Dr Xiaofeng said.

China has more than 300 million smokers and more than a million people die from smoking-related illnesses every year.