The Jakarta Legislative Council’s (DPRD) plan to pass a law implementing no-smoking zones highlights ongoing efforts to protect non-smokers from the harmful effects of cigarette smoke. Under the bylaw, stores that sell cigarettes could no longer display them openly. Displaying the name or logo of any brand of cigarettes would be prohibited as well.

The council handed the draft bylaw to the city administration in a plenary meeting on March 11. In the plenary meeting, attended by Jakarta Governor Basuki “Ahok” Tjahaja Purnama, the City Council’s Legislation Body (Balegda) explained that the draft bylaw on no-smoking zones was not aimed at prohibiting people from smoking. Rather, it added, it is aimed at regulating smoking in the hope of protecting people from secondhand smoke exposure and preventing the up-take of smoking.

“Once it takes effect, stores will sell cigarettes by only displaying a sign with a message, which reads ‘Cigarettes are available here’,” Balegda said in a statement conveyed by Dwi Rio Sambodo, as quoted by tribunnews.com on Friday.

Commenting on fears of a potential decline in the city’s tax revenue and a slowdown in day-to-day economic activity, Balegda stated that based on studies, Jakarta’s locally generated revenue from taxes on cigarette ads amounted to only around Rp 14 billion (US$1.07 million) per year. This was much less, it asserted, than the administration’s spending on medical treatments for cigarette-related health problems.

To prevent negative impacts of tobacco advertising, four years ago the government issued Government Regulation (PP) No.109/2012 on tobacco control, which put tougher restrictions on tobacco advertising in all media. According to PP 109, tobacco companies can still advertise their products in outdoor spaces but need to meet some requirements. The size of each ad displayed must not exceed 72 square meters, for example. They are also not allowed to display tobacco ads on main roads. The regulation also restricted the broadcasting of smoking ads on television to between 9:30 p.m. and 5 a.m.

“Ad placement has been regulated in PP 109, thus, any regulation less strict than the PP, or that contradicts it, should be automatically rejected,” Association of Indonesian Cigarette Producers (GAPPRI) general secretary Hasan Aoni Aziz told thejakartapost.com in a recent interview.

Hasan said all legal products had the right to advertise and this was constitutionally protected. “Amid tougher advertising restrictions imposed by PP 109, there remains the right of cigarette companies, as a legal producers, to advertise and promote. So, any regulation banning tobacco manufacturers from advertising their products can be considered to have violated the Constitution,” he said.

Hasan said the Jakarta gubernatorial decrees that banned both outdoor and indoor cigarette advertising were not constitutionally valid because PP 109 allowed tobacco manufacturers to advertise their products. “These gubernatorial decrees are excessive I think, because they no longer talk about the impact of cigarette smoke but stipulate excessive preventive measures,” he said.

“There is still ample room, through creative ways, to introduce products to consumers. It’s not only the tobacco industry. Other industries would do the same way if they suffered tough advertising restrictions like what we are facing now,” said Hasan.

“The problem for us is the fact that the room we get under PP 109 to introduce our products to our consumers has been snatched away by a lower regulation than the PP. If they want to take away our space, they should first file a judicial review on the PP,” he complained. 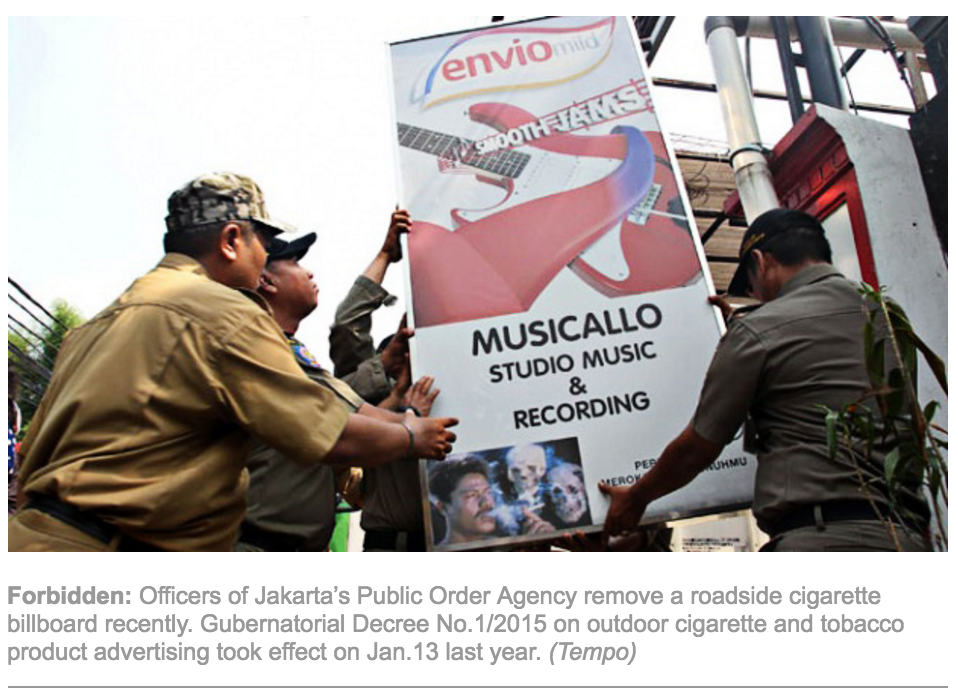 Cigarette advertising restrictions are one of the three main elements of tobacco control delivered by PP 109, the other two being the inclusion of graphic warnings on cigarette packets and the designation of smoke-free zones in public spaces. Advertising, promotion and sponsorship are blamed as the main factor responsible for the continuous increase in tobacco use in Indonesia.

According to the Global Adults Tobacco Survey (GATS, 2011), the prevalence of smoking among adults in Indonesia stands at 34.8 percent, including around 40 percent of 13- to 15-year-old adolescents.

FX Ridwan Handoyo of the Indonesian Association of Advertising Companies (PPPI) said that in carrying out its business, Indonesia’s advertising industry was governed by a code of ethics stipulated in an advertising guide called Kitab Etika Pariwara Indonesia (EPI, or the Pariwara Book of Ethics). This guide, he said, placed some restrictions on cigarette advertising, such as sponsorship at sporting events.

“One crucial thing included in the EPI is that we don’t want tobacco companies to sponsor activities or programs related with health, such as sporting events. This is because sports are for health. We hope that sponsors of any activity related to health are not tobacco companies,” he said in a recent interview.

Ridwan said that actually, PP 109 had adopted quite tough restrictions on tobacco advertising. A tobacco ad must carry health warnings, he cited as an example, and display the minimum age requirement of 18. “A tobacco ad is not allowed to show the physical appearance of a cigarette packet and is prohibited from encouraging people to smoke. A tobacco ad may also not manipulate consumers by saying, for example, that smoking is good for your health. Also, tobacco ads cannot be directed at children, adolescents or pregnant women and are not allowed to use cartoon figures.”

PP 109 also strictly regulates broadcasting hours of cigarette ads both on television and radio, he said. “I think this regulation is quite tough but its implementation is still weak. The government should have a team to monitor the implementation of cigarette advertising restrictions in PP 109,” said Ridwan.

Despite protests, Jakarta’s smoking ad ban seems to be the most concrete measure to provide protection from tobacco advertising and promotion exposure. “The previous regulation only limited outdoor cigarette advertising but now, indoor advertising is also prohibited,” the Jakarta administration’s tax agency secretary Made Suarjaya said as quoted by Tempo on Jan. 28.

Commenting on the removal of cigarette billboards from roadsides, Made said in many foreign countries, conventional billboard use had been replaced by digital advertising, which according to many studies had an even higher impact on smoking initiation among adolescents.

A sociologist from the University of Indonesia, Roby Muhamad, said that with the use of peak data on social media, companies could advertise their products with a high precision level. “With digital media, companies can campaign their products covertly. They no longer have to lavish their ads on because they are targeting individuals. They don’t have to create billboards or big ads for movie theaters. What they need is to create small ads that can enter and infiltrate the digital technology being used by people,” Roby said in a recent interview.

“Digital advertising is exceptionally beneficial to the tobacco industry because companies can campaign their products with a high precision level without fanfare,” he went on.