A white minivan pulls up outside of Sovanna, the Khmer barbecue restaurant popular with locals and foreigners in the well-to-do neighbourhood of Tonle Bassac. Eight polished young women, dressed in identical cocktail dresses, get out and walk into the dining floor to sell cigarettes. They approach the tables of the mostly male diners in groups of two or three, one holding a miniature spinning prize wheel. 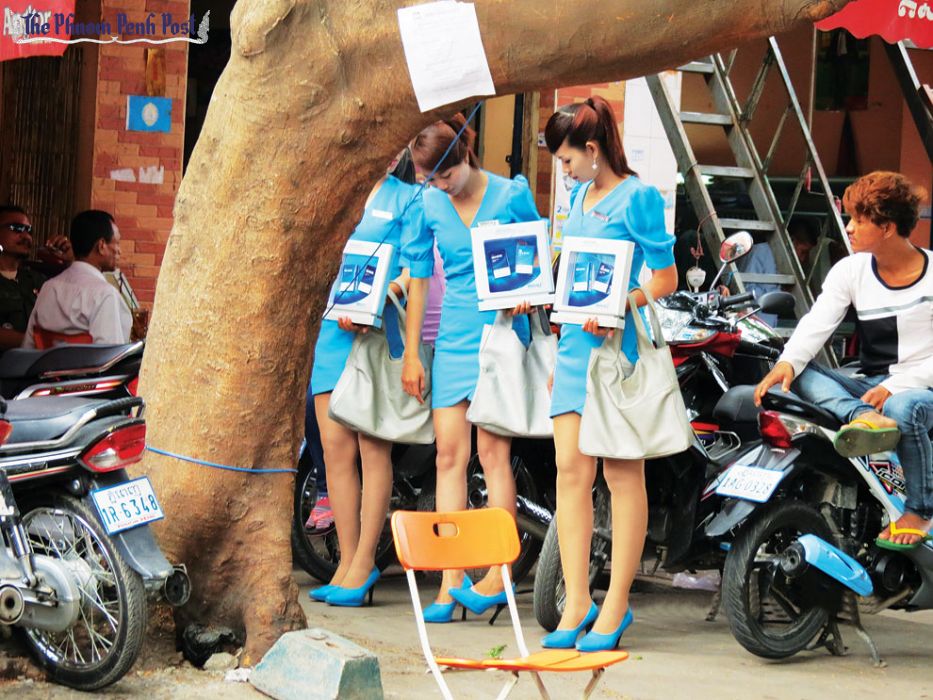 They are selling the brand 555, a higher-end label in Cambodia; one packet costs 6,000 riel, but spin the wheel and you can win a drink voucher or another packet for free. Luck doesn’t seem to have much to do with it – most transactions yield more drink or smokes.

Twenty three-year-old Sreymich* is on a monthly contract and says she works two eight-hour daytime or evening shifts a week. Other than the blue of her dress, nothing on her uniform or the nondescript vehicle that ferries her team around to the city’s busiest restaurants indicates she represents a brand. But some involved with the Kingdom’s anti-smoking campaign say the employment of promotional ‘cigarette girls’ is a way for tobacco companies to evade anti-advertising enforcement and violates laws.

Some progress has been made in tackling what a WHO report issued in 2011 noted as an “alarming trend in Cambodian media where promotion of tobacco exceeds public education about tobacco harm”. This year, the same organisation awarded Phnom Penh a special award for its commitment to tobacco control, in particular for showing resistance to pressure from cigarette companies to sponsor outdoor events.

But while much has been achieved on the advertising front, promotion has reared its head in more “insidious” ways, wrote Dr Pieter JM Van Maaren, the World Health Organization’s Representative in Cambodia, in a letter to the Post last May to mark World No Tobacco Day 2013.

One of those ways, according to Mr Mom Kong, executive director of Cambodia Movement for Health, an anti-smoking NGO that works with government agencies on tobacco control, is cigarette girls.

“They [can no longer] promote through billboards and other means, [so] they spend their advertising budget on promotion girls,” says Dr Kong.

Dr Yel Daravuth, from the WHO’s Tobacco Free Initiative, says that if such a promotion was offered it was “a very clear violation of law”.

British American Tobacco, which owns 555 and is the biggest tobacco firm in Cambodia, says the girls are not promotional staff, but “sales personnel” who sell BAT brands as part of their normal sales operation.

“There is no promotional aspect to this sales operation as no product is given away for free or at a discount, or sold using any free gifts or [promotional] offers,” a spokesman said, refusing to comment on the activities of 555 sellers or if they are organised by an agency or the company itself.

Sreymich, who is from Preah Sihanouk province and came to Phnom Penh seven years ago to study make-up, says she works for an agency and also sells a different company’s brand, earning $20 a day. It’s not ideal work for her, she says, and she supplements it with another job as a phone card saleswoman.

“I don’t really love my job, [but I studied] only up to primary school, so I need to share [the workload] with my siblings to find money to support my family”. 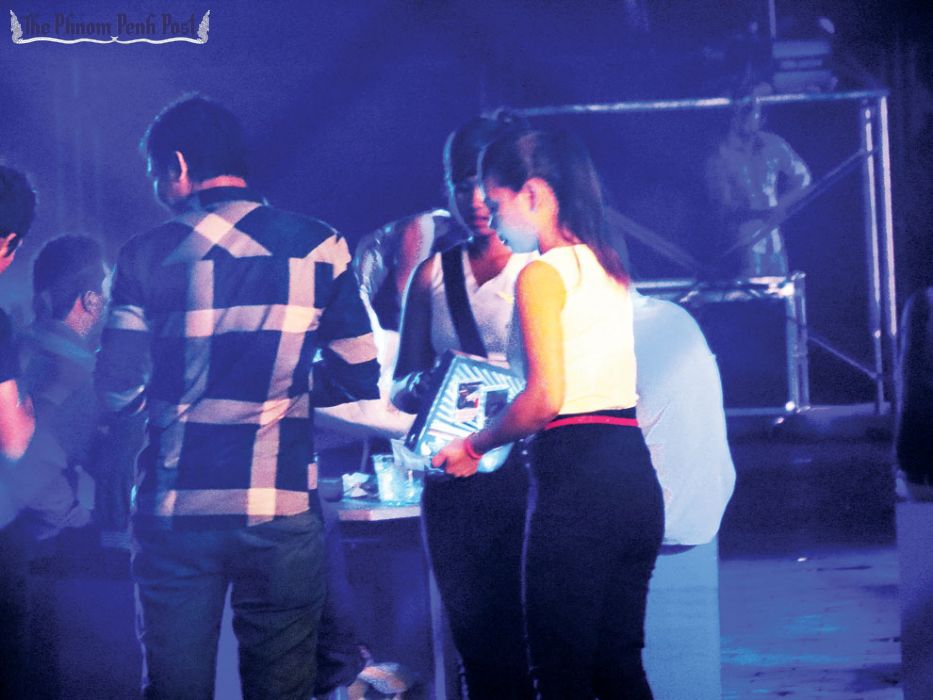 It’s not easy work. A few weeks into selling the cigarettes she says her team was scolded by a restaurant owner for being there, though the company had already checked with the restaurant before they arrived. Another time a restaurant owner’s wife verbally abused them for their appearance.

“The old men never touch me but they say [flirtatious] words to me and my team because we are promotion girls.”

Sar Mora, president of the Cambodian Food and Service Workers’ Federation (CFSWF), the union that represents beer promotion girls, says there are no cigarette sellers in the CFSWF and that the union had little information about their working conditions, but that working at night among drunk patrons could raise similar workplace issues.

“Working as a promoter – they all have the same rights as all ordinary [service industry] people. As the union we value this job [as] it can help them to make an income . . . [But] because they are selling in the restaurant and some customers are drunk, I feel it’s similar to beer promotion so we want [the workplace] to value them and also to respect their rights.”

Ironically, it would probably not be appealing for the cigarette girls to walk around smoking the cigarettes themselves, admits Sreymich. More than 42 per cent of Cambodian men smoke but just 3.5 per cent of women.

Cambodian smokers go through an average of 15 cigarettes a day – the highest in any ASEAN country, according to the ASEAN Tobacco Control Atlas published in August this year. In 2010, 10,000 Cambodians died from tobacco-related illness, says the WHO in a 2011 report with the Ministry of Planning.

Since the government’s 2011 sub-decree banned the promotion of tobacco products through TV or radio advertisements, billboards and public events, Phnom Penh’s advertising landscape has gone through a noticeable change, says Dr Kong. While cigarettes were visibly banished from outdoor advertising in many Western countries in the early 2000s, Phnom Penh still had a plethora of enticing billboards and prominent logos displayed. Now advertising is limited to A4-sized signs or posters at point-of-sale locations like shops and supermarkets and can’t include any slogans or “key messages” Dr Kong says.

“There’s no billboards left. Before the sub-decree came into force there were thousands in Phnom Penh and the provinces . . . they featured Western women, very stylish and independent.”

Through the sub-decree, companies who violate the ban are first sent a warning letter, then can have posters, cards and promotional equipment confiscated, followed by a temporary closure of business. The final punishment is a permanent closure of business. In January, the Minister of Health signed off on warning letters to 12 companies, representing more than 30 brands, who were found violating the sub-decree.

Dr Kong isn’t sure of the exact number of cigarette brands in the Kingdom, but the complexities of ownership and importing can make it hard to gauge. While large companies like BAT own brands like ARA and 555, other traders such as Indobest distribute and import other brands such as Mild Seven and Winston for other tobacco brands.

Khun Sokrin, director of the National Health Promotion, the Ministry of Health’s tobacco control arm, says he wasn’t aware of the exact activities of the cigarette girls and refused to comment on whether the 555 game constituted a promotion or not.

“Whatever is advertisement or sponsorship where we know it, we do surveys to monitor compliance to the sub-decree,” he said. Enforcement comes down to government agencies, including the City Hall.

Dr Kong thinks it is more difficult for agencies to monitor the restaurant sellers because they elude enforcement or even proper monitoring by not staying long at venues and not displaying their brand in an obvious way.

“In my opinion I think that cigarette girls are not very easy to catch.”

Cigarette girls – or ‘person to person sale’ – are employed in Indonesia, Malaysia, the Philippines, Thailand and Vietnam, according to the Southeast Asia Tobacco Control Alliance (SEATCA).

Excluding Laos, Cambodia has the most affordable cigarettes in the region. ARA, the most popular local brand, costs on average 58 cents, while mini packets of cigarettes – SEATCA calls them “kiddie packs” – are said to target young people and women.

While Cambodia may have stricter advertising bans than some of its neighbouring countries, the Kingdom lags behind in health warnings. The next year will see six other countries, including Vietnam and Indonesia, implement the graphic pictorial health warnings on cigarette packs. But this will one day happen in Cambodia, Dr Kong believes. He cites Australia’s lead, a country which now has all cigarette products packaged a plain olive green colour and all logos removed at point-of-sale.

“We’re really inspired by their plain packaging. [Their] health minister is our heroine,” he says.

Sokrin is happy with the progress of the Kingdom’s tobacco control movement since the implementation of the sub-decree, which followed Cambodia’s ratification of the WHO Framework Convention on Tobacco Control, in 2005. Eight hundred workplaces are now smoke-free, he says, even though the number of tobacco consumers has not decreased in Cambodia.

For many in public health, the 2005 WHO ratification was to make way for more a wide-ranging law that would reduce Cambodia’s growing smoking habit.

Dr Daravuth says that a more comprehensive law has been in the works for a long time – when it will come into being, though, he “cannot predict”.

“We break [the legislation] down one by one,” reasons Dr Kong, who says the next stage for Cambodia will be banning smoking in public. Is this a big jump, given Cambodia doesn’t even impose fines for lighting up in smoke-free venues?

“It will happen,” he says with confidence.

At the restaurant where Sreymich and her team have made their quick rounds to the tables, a smoking ban doesn’t seem inconceivable – it’s already happened in bars and pubs in Thailand.

Back to Sovanna, and after less than 30 minutes the young women re-group and totter off to the white van, disappearing into the night.

Phnom Penh Municipality could not be reached for comment on enforcement.

*Names have been changed to protect identity.