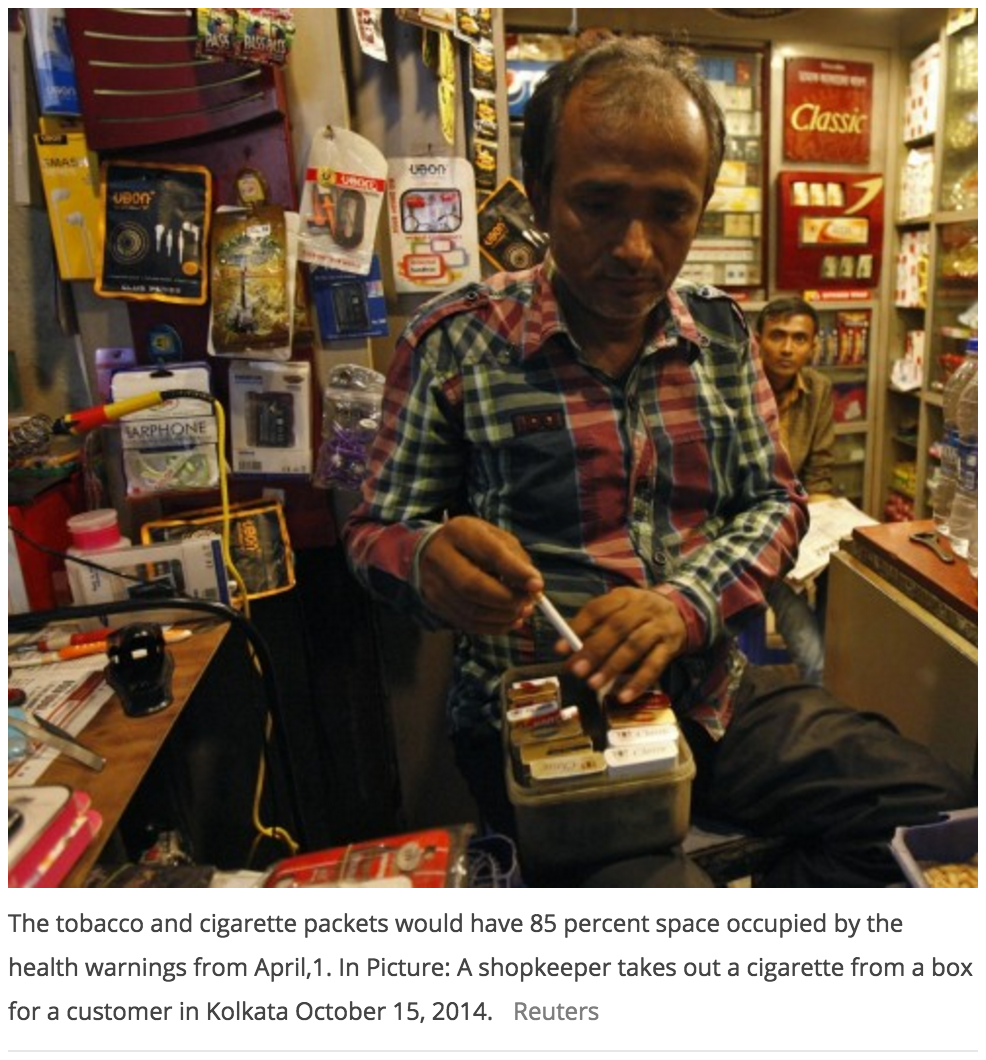 Cigarette and tobacco packs will have 85 percent space occupied by health warnings on both sides from April 1. The government has decided to go ahead with its decision on increasing the size of the health warnings on the packaging from the current 40 percent, despite strong opposition from the tobacco industry and a parliamentary panel.

“There should be no dilution of the commitments India has made. India’s public health community has spoken strongly against what was contended as weak evidence linking tobacco and cancer,” Monika Arora, director of Public Health Foundation of India and a member of the Health Ministry’s Technical and Expert Committees on tobacco, was quoted as saying by the Hindu.

The Union Health Ministry had issued a notification, Oct.15, 2014 directing tobacco companies to display health warnings, which occupy 85 percent of the size of the tobacco packs. It said the new rules will come into effect April 1, 2016.

The World Health Organisation (WHO) has supported the Indian government on its decision on displaying larger health warnings. The WHO called the current debate on the health warnings in India as worrisome.

The tobacco industry of India, represented by the Tobacco Institute of India (TII), is up in arms against the government decision. The TII has, in fact, found an unusual support from a government-appointed parliamentary panel, which said implementing large pictorial warnings on tobacco packs will be too harsh for tobacco farmers.

The Global Adult Tobacco Survey 2009-2010, undertaken by the Union Health Ministry, said one million tobacco-related deaths take place in India every year. The survey said consumers who smoke bidi and chew tobacco outnumber cigarette smokers in the country. In 2011, the total health expenditure burden from all diseases due to tobacco use amounted to more than Rs.1,00,000 crore, which is 12 percent more than the combined state and central government expenditure on health in 2011-12.

The Central government has reportedly proposed amendments in the anti-smoking law in order to enforce a complete ban on tobacco advertising, which it says will be in line with the WHO guidelines.