Cigarette prices will face the highest increases under the new excise tax law that took effect on Saturday, with tax rates now at 20% and 40%, followed by imported wine.

The tobacco tax in terms of volume has been increased to 1.20 baht per cigarette from 1.10 baht, while an additional levy based on value consists of two rates — 20% of the suggested retail price for cigarettes that were priced below 60 baht per pack and 40% for those priced above 60 baht.

Previously, low-priced cigarettes, most of them local brands made by the Thailand Tobacco Monopoly, were subject only to the tax rate based on volume.

The changes will add 4-15 baht a pack to the price of cigarettes previously costing 60 baht a pack or less. Higher-priced brands will increase by 2-14 baht a pack.

But two years from now, both types of cigarettes will be subject to the same tax rate of 40%, said Somchai Poonsawat, director-general of the Excise Department. 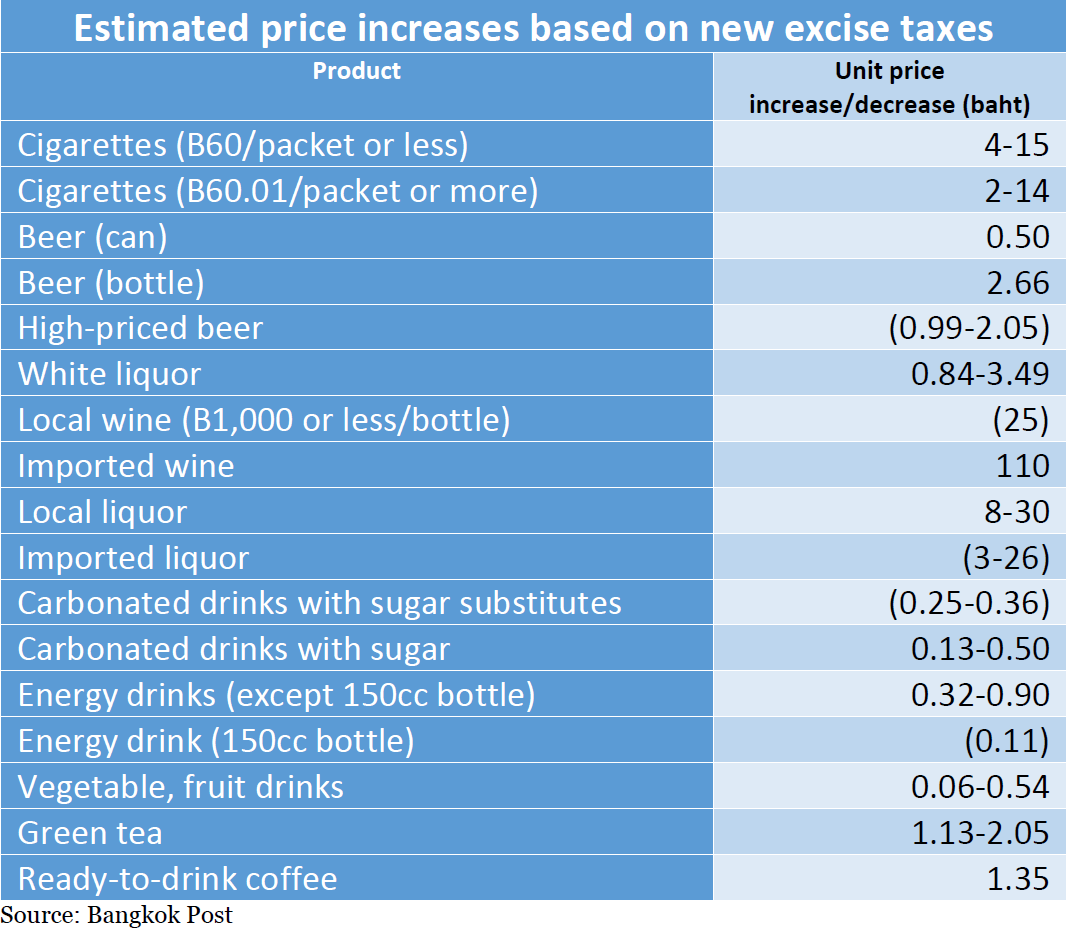 For alcoholic beverages, beer will cost 0.50 baht more per can or 2.66 baht more per bottle, while high-priced brands will be between 0.99 and 2.05 baht cheaper.

Imported wines priced at 1,000 baht or more per bottle will now cost 110 baht more. However, wine priced at less than 1,000 baht a bottle, most of it local, will be 25 baht cheaper.

Carbonated drinks, such as those with sugar substitutes such as Coke Zero or Pepsi Max will be 0.25 to 0.36 baht cheaper while those using regular sugar will cost 0.13 to 0.50 baht more.

Drinks containing sugar substitutes not above the limit set by the Food and Drug Administration and those using stevia are not taxed, said Mr Somchai.

The new excise tax structure is expected to increase excise tax revenue by 2%, or 12 billion baht, he said.

“We believe operators will not raise retail prices to the extent that it would become a burden on consumers,” he said.

The law introduces a new calculation method for excise taxes, including those on sugary drinks, tea and coffee. Taxes are calculated based on suggested retail prices and on volumes.

Authorities have reasoned the tax increases will help to promote good health. As well, the legal changes reflect reforms aimed at minimising the use of discretion by tax officials and therefore reducing bribery and corruption.

In addition to excise tax, alcoholic-beverage and tobacco producers are required to pay “earmarked taxes” to three agencies set up for social benefits to finance their operations — the equivalent of 2% of all sin tax collections to the Thai Health Promotion Foundation, 1.5% to the state-owned TV operator Thai PBS and 2% to the National Sports Development Fund. However, the latter two may receive up to 2 billion baht each year, with any excess collected from tobacco and drinks makers going to state coffers.

The cabinet also recently approved the yet-to-be-set-up Elderly Fund as another beneficiary of earmarked taxes, at 2% of sin tax collections but not more than 4 billion baht a year.

The impact of the tobacco tax changes is already being seen along the Thailand-Malaysian border.

In Songkhla, the gap between the prices of local and imported cigarettes sold along the border widened to 65-70 baht a pack on Saturday after the new law took effect.

Some small shops and groceries were still selling cigarettes at the old prices, while other raised prices by three baht a pack to 90 baht a few days ahead of the effective date but saw their sales plummet.

Vendors said many customers had turned to smuggled sigarettes as teh prices were only 25-65 baht per pack.

Some smuggled alcoholic beverages were also half the prices of local products, they said.