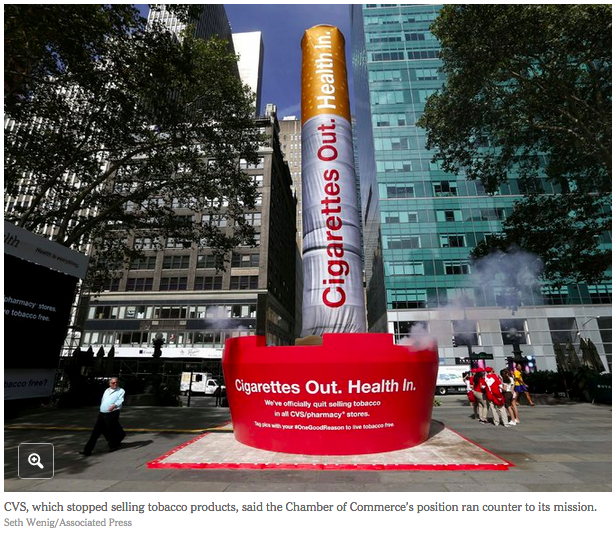 The CVS Health Corporation said on Tuesday that it would resign from theU.S. Chamber of Commerce after revelations that the chamber and its foreign affiliates were undertaking a global lobbying campaign against antismoking laws.

We were surprised to read recent press reports concerning the U.S. Chamber of Commerces position on tobacco products outside the United States, David R. Palombi, a senior vice president at the company, said in a statement. CVS Healths purpose is to help people on their path to better health, and we fundamentally believe tobacco use is in direct conflict with this purpose.

The New York Times reported last week that the chamber and its vast network of foreign affiliates had targeted restrictions, often in developing countries, on smoking in public spaces, bans on menthol and slim cigarettes, advertising restrictions, excise tax increases, plain packaging and graphic warning labels. The chambers efforts have put it in direct opposition to the World Health Organizations efforts to curb tobacco usearound the world. Thomas J. Donohue, the head of the chamber, has been personally involved in the campaign.

See the letters the U.S. Chamber of Commerce sent to governments all over the world in an effort to dismantle antismoking laws. 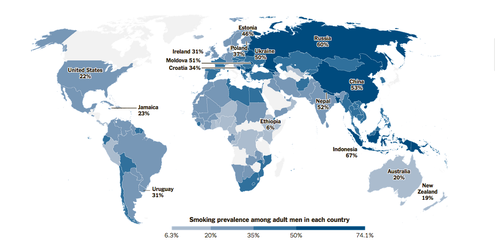 The campaign runs counter to efforts by some of the chambers members. Four health care companies that serve on its board Anthem, the Health Care Service Corporation, the Steward Health Care System of Boston and the Indiana University Health system all support antismoking programs.

The chamber has defended its efforts around the globe, saying it is safeguarding its members business interests.

Its unfortunate that a concerted misinformation campaign about the U.S. Chambers position on smoking has resulted in a company leaving our organization, the chamber said in a statement.

To be clear, the chamber does not support smoking and wants people to quit, the statement said. At the same time, we support protecting the intellectual property and trademarks of all legal products in all industries and oppose singling out certain industries for discriminatory treatment.

The chamber has not said why it has opposed public health steps like restricting smoking in public places, which it called an extreme measure when it was proposed in Moldova.

The decision by CVS was the latest criticism to hit the chamber over its tobacco lobbying.

Last week, seven Senate Democrats, including Richard Blumenthal, Al Franken and Elizabeth Warren, called the chambers tobacco lobbying craven and unconscionable, adding that member companies should be concerned that their good name is sullied in efforts to strike down public health protections worldwide.

Richard Branson, the billionaire British entrepreneur, said on Twitter that the chamber was on the wrong side of history. And on Tuesday, the head of the W.H.O. weighed in, assailing the chamber over its lobbying practices.

By lobbying against well-established, widely accepted and evidence-based tobacco control public health policies, the U.S. Chamber of Commerce undermines its own credibility on other issues, Dr. Margaret Chan, the director general of the W.H.O., said in a statement on Tuesday. So long as tobacco companies continue to be influential members of the chamber, legitimate businesses will be tarred with the same brush.

For CVS, which has 7,800 locations nationwide, the move is the latest step in rebranding itself as a health care destination, rather than a convenience store with a pharmacy. The company now operates nearly 1,000 walk-in clinics staffed by nurse practitioners.

Its executives have said that selling cigarettes is not consistent with its new strategy. The company has begun offering smoke cessation programs and recently helped conduct a smoke cessation study involving its employees and their relatives and friends.

We believe the chamber has advocated for many important causes over the years, and we thank them for their leadership on these issues, Mr. Palombi said. Given the leadership position we took last year in removing tobacco products from our stores, however, we have decided to withdraw our membership in the chamber.

The chamber is the nations largest trade group, claiming more than three million members and including technology giants like Google and Microsoft. Companies such as Pfizer, Xerox and Ace Hardware serve on the board.

Under the leadership of Mr. Donohue, the chambers strategy has become increasingly controversial in recent years. Apple resigned in 2009 over the chambers opposition to global warming regulation, and in 2013 the American arm of the Swedish construction company Skanska resigned over the what it called a chemical industry-led initiative to lobby against green building codes.

In a statement Tuesday morning, before the CVS decision was made public, Anthem said it was dedicated to helping people quit smoking and has led the charge to end tobacco use.

Greg Thompson, a spokesman for the Health Care Service Corporation, said in a statement last week: We are convinced that ending smoking may help people live longer, enjoy a better quality of life and reduce costs in our health care system.

This is a point of view we have advocated for decades and made clear to organizations that we support.

The chief executive of the Steward Health Care System, Dr. Ralph de la Torre, serves on the board of the chamber. In a statement last week, Brooke Thurston, a spokeswoman for Steward, said: If the chamber is in fact advocating for increased smoking, we do not agree with them on this public health issue.

The Indiana University Health system did not respond to requests for comment.