Graphic health warnings are effective in prompting smokers who buy on per-stick basis to think about the dangers of smoking, which in turn, is associated with increased intention to quit smoking.

This is among the findings of a study conducted by research students of the University of the Philippines in Diliman.

The researchers surveyed 402 Quezon City smokers and conducted two focus group discussions from October to November 2016 to find out how the graphic health warnings on cigarette packs had affected smoking behavior of Filipinos, given the fact that buying tingi, or on a per-stick basis, is prevalent in the Philippines.

The results suggest that thinking about the dangers of smoking is the strongest factor correlated with the intention to change cigarette consumption, especially among tingi buyers. 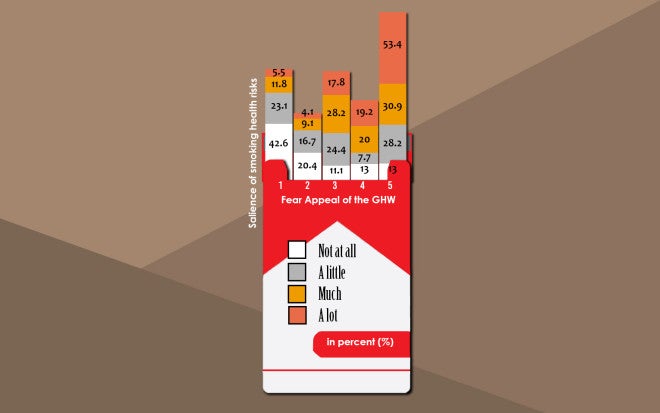 One explanation suggests that the warnings prompt the smokers to think that they could contract the diseases depicted in the pictures.

The case is different for smokers who buy cigarettes by pack.

Among pack buyers, the results suggest that correct knowledge of smoking-related diseases is the strongest factor correlated with the intention to quit smoking.

In other words, the more knowledgeable they are about smoking-related diseases, the more likely they are to quit smoking.

Graphic health warnings only ranked as the second to television as most cited source of information about the dangers of smoking.

A big majority of both per-stick and pack buyers – 94.8 percent – had seen the graphic warnings on cigarette packs. But some of them said they did not really pay attention to the pictures and just threw away the packs.

Some respondents said that they were scared and disgusted by the pictures to the point that they would prefer throwing the packs away rather than looking at them. 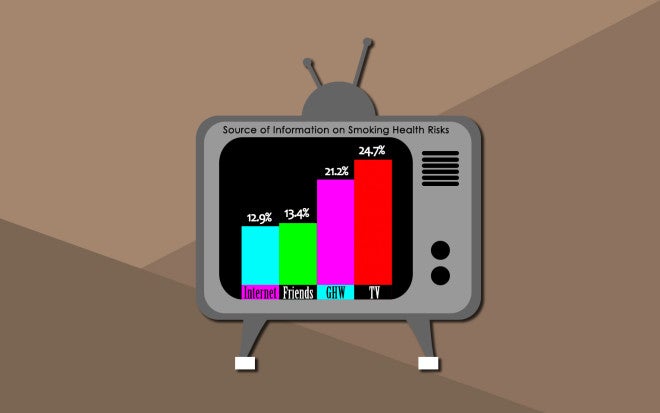 However, statistical analysis from the study suggests that newspapers and the internet were the biggest contributors to knowledge of dangers of smoking among pack-buyers. Even if the smokers watched programs about smoking on television more often, they got more information from the things they had read on newspapers and saw on the internet.

So those who read about smoking-related health risks from media, such as newspapers and the internet, are expected to remember more information.

Since being implemented last March 2016, the Graphic Health Warning Law (Republic Act 10643) has made its greatest contribution to Quezon City smokers by raising their awareness about and making them fear smoking-related health risks, a finding supported by the UP Diliman communication research study.

The law requires cigarette manufacturers to print graphic health warnings featuring depictions of the many health risks of tobacco use, such as cancer, stroke and heart disease, among many others, on 50 percent of the front and back panels of cigarette packs. 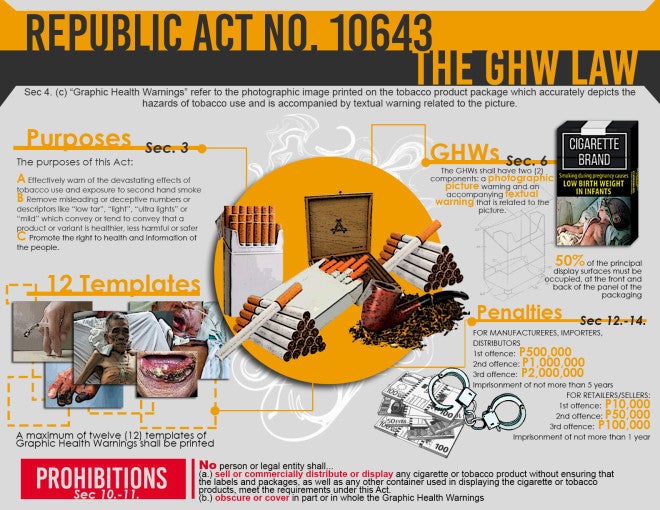 These graphic warnings are expected to instill fear of the dangers of cigarette smoking to discourage smokers them from continuing their habit.

Printing of graphic health warnings on cigarette packs was one of the non-price measures suggested to lessen cigarette consumption around the world, based on the World Health Organization Framework Convention on Tobacco Control (WHO FCTC), in which the Philippines is a signatory.

According to the Canadian Cancer Society 2016 International Status Report about cigarette package health warnings, at least 105 countries and jurisdictions have already implemented laws that mandate the inclusion of pictorial warnings on cigarette packs.

Four Asean countries – Thailand, Brunei, Laos, and Vietnam – are those that implemented laws requiring the largest pictorial warnings on packs.

For the Philippines, the implementation of the law is aimed at reducing the number of Filipino smokers. According to the 2009 Global Adult Tobacco Survey, 28 percent of Filipino adults – or 17.3 million smokers nationwide – are smokers. Even the youth are part of the smoking population, with almost one in four Filipino children aged 13 to 15 years old engaged in smoking.

Given this large smoking population, the high incidence of smoking-related diseases in the country is no surprise.

In 2009, the WHO reported that smoking-related diseases were responsible for 87,600 deaths in the Philippines every year.

Governments losses in health care expenses and productivity costs related to smoking reached P461 billion in 2006, according to a study conducted by WHO with the Department of Health (DOH), the University of the Philippines-Manila, Tobacco Free Initiative, and the Philippine College of Medical Researchers Foundation.

The UP Diliman communication research study was able to draw some characteristics of smokers in Quezon City.

On average, smoking for them has become a lifelong habit, starting at the age 19. Some started smoking as young as five years old.

(“They started with a puff now and then. Then they got hooked.”)

The majority of respondents – 51.7 percent – said they had been influenced to start smoking. Surprisingly, for most of them – or 52.5 percent – did not live with another smoker in their immediate household. They are the sole smoker in their homes. The most cited influence were their peers, with 60.5 percent of them following the lead of their classmates and 19.8 percent following co-workers. 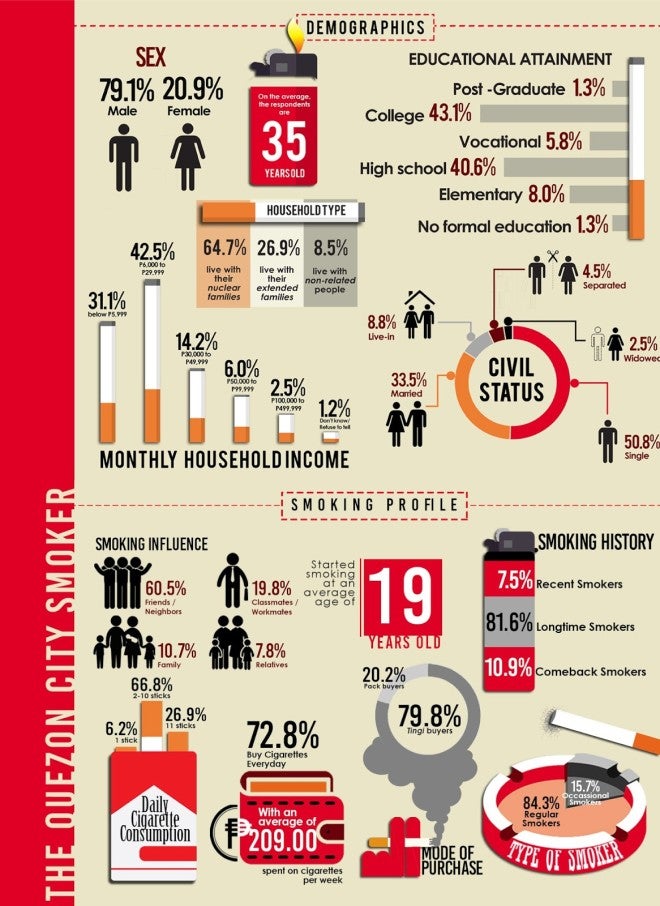 What’s the outlook for lifetime smokers?

About eight out of 10 – or 84.3 percent, to be exact – ended up as regular smokers. Most of them – or 81.6 percent – saying that they had been smoking for a long time. This suggests that smoking for them isn’t just a phase but a vice that could last a lifetime. In fact, on the average, smokers in Quezon City have been smoking for 16 years.

Their habit comes with a price: Years of medical research have proven that smoking directly causes many illnesses, many of them fatal. According to the WHO, four out of 10 Filipinos die every hour from smoking-related illnesses.

Financially, smoking can be a burden too.

There are more smokers in Quezon City – 79.6 percent – who buy per stick buyers than those who buy per pack – or only 20.2 percent. And yet, the cost of cigarettes still makes a big dent in a per-stick smoker’s budget.

On average, a smoker would spend around P209 weekly, or P836 monthly. If a smoker belongs to a family that earns P6,000 monthly and the smoker spends P836 on cigarettes alone, that’s 14 percent of the monthly family income gone up in smoke.

Most smokers may buy only per-stick. But they buy frequently, which is why they still end up spending more. According to the study, a lot of smokers – or 72.8 percent – admitted visiting sari-sari stores every day, and 66.7 percent of them would to buy two to 10 cigarette sticks. So, although a single stick only costs P3, the frequent purchases add up.

Scaring smokers is not enough

Generally, graphic health warnings have proven to be effective.

Data from the study showed that the warnings played a big role in the changing the smoking behavior of the respondents.

But despite these finding, graphic health warnings lag behind other media as a primary source of information about smoking.

More could be done: Perhaps increasing the knowledge of smokers on smoking-related diseases through other channels may be a better way to influence them to quit smoking.

The study results showed that television remained the top media that 73.1 percent of the respondents relied on to learn about smoking-related diseases. This suggests that the government could boost its anti-smoking campaign by using television as the main medium in informing the public, especially smokers, about the hazards of smoking.

This might help provide the push for many smokers to start changing their smoking behavior. Data showed that many are already starting to consider such actions.

In fact, among respondents who had not changed their smoking, 69.4 percent said they intended to change their behavior in the near future. Of this number, 75.3 percent said they could probably cut down on the number of sticks they smoke within a month.

This suggests that many smokers have already starting to think about the effects of their habit on and that this could be an opportunity for the government to finally stop smoking in the country once and for all.

In addition to informing them about the dangers of smoking, concerned agencies and groups should start designing communication projects that will teach smokers how to stop their smoking in order to increase their confidence in themselves that they can change.

Asked if they can change their smoking behaviors, some of the informants said:

“Di ko mapigilan. Hinahanap ng lalamunan.” (“I can’t stop it. My throat craves for it.”)

“Mangyayari yun pag matanda na kami.” (“It may happen when we grow old.”)

Studies on behavior change suggest that it may not be enought to just scare smokers. They should also be taught how to stop. Or else, they might just give up on the idea of changing.

With an empirical study showing the initial impact of graphic health warnings, the path to reduce cigarette consumption among Filipinos is on to a good start. The warnings have started scaring smokers. It’s time to start educating them properly through other channels. –ATM