Plain packaging for tobacco is on the way after legislation passed its final hurdle tonight.

“This is what will make a difference,” he said.

“When cigarette packs come out of a smoker’s pocket or are left lying around on the table where others can see, there will be nothing but a drab, ugly background colour and large, prominent, graphic pictorial warnings.”

Lotu-Iiga said no other product was so widely used that posed such a direct level of risk to users. Smoking led to between 4500 and 500o premature deaths in New Zealand each year, he said.

“This bill takes away the last means of promoting tobacco as a desirable product. It stops the promotion of smoking as cool, fun, glamorous.

“About 13 people die prematurely every day from smoking-related illnesses … this is a bill to protect children and young people from being tempted from trying cigarettes.”

The legislation passed 108 to 13 votes, with opposition from New Zealand First and the Act Party.

New Zealand First health spokeswoman Barbara Stewart said all parties would be in agreement as to the damage that smoking could cause.

However, New Zealand First had concerns about a lack of evidence that plain packaging was effective, and possible unintended consequences such as an increase in black market sales.

“We have to remind people that $1.6 billion in excise tax is going into the Government coffers every year … there is a clear ulterior motive here, and it is not public health, as it should be.

“We remain unconvinced that plain or standardised packaging is effective at reducing tobacco consumption.”

Plain packaging is part of measures designed to make New Zealand smoke-free by 2025, a key goal of the Maori Party. 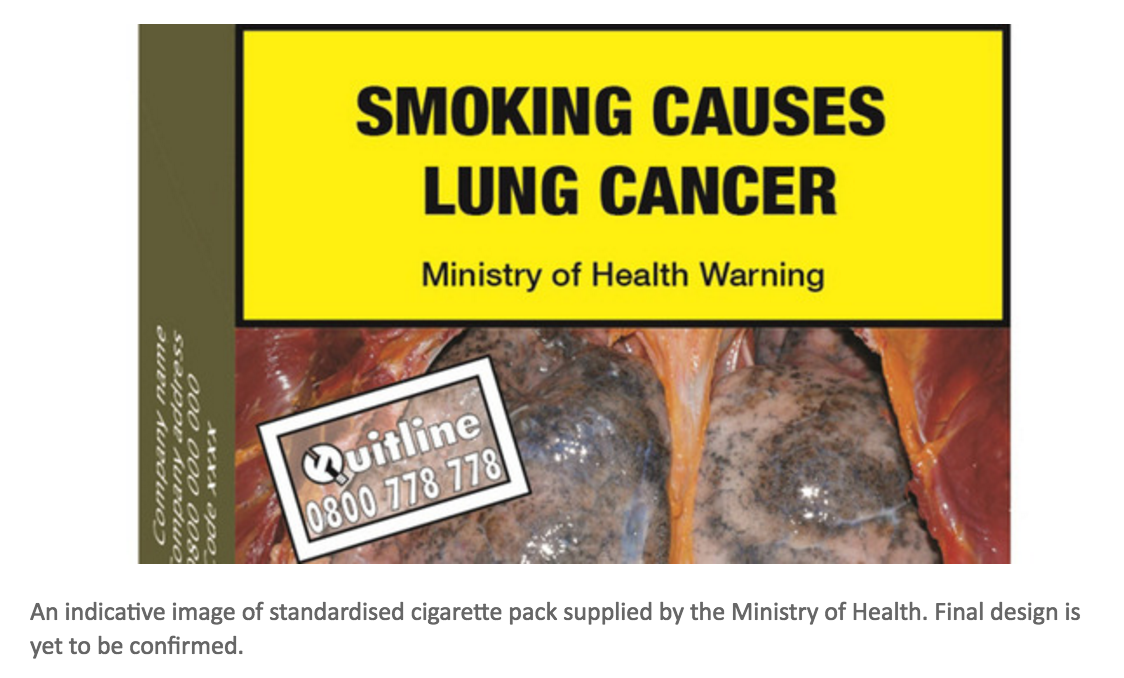 Fox stormed out of the TV interview after accusing Gietz of “peddling death and destruction and misery”.

Tonight, she said last night she was visited by a person whose wife had recently died after being a smoker for 40 years.

“He came to bring me his wishes to tackle tobacco control in this country. He said she tried everything … e-cigarettes, patches, cold turkey.

“She could not kick the habit, and eventually she died trying. Today I want to remember her.”

Plain packaging for tobacco is likely to be in place early next year.

The Government in May released draft regulations and a consultation document which aims to standardise the look of cigarette packs.

New Zealand had been keeping an eye on the outcome of legal challenges against Australia’s plain packaging, one from tobacco firm Philip Morris and another from tobacco-producing countries via the World Trade Organisation (WTO).

Australia won the case against Philip Morris in December.

The WTO challenge is ongoing, but the Government received advice late last year that the Government was on a “firm footing” to progress plain packaging because several other countries, including the UK and Ireland, had introduced it.

These countries did not face a challenge under the WTO.

A pack of 20 cigarettes in New Zealand will increase from about $20 now to around $30 in 2020 after hefty excise increases were announced as part of May’s Budget.

The tax on tobacco will rise by 10 per cent on January 1 each year for the next four years.
That is expected to bring in an extra $425 million in tax over that period.

It will affect the about 15 per cent of adult New Zealanders who smoke each day – about 550,000 people.

Lotu-Iiga last month released a consultation document that includes a proposal to legalise the sale of e-cigarettes in New Zealand.

Nicotine patches and gum can be bought, but nicotine e-cigarette liquid must be bought from overseas.

Other countries, like the UK, allow the e-cigarettes or vaporisers to be sold in supermarkets and dairies.

The products would not be allowed to be used in smoke-free areas, and safety measures including child-proof containers will be considered.