Government seeks to push through legislation by May after dropping previous proposal following tobacco industry lobbying. 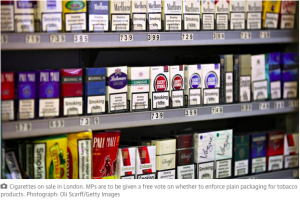 The government is to press ahead with legislation on plain packaging for cigarettes before the general election after years of delay and conflicting claims about the success of an Australian scheme.

Ministers have consulted on the measure for more than two years and were minded to press ahead with legislation, but the proposal was dropped from the last Queens Speech in 2013 on the insistence of David Cameron. The government, facing intensive lobbying from the tobacco industry, insisted it needed more time to consider the implications of plain packing, including on tobacco smuggling.

The latest move, involving a free vote for MPs, also came as Labour has been making political inroads on the NHS, focusing on extended A &E waiting times. Labour produced its own public health white paper last week with a renewed commitment to introduce plain packaging.

The announcement on plain packaging was made by the health minister, Jane Ellison. She said the current “comprehensive” approach was working well, but insisted it was important not to be complacent.

In an unusual move, she said regulations enforcing plain packaging would be laid before parliament in time to be agreed by both Houses before the general election in May. The vote, likely to see libertarian Tories voting against the measure, will also do something to dispel the suggestion the Commons has become a “zombie parliament” with nothing to agree or legislate on before the election. Ellison said that plain packaging was a “proportionate and justified response” because of the health risks associated with smoking. Smoking-related disease remains the main cause of preventable deaths in the UK, killing more than 100,000 people a year.

She also announced that a ban on smoking in private cars would come into force on 1 October.

There have been disputes about how successful Australian plain packaging laws have been in cutting smoking. Cancer Research UK welcomed the move, which will make brightly-coloured and slickly- designed packs illegal, with all packs becoming uniform in size, shape and design with large picture health warnings.

Initial consultation into standard packs began nearly three years ago in April 2012. Since then there has been the independent Chantler review which came out in favour of standardised tobacco packaging to reduce the appeal to children and young people. There has also been a second consultation as well as a vote in parliament overwhelmingly in favour of standard packs.

Figures released by Cancer Research UK show big support for the reform plans. Nearly three-quarters (72%) of voters across the political spectrum said they supported removing the colourful designs and branding from tobacco packaging, replacing them with packs of uniform size and shape with prominent health warnings. Only 15% opposed the measure.The new survey of more than 1,800 adults from across Britain reveals high levels of support from potential Conservative, Labour, Liberal Democrats and Ukip voters.

Ann McKechin, the Labour MP who forced a debate on the issue in the Commons, said: “In Australia, where plain packaging legislation was introduced in 2012 and generic packaging before that, smoking rates have fallen dramatically.Daily smoking levels are at a historic low of 12.8%, and the average number of cigarettes smoked is now just 96 per week compared to 111 in 2010.

Deborah Arnott, chief executive of the health charity Ash, said: “We won’t be taking anything for granted in the run-up to the final vote. If the regulations do become law this will be the most important public health reform of this parliament.”

Luciana Berger, Labour’s health spokeswoman, said: “The government has taken almost a year to take this next step and in that time 200,000 children would have taken up smoking. They must now press ahead without delay to ensure that this vital measure is introduced as soon as possible.”

“The Government must now press ahead without delay to ensure that this vital measure is introduced as soon as possible.”

• The headline on this article was amended on 26 January 2015. An earlier version referred to “UK” where it should have said “England”.