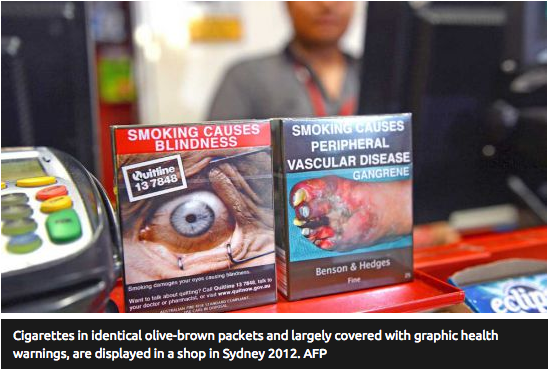 Health experts have thrown their weight behind a provision in the draft tobacco-control law that will require graphic health warnings to cover half the face of Cambodia’s cigarette packages.

“The warnings will encourage smokers to quit, because [they can see] the illnesses caused from smoking. It can help to protect children and young people from starting to use tobacco,” said Chea Chor Daphea, vice president of the National Center for Health Promotion, at a workshop yesterday on the impacts of tobacco organised by the Ministry of Health.

Daphea said that images are significantly more effective than text for providing public information about the hazards of smoking and are expected to help combat tobacco-related deaths, which kill 10,000 Cambodians annually. Worldwide, tobacco is projected to cause 8 million annual deaths by 2030.

“[The pictures] are very important, because it provides information to the people. If they cannot read, they can see: smoking causes lung cancer,” said Dr Yel Daravuth, technial officer for the World Health Organization’s Tobacco-Free Initiative.

According to article 10 of the law – first drafted in 2003 – the images must cover 50 per cent of the cigarette box. The WHO is calling on the government to enact the regulation with haste, Daravuth said.

“In other countries, tobacco manufacturers tried to prevent picture warnings, saying there isn’t clear evidence about the benefits of the picture and that they cause smuggling, but this citation is not accepted by WHO,” he said, explaining that visual messages create a mental cue and positively reinforce quitting.

According to the WHO, Cambodia is the only ASEAN country yet to pass smoking legislation. Currently, two million Cambodians smoke.

The law is expected to be discussed at the National Assembly in late April.