Skip to content
27 January, Vientiane: WHO Representative to Lao PDR Dr. Juliet Fleischl faced the media at the WHO offices in capital city of Vientiane.
Dr. Fleischl discussed the outcomes of the recently concluded country assessment of the WHO on the Framework Convention on Tobacco Control (FCTC) implementation, particularly Articles 5.3 (Tobacco Industry Interference) and Article 6 (Tobacco Taxation).
Dr. Fleischl reiterates that Lao PDR, 4,807 people die annually due to tobacco related diseases, and due to these deaths, the country ranks 3rd in the region on smoking-attributable deaths; uptake of youth smoking is on the rise; and tax on cigarettes are still very low, and the government has lost so much revenue.
(see infographics on Lao PDR: https://seatca.org/appeal-support-ash-uk-petitioning-imperial-tobacco-change-org-8/)
This comes as Imperial Tobacco is under pressure to release the Lao PDR government from a 25-year unfair tobacco tax contract. 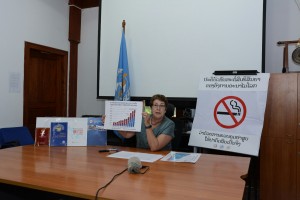 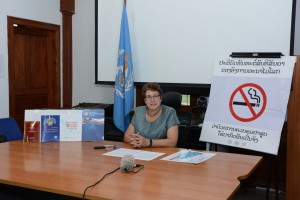