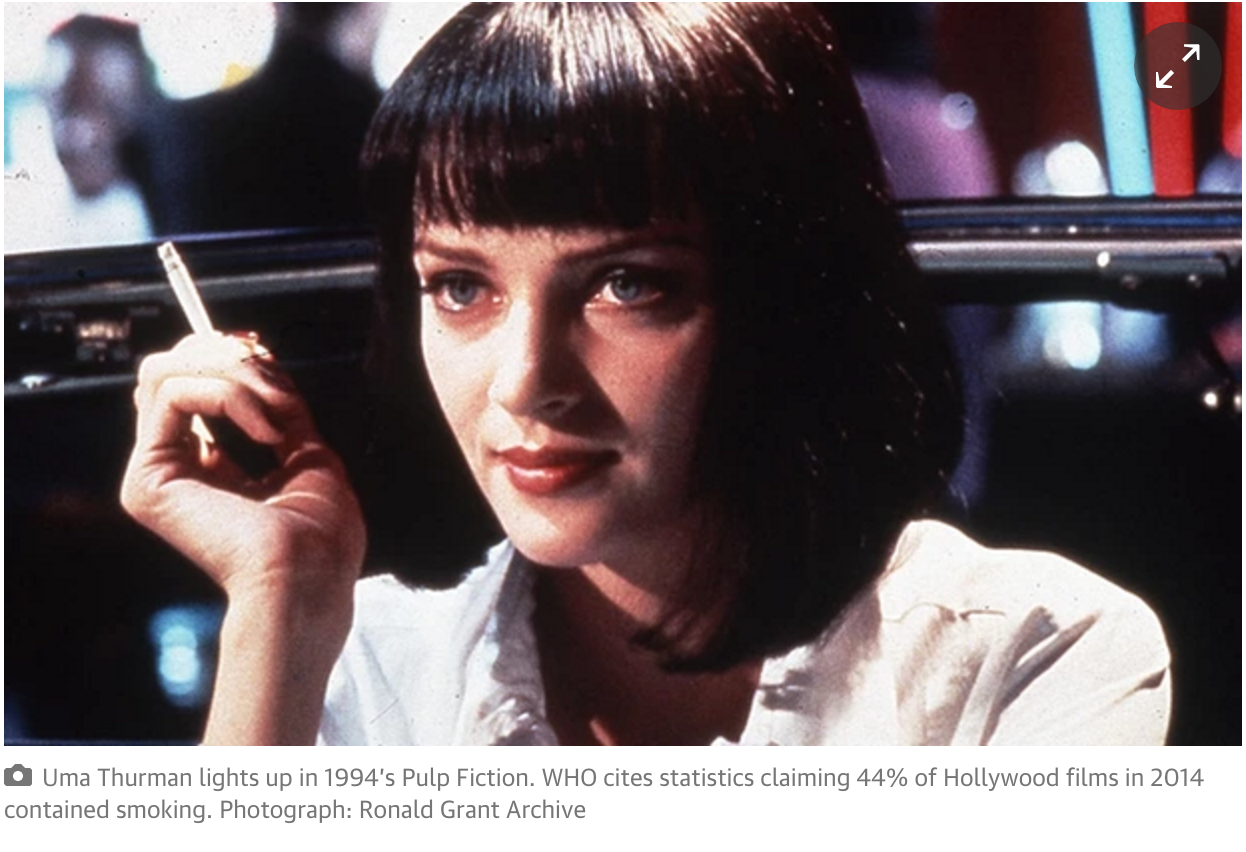 Films showing smoking should be given an adult rating to protect children from exposure to the “last frontier” in tobacco promotion, the World Health Organisation has said.

Hoping to highlight the issue in the run-up to the Oscars, WHO said that as countries crack down on tobacco advertising and sponsorship, cigarette companies are turning to the film industry to recruit the next generation of smokers.

In its report, Smoke-free Movies, published on Monday, WHO cites statistics claiming that 44% of all Hollywood films, and 36% of films rated for young people in 2014 contained smoking.

It illustrates the exposure this gives the deadly habit with the example of Transformers: Age of Extinction, which features a cigar-smoking robot.

In 2014, the film delivered a total of 2.6bn “impressions” of tobacco use, which they calculate by a film’s tobacco incidents multiplied by its paid cinema admissions, in China alone, according to the report.

Dr Armando Peruga, programme manager of WHO’s tobacco-free initiative, said: “We saw for a while a decrease in the tobacco incidences in films and other entertainment productions. But based on what we monitored, we saw, in 2013-14, a turning point, a picking up of the number of tobacco scenes.

“The tobacco industry has been looking at alternatives to promote their products and films is the last frontier for tobacco companies.”

WHO first called for films featuring smoking to be restricted to adult audiences – generally those aged 18 or over but the age of majority varies by country – in 2009.

Peruga said it had renewed its campaign because no government had implemented the recommendation and amid fears that, as countries implement a WHO convention to ban tobacco advertising, promotion and sponsorship, films become seen as a lucrative alternative.

A US study suggests that on-screen smoking accounts for 37% of all new adolescent smokers. In 2014, the US Centers for Disease Control and Prevention estimated that exposure to on-screen smoking would recruit more than 6 million new, young smokers from among American children in 2014, of which 2 million would ultimately die from tobacco-induced diseases.

Peruga said that attempts, largely in the US, to persuade film companies to comply with two other recommendations of the report – not to show brands and to include a statement in the credits saying that film producers receive nothing of value in exchange for tobacco products appearing – had fallen on deaf ears.

A study of the 15 most commercially successful films in the UK between 1989 and 2008 found tobacco in 70% of all films, 92% of which were rated for children aged younger than 18. Specific brands appeared in 9% of films and was nearly twice as likely to occur in films originating wholly or in part in the UK.

“In some films the percentage of tobacco scenes are far greater than you would see in the society in which the film is set,” said Peruga.

Simon Clark, the director of the smokers’ group Forest, said: “Disney has a no smoking policy for its PG 13-rated films, and that’s fine, but films aimed at older audiences must be allowed to reflect real life, not some sanitised smoke-free world.

“Penalising films that portray smoking by giving them a rating equivalent to an 18 certificate is a clumsy and unnecessary attempt at censorship.”