France is to impose plain packaging for cigarettes as part of an anti-cancer drive that also sees extra taxes on manufacturers and more steps to stop sales to minors. 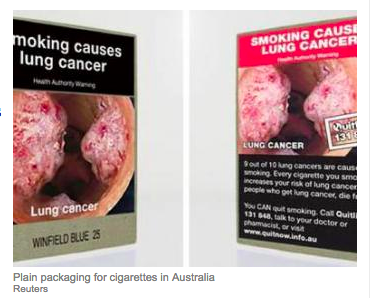 In an ongoing debate on a health law that has already seen measures to combat anorexia,

French MPs on Friday passed a government-backed proposal to force cigarette-manufacturers to use plain packets without logos, identical in all respects apart from a small mention of their name.

Australia passed a plain-packet law in 2012 and Ireleand and the UK have done so this year.

The debate was heated with some right-wing MPs claiming that the measure would encourage smuggling and that the government was “assaulting” tobacconists.

“Tobacconists feel betrayed,” declared Elie Aboud of the mainstream right UMP. “Cancer is not their problem.”

The “puritan world” of anti-smoking campaigners will drive young people to “violent escapades in the Middle East”, UMP MP Nicolas Dhuicq, a psychiatrist by profession, told his fellow MPs.

Health Minister Marisol Touraine defended the proposal, pointing to “encouraging results” in Australia, which have reportedly seen the number of smokers falling three per cent in a year.

More controversy is expected on Tuesday when MPs debate a proposal in the law to open more “shooting galleries” for drug addicts.