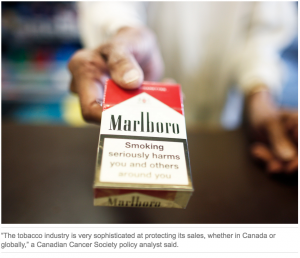 As it struggled to maintain sales and fought growing pressure from public health officials over the past 25 years, the tobacco industry embraced an unlikely ally: the anti-AIDS cause, a new Canadian study concludes.

With donations to HIV/AIDS groups and calls for more government action on the disease, Big Tobacco tried to enhance its own image — and steer authorities away from the smoking scourge, the Simon Fraser Universityresearchers suggest.

Partly based on a trove of millions of internal company documents, the study paints a picture of an elaborate campaign to use concern for HIV in defence of a product that exacts an even worse health toll.

A British American Tobacco (BAT) official, eager to discredit a major anti-smoking conference, once argued AIDS, not tobacco, should be “public enemy number one”; Philip Morris International sponsored a tennis tour to support HIV groups; BAT put on an HIV conference in Nigeria.

“It was a very conscious strategy,” says Julia Smith, a post-doctoral fellow with the Global Tobacco Control program of Simon Fraser’s Health Sciences faculty. “HIV … was legitimately so terrifying that it was also a good health issue to put up and say, ‘Wait, this has to be the urgent priority, as opposed to looking at tobacco control.’ ”

Philip Morris declined to comment on the study; British American Tobacco did not respond to requests for input.

Being the disease of the century and a preventive disease, AIDS should be ‘public enemy No. 1.’

While such practices continue in parts of sub-Saharan Africa, AIDS groups elsewhere have disavowed tobacco funding — one HIV advocate calling the former financial links a “pact with the devil,” the paper notes. The authors say that should be an example for charities that still accept the money, including some in Canada.

Since 2010, for instance, the United Way of Toronto has accepted donations of more than $100,000 a year from Philip Morris – maker of Benson and Hedges cigarettes — company records indicate.

“Any partnership with a tobacco company does provide that company and that industry with legitimacy,” Smith said.

United Way’s media spokesperson could not be reached for comment.

The Simon Fraser study draws heavily on information gleaned from the Legacy Tobacco Documents Library, a collection of more than 14 million internal industry records filed as part of lawsuits in the United States.

It notes that as the North American HIV epidemic continued into the 1990s, Philip Morris donated to an array of U.S. AIDS groups, giving $3 million to a patient meal program, and raising $4 million through the Virginia Slims Legends tennis and music tour.

The same company also launched the Fair Play program, urging AIDS and other health organizations to demand more government support, while suggesting that too much was being funnelled into the anti-tobacco drive.

Philip Morris even prepared a script for AIDS groups to help them respond to potential criticism, suggesting in part they say that tobacco companies were among the first to support the cause, and believe in “freedom of choice.”