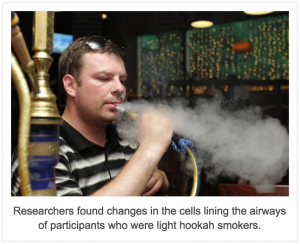 There is a common misconception that smoking tobacco from a hookah or waterpipe is somehow less harmful than cigarette smoking. Recent studies have proven hookah smoking carries many of the same health risks, and now, a new study provides evidence of lung function abnormalities among light-use hookah or waterpipe smokers.

The study, published in the American Thoracic Society’sAmerican Journal of Respiratory and Critical Care Medicine, was led by Dr. Ronald Crystal, from Weill Cornell Medicine at Cornell University in New York.

Medical News Today recently reported on a study that found just one hookah session delivers 125 times the smoke of one cigarette.

However, research into the safety of hookah smoking is limited, say Dr. Crystal and colleagues.

Hookahs deliver fruit-flavored tobacco, which is situated in a bowl and burned with charcoal. The tobacco smoke bubbles through water and is then carried through a hose, from which the user inhales the smoke.

Common in the Middle East, hookah smoking is growing in popularity in the US, particularly among young people. Despite this growth, there are currently no federal regulations for use of hookahs or water pipes.

According to the Centers for Disease Control and Prevention (CDC), hookah smokers may absorb more of the toxic substances that are also found in cigarette smoke, due to the way a hookah is used.

In addition, hookah smokers face many of the same risks for diseases that cigarette smokers do, including oral cancer, lung cancer, stomach cancer, reduced lung function and reduced fertility.

‘Marked changes in the cells lining the airways’

To further investigate the health risks of hookah smoking, the researchers recruited light-use waterpipe smokers in New York City, who were an average age of 24. Light-use smoking was defined as smoking no more than three bowls per week, for fewer than 5 years.

The team assessed waterpipe smoking effects on the participants by using clinical and biological parameters, including cough and sputum (saliva and mucus coughed up from the respiratory tract) scores, as well as lung function.

Results showed that, compared with non-smokers, hookah smokers coughed more and produced more sputum. Additionally, there were “marked changes in the cells lining the airways” in hookah smokers.

They also observed an increase in small particle shedding by lung endothelial cells, which Dr. Crystal says “is indicative of ongoing damage to the capillaries.”

“This is a small study,” he adds, “but our study results justify initiating large epidemiologic studies to further assess the harmful effects of waterpipe smoking.”

He says that although hookah smoking is uncontrolled, “the data raise red flags that even limited use may cause lung damage.”

Concluding their study, the researchers write:

“Young, light-use waterpipe-only smokers have a variety of abnormalities in multiple lung-related biologic and clinical parameters, suggesting that even limited waterpipe use has broad consequences on human lung biology and health.

We suggest that large epidemiologic studies should be initiated on the harmful effects of waterpipe smoking.”

MNT previously reported that hookah bar workers are at risk from secondhand smoke.