Date:
April 5, 2016
Source:
Helmholtz Centre for Environmental Research – UFZ
Summary:
If mothers smoke during pregnancy, they influence the epigenetic programming of their unborn child’s genetic make-up in the long term. This may give rise to an increased risk of the development of disease risks later in the child’s life. Researchers discovered that these changes are not limited to individual regions of DNA. 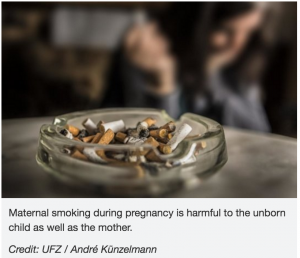 Maternal smoking during pregnancy is harmful to the unborn child as well as the mother. This is a known fact. “For the first time, we can now demonstrate that exposure to tobacco smoke also causes epigenetic changes in enhancers of gene expression,” said Irina Lehmann, Environmental Immunologist at the UFZ. These deregulated enhancers are distributed throughout the child’s entire genome.

Epigenetic changes form part of countless processes that occur during human development. The genetic material functions as a blueprint for all cells. In order for different cell types, e.g. liver or muscle cells, to develop, certain genes must be activated or deactivated at certain times. One of the ways this happens is through epigenetic changes which can be disrupted by various environmental factors. In their latest study, the group of researchers from Leipzig and Heidelberg revealed that epigenetic changes related to tobacco smoke increase the risk of children developing lung diseases.

For their current work, two groups of mother-child pairs were examined: mothers who smoked during pregnancy and mothers who were not exposed to tobacco smoke. Together with the genome researchers working with Roland Eils at the DKFZ and the Heidelberg University, the researchers examined the epigenome of the mothers and the children. They wanted to find out whether there was evidence of epigenetic changes in the smoker families that did not occur in the non-smoker families — and which consequences this may have for the children’s health. “We were able to find evidence of epigenetic changes in smoking mothers as well as in the umbilical cord blood of the newborn babies,” said Lehmann. The changes thus occur in the womb and affect the unborn child’s gene regulation.

The researchers determined that smoking particularly affects enhancer regions in the genome. Enhancers are DNA regions that regulate the expression of one or more genes. Lehmann explained that: “If an enhancer region is affected by the effects of smoking, this may lead to deregulation of several genes at the same time.” The researchers give an example of the consequences of a deregulated enhancer in their work: the enzyme JNK2 (c-Jun N-terminal protein kinase 2) plays a role in inflammatory responses. If the enhancer that activates JNK2 is now affected, this may increase the risk of lung diseases in the children’s later life.

The researchers also determined that the epigenetic effects observed in the umbilical cord blood at birth can still be seen several years after the child is born. However, it could not be ascertained beyond doubt whether these effects are long-term impacts of exposure to smoke prior to birth. “Children who are exposed to tobacco smoke even before being born usually continue to be exposed to this after their birth,” said Lehmann. She added that the prolonged exposure to cigarette smoke after birth may contribute to the observed stability of epigenetic changes.

In their analysis, the researchers identified more than 400 enhancers affected by tobacco smoke. They regulate genes that play a role in a variety of diseases such as diabetes, adiposity or even cancer. “This discovery will allow us to start understanding the mechanisms that make smoking the cause of such a wide range of diseases,” said Roland Eils.

The insights from this research are intended to provide starting points for new options for treating environmental diseases. “The better our understanding of deregulation caused by environmental factors, the better we will be able to respond to this. Nevertheless in the case of tobacco smoke, avoiding exposure is still the best alternative,” said Lehmann in summary.