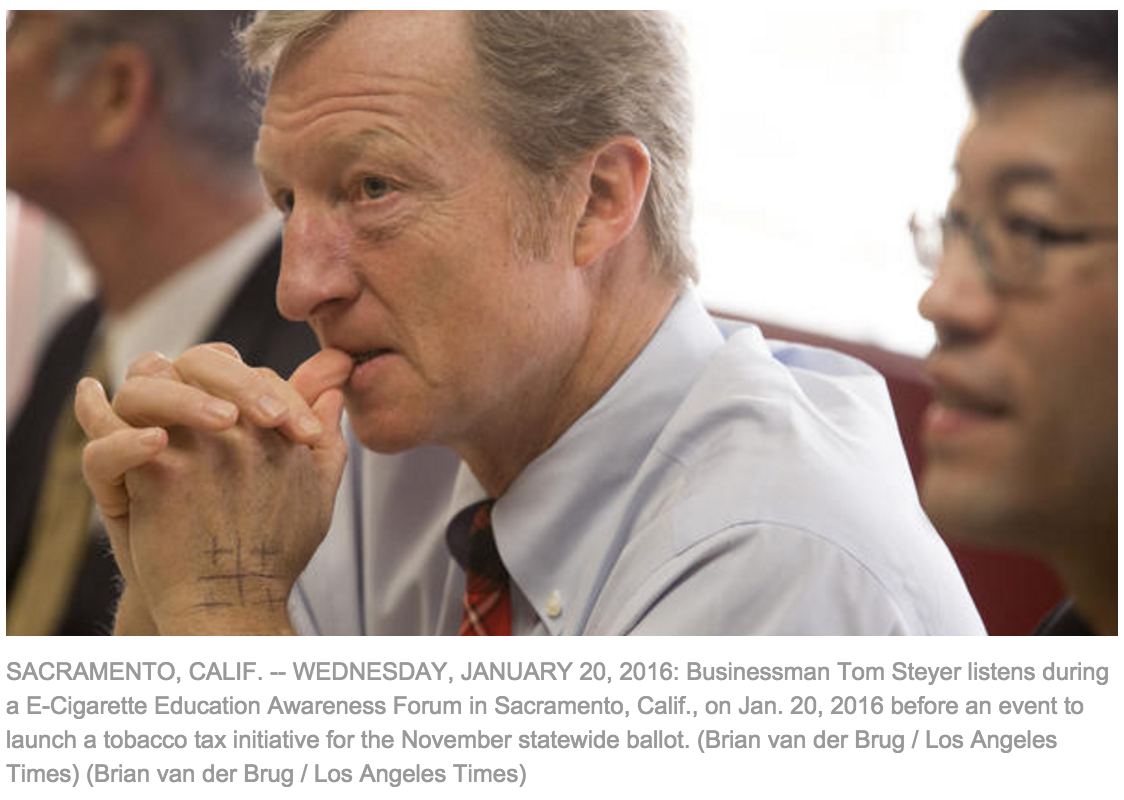 months after California’s Legislature failed to act, a coalition of health experts and the state’s schools chief on Wednesday launched a petition drive to qualify an initiative for the November ballot that would raise the cigarette tax by $2 per pack.

“You can’t sugarcoat it: Smoking is deadly,” said Steyer, a billionaire and possible 2018 gubernatorial candidate who has contributed $1 million toward the initiative campaign.

“This initiative aims to save lives and stop teens from ever picking up the deadly tobacco habit in the first place,” he said.

Steyer said the issue is personal to him, because his mother smoked three packs of unfiltered cigarettes a day and died of lung cancer.

The proposal would also extend tobacco taxes to electronic cigarettes, whose use by teenagers tripled between 2013 and 2014, Torlakson said during a news conference at C.K. McClatchy High School in Sacramento, where he met with students who talked about their use of the devices.

Bills that would have raised the cigarette tax by $2 failed to win approval by the Legislature before it adjourned for the year in October. The proposals are up for reconsideration.

“After two decades of inaction by California legislators we really need voters to take this into their own hands,” said Lori Bremner, grassroots director of the American Cancer Society Cancer Action Network.

The tobacco industry has spent millions of dollars to defeat legislation and ballot measures that would have raised the state tax, which is currently 87 cents per pack; New Yorkers pay $4.35 a pack.

The campaign must collect the signatures of 585,407 registered voters by June 13 to qualify the initiative for the November ballot.

The initiative, which would amend the state Constitution, drew immediate opposition from Cynthia Cabrera, president of the Smoke-Free Alternatives Trade Assn., which represents the electronic-cigarette industry.

“The vapor debate should focus on getting the four million adult smokers in California to make the switch to vaping,” Cabrera said. “Attempting to tax vapor products like cigarettes is a flawed initiative and the wrong approach, potentially leading adults back to smoking cigarettes.”

“We are opposed to large tobacco and e-vapor tax increases proposed in this initiative,” Sutton said. “We are reviewing the proposed initiative and considering our options.”