MANILA, Philippines – Is it possible for every Filipino to be healthy? This was the question posed by Dr. Ulysses Dorotheo, project director of the Southeast Asia Initiative on Tobacco Tax at the Southeast Asia Tobacco Control Alliance (SEATCA) in a forum Wednesday billed “Healthy People, Wealthy Nation” at the Pan Pacific Hotel in Manila. 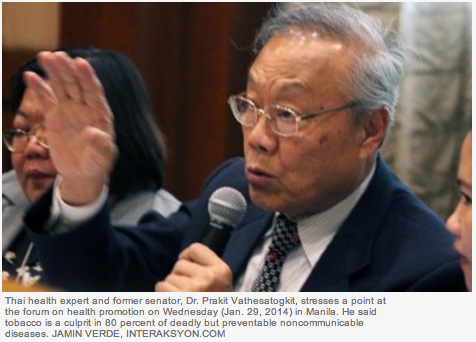 What may seem like an impossible dream may be achievable if Filipinos change the way they approach health, he stressed.

According to Dorotheo, the medical community has been too focused on health care or disease management–how to treat, rather than prevent, disease—instead of looking at health promotion, which boosts the resources people can take advantage of for their health.

For example, Singapore is promoting exercise among its citizens not by telling them how many steps they should walk each day. Rather, the government built walkways for pedestrians to use to and from their homes and offices. The paths aboveground give them a nice view of the trees, further encouraging this alternative mode of transport.

Health promotion, said Dorotheo, is about building an environment for a healthy population. It focuses not just on people who have diseases or are at risk for diseases, but on those who are well, too.

Thus, he said, their alliance is strongly urging lawmakers to spend on health promotion. Not only do these government officials have healthier constituents, but they have a return on investment, as well. In the United States, said Dorotheo, they gain anywhere from $3 to $5 for every dollar spent on health promotion. In contrast, when they spend for disease management, they gain nothing.

In addition, the government spends P188 billion annually on the top four NCDs, particularly due to losses in productivity, according to HealthJustice, SEATCA’s co-organizer of the forum and a non-profit organization that works to bridge public health and law.

HealthJustice managing director Irene Patricia Reyes said they were advocating for the government to have a specific allocation for health promotion.

The sin tax law funds universal healthcare, which provides for social health insurance coverage, health awareness programs, and the attainment of health-related Millennium Development Goals. Now that the implementing rules and regulations of the law are being crafted, health promotion is being identified as a program under health awareness. This does not guarantee, however, that money will be allocated specifically for this, said Reyes.

“It is very important to specifically earmark for health promotion,” she said. This will ensure that the fund will go here, and will not be diverted to other programs of the government.

This health promotion fund must be focused on sustainable and innovative health promotion activities, said Dorotheo, explaining that falling back just on old practices would not produce different results.

In other countries, he said, the source of funding of health promotion agencies is a surcharge tax, which would be agreeable to “people who hold the purse strings” because they would not be “deprived of their general budget”. In Thailand, for example, a 2-percent surcharge from alcohol and tobacco companies is used for their health promotion activities.

“No need to haggle with budget process every year,” added Dorotheo.

According to him, Brunei, Laos, Malaysia, Singapore, Thailand, and Vietnam already have health-promotion or tobacco-control funds or funding mechanisms.

Tobacco: culprit in 80% of NCDs

Tobacco control is important because tobacco is one of four top risk factors responsible for 80 percent of the NCDs, according to Thai health expert and former senator Dr. Prakit Vathesatogkit. Alcohol, inadequate exercise, and poor diet are the others.

He added that companies – specifically tobacco and alcohol ones – must be regulated. To be able to do so, research resulting in data showing how harmful these products are must be funded, as well.

“We want to take away the risk factors before they get sick,” he said. Health promotion, he explained, was also about having public policy to control harmful products.

However, he did recognize the common problem of developing countries–that though there are many sound laws and policies, they are poorly implemented. Still, people must try to achieve the good, even if it may be difficult, he said.