STOP has just started and aims to bring new meaning to the phrase “asking for a light,” when it comes to smoking.

STOP is an acronym for a new $20 million Bloomberg Philanthropies initiative to create a global watchdog to shed more light on the tobacco industry’s complex marketing and sales practices. The full STOP is “Stopping Tobacco Organizations and Products.” Back on March 7 at the 2018 World Conference on Tobacco or Health, billionaire philanthropist Mike Bloomberg announced the opening of a competition to lead STOP. Teams comprising of up to 3 different organizations could apply as long as at least one organization was based in a low- or middle-income country since low and middle countries have recently become targets of tobacco companies. And yesterday, Bloomberg Philanthropies announced the following winning team:

Dr. Kelly Henning, who leads the Bloomberg Philanthropies’ Public Health program, called STOP “an opportunity is to coordinate more robust efforts to disseminate information about the tobacco industry’s strategies and establish connections between this work and on the ground tobacco control action.” According to Henning, the STOP initiative will not only enhance existing efforts but also explore newer approaches such as leveraging “crowdsourcing and mobile devices.” Additionally, she mentioned that the STOP initiative can assist whistleblowers, tobacco industry insiders who can provide key information but may be afraid to do so without the support of a strong international organization. 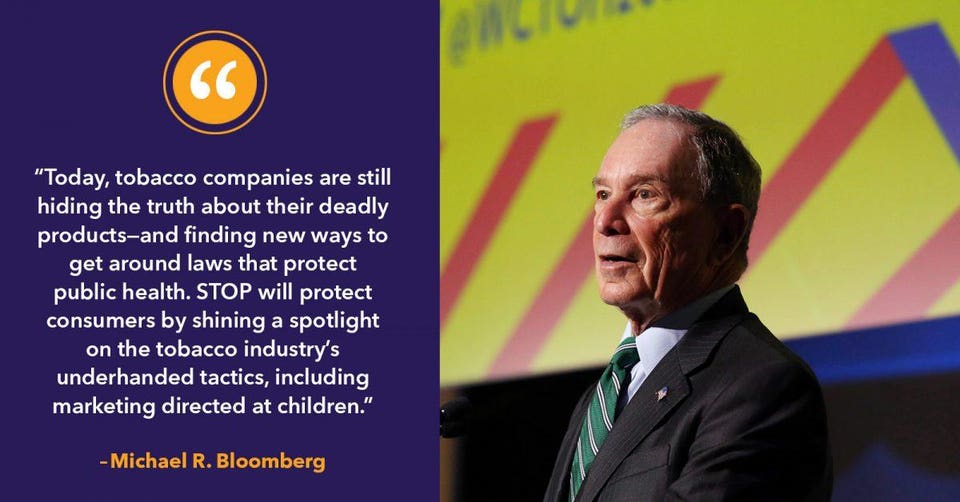 Thus, going forward, if you are asking for a light, the answer may be STOP in more ways than one. If you want a light of a cigarette, consider the myriad of potential bad health consequences of smoking such as increasing the risk of coronary heart disease or stroke by 2 to 4 times and lung cancer by 25 times or more, as indicated by the Centers for Disease Control and Prevention (CDC). If you want more light on the tobacco industry’s complex tactics, then STOP may be a good place to start.