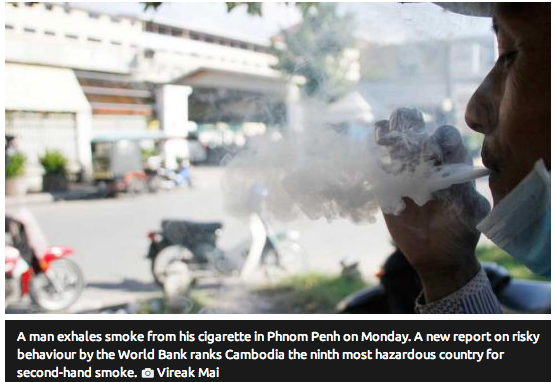 The World Bank report, which was released on November 20 and titled Risking Your Health, claims nearly 50 per cent of all Cambodians under the age of 15 are “exposed” to second-hand smoke.

Cambodia was listed ninth among countries surveyed with the highest rate of second-hand smoke exposure for the young – on par with China – with 48 per cent reporting to have been exposed to tobacco smoke in their family home.

Indonesia recorded the highest percentage of any Southeast Asian country at 65 per cent.

The report concludes that developing nations such as Cambodia should adopt “strong enforcement mechanisms” such as additional taxes and stronger legislation to curb the growing rate of “risky behaviours” such as smoking, alcohol consumption, unsafe sex and illicit drug taking – all of which were identified as areas of concern in Southeast Asian countries.

Worldwide, more than 600,000 people die from illnesses caused by exposure to second-hand smoke, with children accounting for nearly 30 per cent of deaths.

“The morbidity toll, however, fell the hardest on children, who accounted for 61 per cent of all disability-adjusted life years lost, with close to six million children in 2004 suffering from lower respiratory infections induced by second-hand smoke,” the report states.

The report’s author, Damian de Walque, expressed fears that Cambodia’s high percentage of smokers would lead to a “large” disease and mortality burden in the future and that anti-tobacco marketing campaigns would not alleviate the country’s smoking and second-hand smoking issues.

“Based on the experience from other countries, it is unlikely that public information about the dangers of smoking alone will be sufficient to lead to a decline,” he told the Post.

“Taxes on tobacco are usually considered a ‘win-win’ because they increase government revenue while decreasing smoking prevalence and therefore improving public health.… This might prove to be unpopular at first, but in many countries, tobacco taxes have been quite successful. ”

But the figures represent just a fraction of a bigger issue, according to Mom Kong, executive director of NGO Cambodian Movement for Health.

Kong estimates that as much as 80 per cent of all Cambodian children and 25 per cent of women suffer smoke inhalation both at home and in public places.

Kong and the Cambodian Movement for Health are calling on the government to revise the current tax rates of 20 per cent on locally made cigarettes and 25 per cent on imported cigarettes.

“[We] would like to see it increased to two-thirds of the total price, between 65 to 80 cents per packet.… The government should implement new legislation as well as continue to stop tobacco product advertising . . .
Legislation and more education” are the answers, he said.