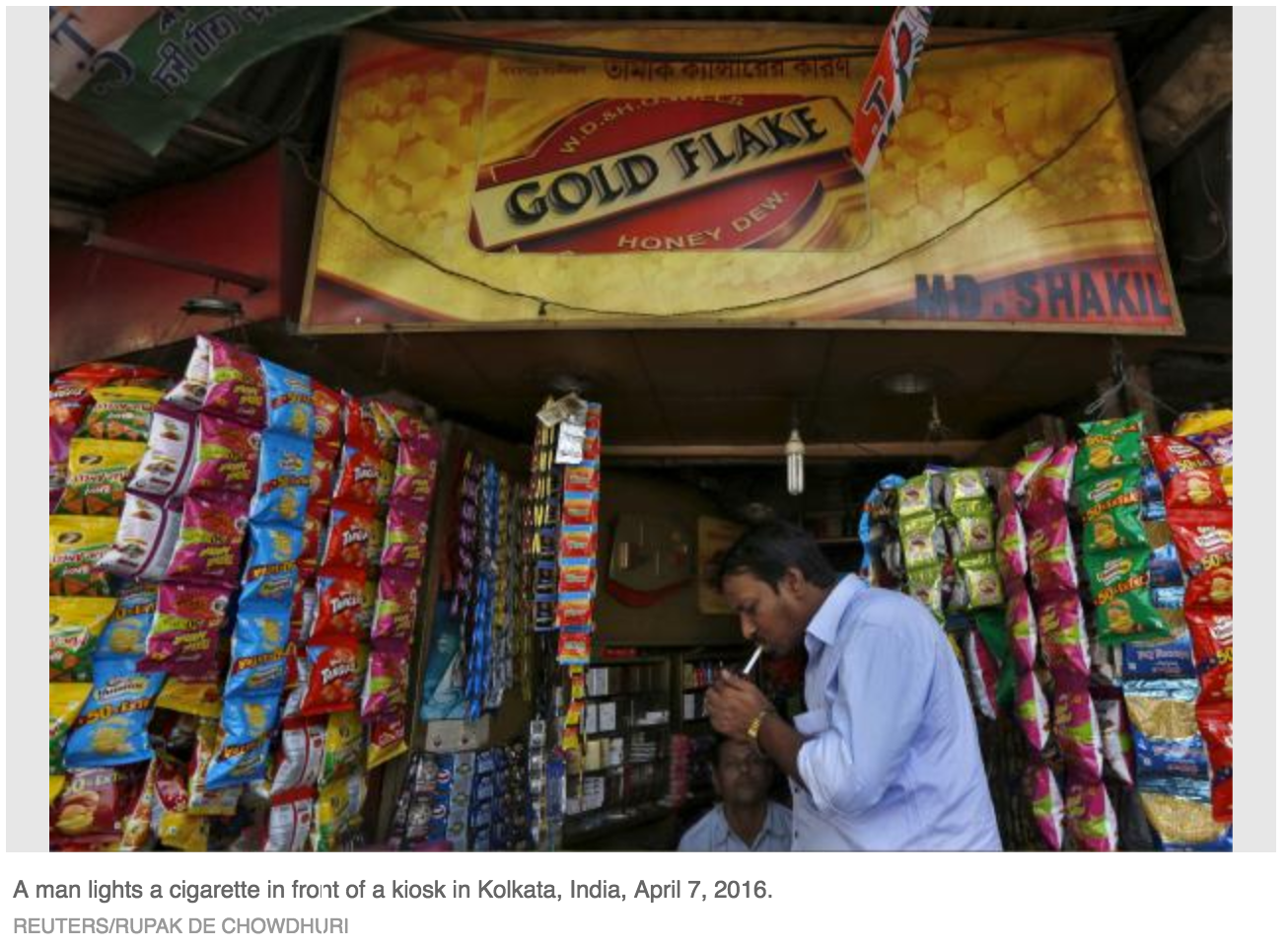 India’s tobacco industry has sought to delay strict new health warning rules by appealing to the Supreme Court, a move anti-smoking activists say could backfire given that the court has ruled against cigarette makers in the past.

Earlier this month Indian tobacco companies, some backed by “Big Tobacco” firms in the West, effectively went on strike by closing factories in protest against demands that 85 percent of a cigarette packet’s surface be covered by health warnings, up from the older requirement of 20 percent.

The industry estimates the stoppages cost it as much as $68 million a day, taking cumulative losses to up to $850 million.

Similar battles have played out around the world in recent years as governments try to discourage smoking. On a few occasions, major tobacco producers have resorted to drastic action by freezing output.

That tactic worked in India in 2010, when the government delayed a set of warnings proposed at the time after the industry shuttered plants.

But this time New Delhi’s room to compromise is more limited, court documents and interviews with federal health ministry officials and activists suggest.

The documents show how a small group of health activists have outmanoeuvred the $11 billion industry and cornered the government into implementing the rules on April 1.

Their strategy has left the Supreme Court as one of the last avenues of appeal for cigarette makers.

“The tide has turned and the tobacco industry is on a downhill slope,” said one of the activists, Sanjay Seth.

In 2013, the court pulled up the government for not being serious about tobacco-control laws.

The Tobacco Institute of India, an industry lobby group, declined to comment for this story. It has called the packaging rules drastic and impractical, saying the law will increase smuggling of illegal cigarettes.

On April 8, an industry group that represents makers of traditional smokes, or beedis, in south India went to the Supreme Court to challenge the rules, according to the filing seen by Reuters on Thursday. It was not previously reported.

The plea, filed by the Karnataka Beedi Industry Association, seeks a stay in enforcing the new rules, saying that they would bring the industry to a “grinding halt” and “cause grave and irreparable harm and loss”.

A hearing is scheduled for April 22.

The appeal against the packaging regulations, which are among the world’s strictest, does not directly involve major cigarette makers, but any ruling could also apply to them.

ITC declined to comment on the packaging row. BAT said it would be “inappropriate” to comment as they are “just shareholders in ITC”. PMI referred questions to Godfrey Phillips, which did not respond to requests for comment.

For Western brands, Indian cigarette sales represent a small yet significant part of global earnings, as they face long-term sales declines in developed markets and eye countries like India and its 40 million cigarette smokers for future growth.

In its 2015 report, BAT said the “adjusted contribution” from ITC was 280 million pounds ($400 million), about 5 percent of its annual profits.

The factory shutdown is hurting government’s coffers as well, costing it more than $10 million a day in tax revenues, according to industry estimates.

More than 8 million workers and their families are affected, and farmers’ groups are among those taking out large advertisements in newspapers criticising the legislation. But the government has kept a low profile.

“We don’t want to get into a duel with the industry on this,” a health ministry official said, adding that public opinion appeared to be in the government’s favour.

The new rules, which have been shown to help reduce tobacco consumption, put India, along with Thailand, at the top of the list of countries with the most stringent cigarette labelling.

The new rules were proposed by Prime Minister Narendra Modi’s government in 2014.

Initially, they were to be implemented from April 2015, but a parliamentary panel that included a lawmaker with a tobacco business forced the government to delay them as it assessed their impact on the industry and farmers.

That was when Seth, who works with the non-profit campaign Voice of Tobacco Victims, said he and a handful of other activists got involved.

Their strategy, he said, was to find a court that was likely to be sympathetic to their cause and then get someone to file a case challenging the delay.

The Rajasthan High Court was that venue, because then-Chief Justice Sunil Ambwani was seen as someone who would favour public health over big business.

Seth’s idea was incorporated into a tobacco-control case that a father-son team of lawyers with a history of such activism, Sita Ram and Rahul Joshi, were filing in the high court in Jaipur city last year.Within days, Ambwani ordered the government to implement the rules without delay.

Ambwani told Reuters he ruled on the merits of the case.

The government won a six-month extension, but has so far ignored the parliamentary panel that last month urged it to set warnings at 50 percent.