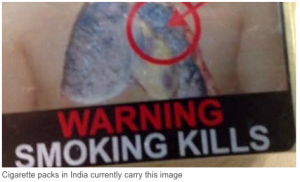 India says tobacco firms will soon have to reserve almost all the space on cigarette packs for health warnings.

Health Minister Harsh Vardhan said by law warnings in pictures and text would need to cover 85% of the surface of packs – just 15% would be for branding.

The new rules will be in force within months, he said, adding: “Tobacco means nothing else except death.”

India has about 110 million smokers and the government says smoking kills nearly a million people a year.

Government orders on new pictorial warnings have faced stiff resistance from tobacco manufacturers and the deadline for implementing them have been postponed a couple of times in the past.

The new rules take effect from 1 April next year and the health ministry said printed warnings will need to be carried on the front and back of cigarette packs, with highly visible pictorial warnings as well as the information that “tobacco causes mouth cancer”.

In 2010, two top tobacco manufacturers in India halted production in a row over new health warnings they were required to put on their packaging.

In recent years, India has come up with stringent rules to curb the use of tobacco.

Tobacco-related advertisements are banned and the sale of tobacco products to minors is also an offence.

A countrywide ban on smoking in public places came into effect in 2008 – although correspondents say it is blatantly flouted and poorly enforced.