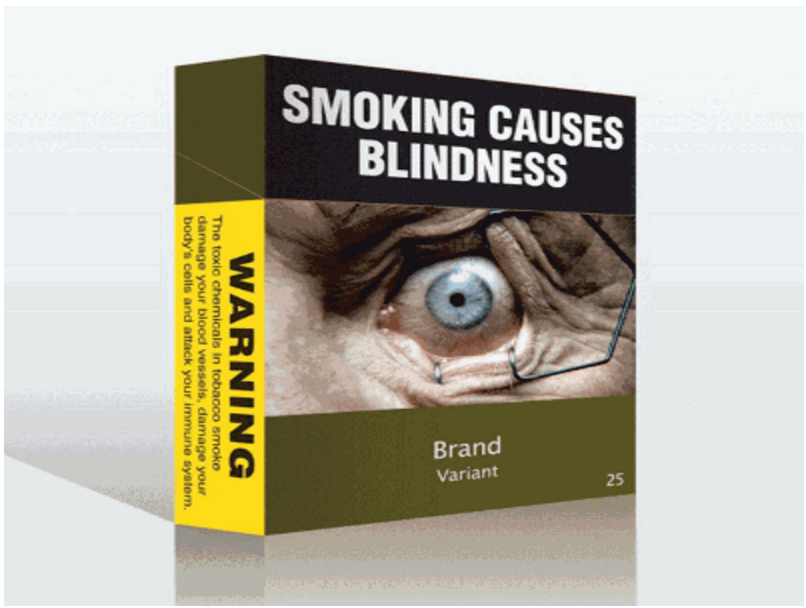 Appearances count for a lot, when it comes to tobacco control. So it’s not surprising that the government and Indian cigarette manufacturers are fighting over a few square inches on a packet.

For decades, cigarettes have been sold with images of nonchalance, sexiness and grown-up glamour. Despite anti-tobacco counter-advertising and a generational shift in attitudes, those associations are burnt deep into our minds.

These images can only be chased out with opposing images, goes the logic behind graphic labels. Pictorial warnings are meant to drill in the point that cigarettes are not badass, just very bad. The industry has fought warning labels every step of the way, including printing them in tiny typeface, or in gold lettering so that they are less visible.

The warning labels themselves have gone from a bland one-liner — “cigarettes cause lung cancer” — to dire and descriptive images of rotting teeth and suppurating tumours. These pictures have to be regularly shuffled so that familiarity with the picture does not blunt the force of the message.

There’s another way to do it, which is to make the packet itself a neutral background for the warnings. In 2011, Australia became the first country to force tobacco companies to use plain packs — with no company branding, colour, nothing. The effect is that of slipping someone a shameful substance rather than an attractive product. The plain packaging intervention — which Australian officials say has been accompanied by a drop in smoking rate from 15.1% of people older than 14 in 2010 to 12.8% in 2013 — has been emulated by France, and other countries are likely to follow.

India, which is second only to China in terms of tobacco consumption, has had anti-tobacco legislation since 1975, but it was only in the 2003 ‘Cigarettes and Other Tobacco Products Act’ that a comprehensive plan was enacted, which stopped advertising, banned smoking from public places, and instituted warnings like “Smoking Kills” with images of skulls and, more bafflingly, scorpions. The more insidious danger in India, though, lies in smokeless tobacco, sold as sachets of inoffensive stimulant to women and even children. Losing the habit — projected to account for 13% of deaths here by 2020 — will take a range of counter-measures, and image-warfare is only one of them.

In 2014, India decided to enlarge pictorial and text warnings to 85% of the pack, up from the 40% set in 2008. The tobacco industry and its friends resisted the change, and a parliamentary panel chaired by BJP MP Dilipkumar Gandhi made the remarkable contention that there was no “Indian” evidence linking cancer and tobacco. But even as dispute and litigation grinds on, the pictorial warnings kicked in from April 1 this year.

Do scary pictures work?
Industry studies routinely question the effectiveness of these gruesome images, claim they reveal a paternalist approach, cramp the consumer’s right to choose, work against free speech, hurt livelihoods and so on. There is, though, a growing body of evidence that they do work, in tandem with prohibitive taxes. A nine-year study found that Canadian warning labels caused a 2.9-4.7% drop in smoking rates, when prices were rightly factored in, countering the US FDA’s contention that they caused only a 0.088% reduction. Another study by the Harvard School of Public Health and the public health foundation Legacy, published January 14, 2013 in the journal PLOS ONE, found that hard-hitting pictorial warnings are more effective than text-only versions, even with vulnerable groups. Pictures transcend language and literacy barriers, and prove especially useful in India.

Of course, this will have more of an impact on casual or undecided smokers, than on hardened addicts. Cigarettes are not merely about mental seduction; there is also the rote physical habit, what the poet Billy Collins calls “punctuations of flame and gesture”, and the craving for a fix of nicotine. But even if they can jangle the pleasure somewhat, and put off a fraction of potential buyers, the effort would be entirely worthwhile.

When it comes to warnings, Thailand’s No 1 and India 136

* Thailand has the world’s largest warnings covering 85% of the back and front of packs
* At a current 40% of the packet, India is now ranked 136 out of 198 countries, in terms of how prominent its pictorial health warnings are
* The US has dragged its feet for decades, and has graphic warnings but no pictures
* Australia was the first nation to require that cigarettes be sold in plain packaging, without brand colors and logos. France became the second last week