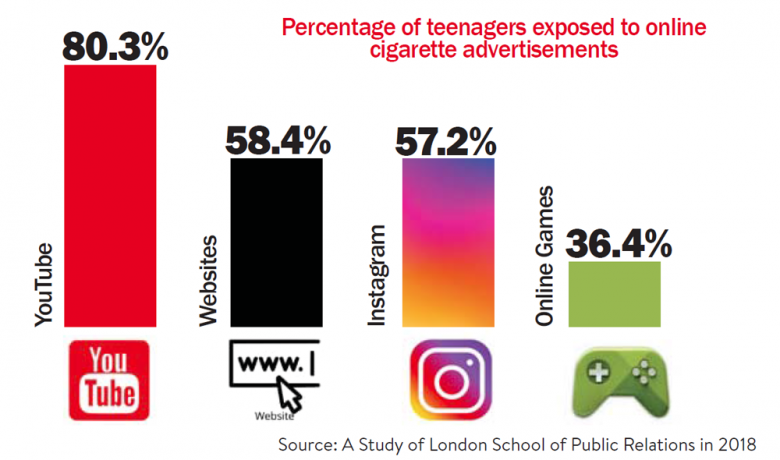 The internet is a free space no more for tobacco companies seeking to market their products after the Communications and Information Ministry accepted a Health Ministry request to block cigarette advertising on the web.

Communications and Information Minister Rudiantara had ordered his officials to search for websites containing cigarette advertisements, the ministry announced on Thursday.

It found that at least 141 platforms — including Facebook, YouTube and Google — had violated Article 46 of the 2009 Health Law, which bans images of cigarettes from tobacco ads, ministry spokesman Ferdinandus Setu said in a statement.

“Our team is currently taking down these accounts and content from the platforms.”

With over 171 million users across the archipelago, the internet serves as one of the most effective ways for cigarette companies to sell their products, particularly to the nation’s younger population, who now spend more time browsing the web than watching television.

Cigarette companies are believed to have shifted their focus to the internet as the government has imposed stricter rules for cigarette ads on television.

There is no data available on how much cigarette companies spend on online ads, but according to data analysis firm Nielsen Indonesia tobacco companies spent only Rp 1.6 trillion (US$111.9 million) on television ads between January and September last year. By comparison, they spent about Rp 5.4 trillion on TV ads in the previous year.

Citing the increasing prevalence of young smokers, Health Minister Nila Moeloek told Rudiantara that it was necessary to block all kinds of cigarette advertising on the internet.

“We hope by blocking cigarette advertisements on the internet we can reduce the smoking prevalence, especially among children,” she writes. “Three out of four teenagers know about cigarette advertising from online media. They encounter it on social media platforms.”

Tobacco control activists have applauded the government’s initiative as they believe it could put a halt to the increasing number of young smokers.

“We really appreciate the health minister making this step. If it is properly implemented then it will curb the growing [number] of young smokers,” National Commission on Tobacco Control (Komnas PT), chairman Prijo Sidipratomo said.

Nina Samidi, an activist with Komnas PT, said cigarette advertising was dangerous because it sold a cool persona of smokers to youth.

“In the advertising they are not selling cigarettes, they are selling an image and they keep developing this image to youngsters, and they are unconsciously attracted to it. And this is dangerous because it attracts them emotionally so the effect is stronger,” Nina said.

A study conducted by the London School of Public Relations in five cities on Java Island in 2018 showed that cigarette advertising on the internet had a strong influence on teenagers.

The study found that 10 percent of teenagers who did not smoke would have the tendency to smoke after seeing cigarette advertisements on the web.

About 17 percent of Indonesian internet users are between 13 and 18 years old, according to 2017 data from the Association of Indonesian Internet Providers.

“If we look at [the 2008 Electronic Information and Transactions Law] there is already a regulation in place about what cannot be shown on the internet, and cigarette advertising is not among these. Keep in mind that cigarettes are still legal products in Indonesia,” Henry said.

A National Development Planning Agency (Bappenas) study has shown that without tobacco control, the proportion of Indonesian smokers aged under 18 years old will grow to 10.7 percent by 2019, 15 percent by 2024 and 16 percent by 2030.