An Indonesian man smokes a cigarette during a protest near South Jakarta court in Jakarta, Indonesia, May 9, 2017. Picture taken May 9, 2017. REUTERS/Beawiharta 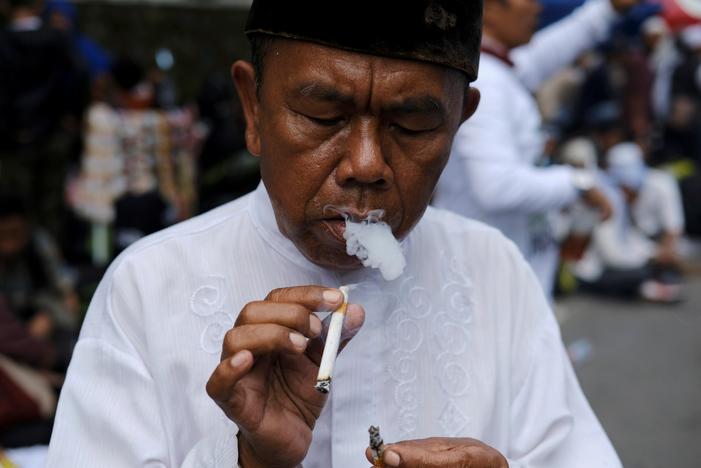 A proposed Indonesian tobacco law will roll back regulations to discourage smoking in a country that already has one of the highest smoking rates in the world and open the floodgates to advertising aimed at teenagers, a health ministry official said.

If the bill initiated by the parliament is passed, companies will no longer have to put grim pictures on cigarette packs of lung cancer or other diseases linked to smoking, said Mohammad Subuh, director-general of disease prevention and control at the health ministry.

Under existing regulations, 40 percent of the front and back of a cigarette pack must contain a “health warning” in the form of pictures and text.

Under the tobacco bill, reviewed by Reuters, cigarette packs would not be required to have a specific portion dedicated to health-related pictures. Cigarette businesses that put up advertisements, either in electronic, printed or outdoor media, do have to include a health warning that is “written with clear alphabets, easily read and proportionate.”

School and playground areas would be designated as “no- cigarette-smoke zones” instead of “no-cigarette zones”, which would allow cigarettes to be sold or displayed there, Subuh said.

“Indonesia is the most liberal country for the tobacco industry,” said Subuh, who oversees the health ministry’s tobacco control efforts.

“Let’s not open again the opportunities for the industry to lure teenagers to party with cigarettes. It’s like jumping from a helicopter without a parachute,” he said in an interview.

Last year, 54.8 percent of males between 15 and 19 years old were smokers in Indonesia, more than double the percentage of smokers in 2001, according to the health ministry. The price of a pack of cigarettes in Indonesia can be less than $2.

A shocking video of a toddler reportedly puffing up to 40 cigarettes a day on the island of Sumatra went viral around seven years ago, firing up anti-tobacco activists who said it underscored the problem of underage smoking in Indonesia.

“Indonesia is terrifying because it has among the most baby smokers in the world. From elementary school until high school, the smoking rate is also one of the highest,” the health ministry’s Subuh said.

Indonesia is the only country in the Asia-Pacific region that has yet to ratify or be a party to the World Health Organization’s Framework Convention on Tobacco Control (FCTC), which seeks to protect against the harmful consequences of smoking.

The tobacco bill mainly aims to sharply increase cigarette output in Indonesia, already the world’s fourth-biggest producer, at a time when other Asian countries are taking measures to curb smoking.

Proponents of the bill say it would safeguard a vital economic sector that employs millions of people and contributes nearly 10 percent of state revenues.

“We don’t mind some regulations, as long as they are not excessive,” said Abdus Setiawan, a board member at the Indonesia Tobacco Growers’ Association. Setiawan said he already considers emblazoning cigarette packs with the message that “smoking kills” to be “excessive.”

To become law in Indonesia, the tobacco bill has to be agreed between the government and the parliament. President Joko Widodo agreed in March to start discussions on the bill with the parliament, but it is unclear when the president will make a decision.

Indonesia, a country of 250 million and the biggest economy in Southeast Asia, is attractive for major cigarette companies at a time when growth is slowing in more developed markets.

Indonesia produced 269.2 billion cigarettes in 2015, while the total market was valued at 231.3 trillion rupiah ($17.3 billion), according to research firm Euromonitor International.

Regulations for the industry have been poorly enforced and some companies target young Indonesians with new products such as fruit-flavored cigarettes or clever advertising, activists say.

“A lot of advertisements here send the message that if you don’t smoke, you’re not macho, you’re not cool,” Muhammad Khanavi, a 14-year-old student, said on the sidelines of an anti-smoking event to mark World No Tobacco Day on Wednesday.