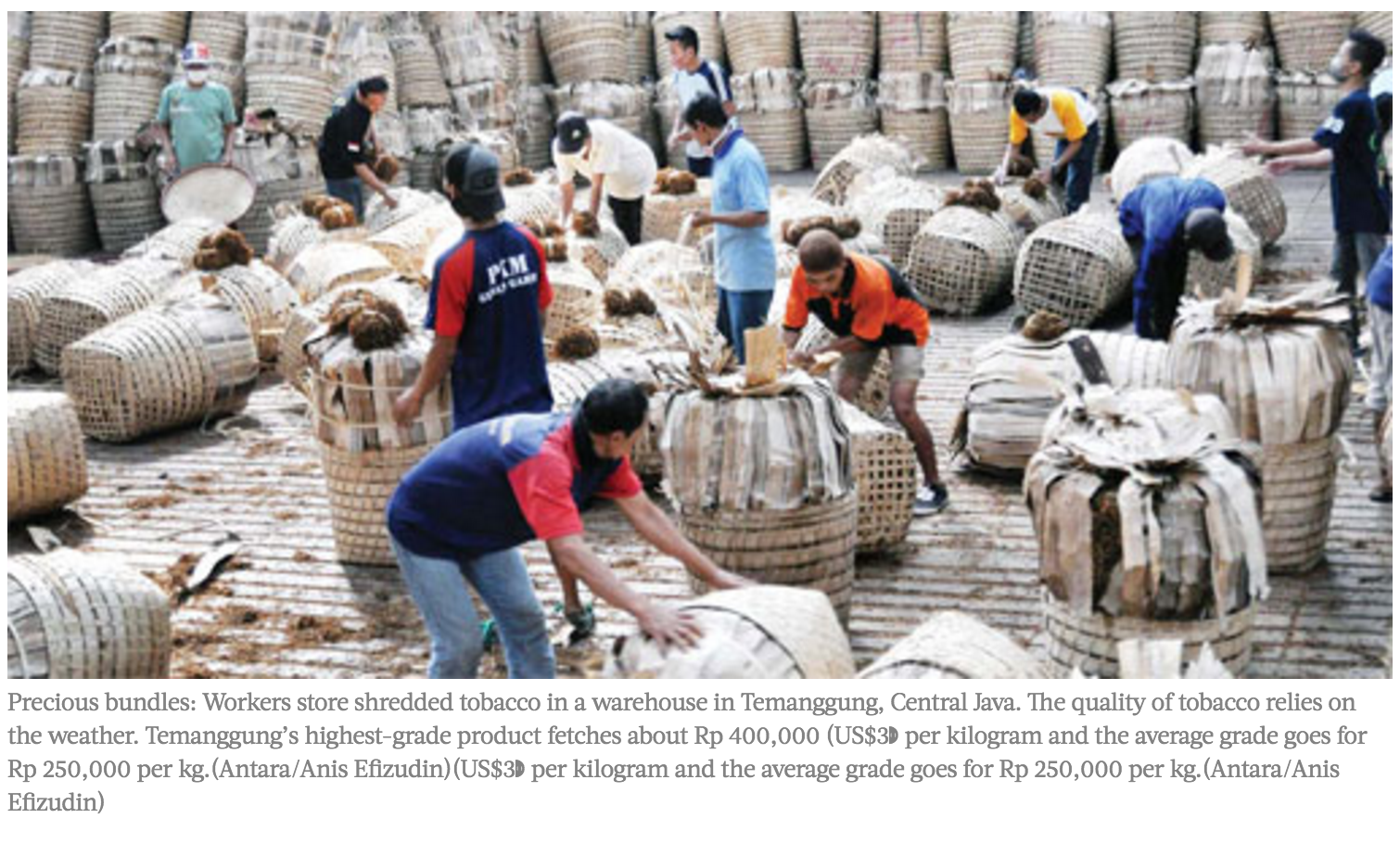 Precious bundles: Workers store shredded tobacco in a warehouse in Temanggung, Central Java. The quality of tobacco relies on the weather. Temanggung’s highest-grade product fetches about Rp 400,000 (US$30) per kilogram and the average grade goes for Rp 250,000 per kg.(Antara/Anis Efizudin)

Despite having a smoking prevalence already among the highest in the world, Indonesia has slackened its efforts to control the tobacco industry in the face of powerful lobbying by business players. While in Temanggung, Central Java, an area regarded as producing the finest tobacco in Indonesia, cartel-like practices are employed to control the trade, as The Jakarta Post’s Pandaya reports.

Smoke Free Agents, a non-profit antitobacco group, has become infuriated by the number of music concerts packed with young people in Greater Jakarta that are not smoke-free despite the legal ban on tobacco promotion at such events.

Between February and March, the watchdog counted eight concerts that were sponsored by the tobacco industry in which products were openly promoted to young audiences.

“After the government restricted cigarette ads, the industry started using music concerts to promote their products,” Smoke Free Agents coordinator Hasna Pradityas says. “They [the industry] name the events after their products and use music to lure young people to come in droves.”

The law that Hasna referred to is Government Regulation No. 109/2012 on the control of tobacco products as an addictive substance, which is a derivative of the 2009 Health Law. The regulation restricts cigarette advertising in certain places such as near schools and forbids advertisers from explicitly promoting cigarettes at events they sponsor.

But the regulation has had little effect. Cigarette producers, who contribute about Rp 145 trillion (US$10.8 billion) to the state coffers every year, spent Rp 4.5 trillion last year on advertisements, according to Nielsen Advertising Information Services.

The Achilles heel of tobacco restriction, weak regulation and poor law enforcement, has given rise to the migration of multinational cigarette companies to Indonesia as western countries have tightened their rules. In 2005, Philip Morris International Inc. spent $5.2 billion to take over PT Hanjaya Mandala Sampoerna, Indonesia’s third-largest tobacco company behind Gudang Garam and Djarum.

Then in 2009, British American Tobacco paid Rajawali Group and other shareholders $494 million for an 85 percent stake in the fourth-biggest cigarette maker PT Bentoel Internasional Investama.

Particularly worrying for anti-tobacco groups like Smoke Free Agents is the fact that cigarette producers are targeting the younger age bracket with “mild” products. The filtered, non-clove blended cigarettes contain less nicotine, which beginners find attractive. Their ubiquitous ads associate them with masculinity.

Love it or loath it, the tobacco industry not only keeps the state coffers well stocked, but it also keeps major sports and entertainment events alive and kicking. We have not heard of any gigs or badminton tournaments canceled because the advertising aspect of the sponsorship is just too obvious.

Even bigger promotions find their way into social media, where messages including those smacking of tobacco promotion, proliferate especially among youngsters.

What is bad for the general public but great for business is that Indonesia has no laws regulating cigarette advertising on social media, a large loophole the industry is cleverly making the most of.

The high rate of tobacco addiction among youngsters causes major concern at a time when Indonesia is enjoying a demographic bonus — a period when the young and productive population is larger than at any time before.

Miscellaneous Facts on Tobacco and Related Issues released by the Health Ministry in 2014, reports that most smokers in Indonesia started the habit between the ages of 15 and 19 years. In that age bracket, boys were on top at 57 percent with girls at 29.2 percent. Smokers from the lower-income bracket are said to spend 11 percent of their disposable income on cigarettes at the cost of education, which gets only 3 percent.

The University of Indonesia’s Center for Health Economics and Policy Studies blames the unrelenting advertising for the rise in smoking prevalence among the younger generation. The proportion of the population aged 15 and older who smoke increased from 34 percent in 2007 to 36 percent in 2013. In 2013, 1.4 percent of children aged 10 to 14 were addicted to cigarettes, the center reports.
A recent World Bank report placed Indonesia on the top of smoking prevalence among adult males at 72 percent in 2015. In distant second place comes Kiribati at 67 percent.

Hasbullah Thabrani, a researcher with the center, reckons that smokers will burn through Rp 330 trillion this year. “That money would be enough to finance 800,000 students to pursue their doctoral degrees overseas, assuming that each of them spends Rp 500 million,” he says.

According to Tobacco Economics in Indonesia, a book co-authored by a team of local experts, tobacco consumption in Indonesia has been rising since 1970, spurred by low cigarette prices, population growth, rising household income and the mechanization of the kretek industry. Kretek is a blend of tobacco and clove consumed by an estimated 80 percent of Indonesian smokers.

Close to 80 percent of Indonesian smokers started before they turned 19 years. Eight out of 10 child smokers have tried to quit but failed because of the social acceptability of smoking, its cheapness and the ubiquitous advertising, Tobacco economics in Indonesia co-author Abdillah Ahsan says.

Aware of the health hazards, President Joko “Jokowi” Widodo’s government in its middle-term health development plan aims to reduce the smoking prevalence among people aged 18 and younger by 25 percent from 7.2 to 5.4 percent in 2019. The Culture and Education Ministry has declared schools smoke-free areas and has banned all forms of cigarette promotion in their vicinity.

This all sounds great. But because Jokowi’s Cabinet is legendary for its inconsistencies, his smoke-free vision has been badly blurred by his Trade Ministry’s cigarette industry “road map” which will increase production to 524 billion cigarettes in 2020 from 421 billion this year and 397 billion last year.

The roadmap appears to show the way for cigarette makers to double their production of machine-made mild cigarettes. This year’s mild production is forecast at 121 billion and will soar to 306 billion in 2020 thanks to the roadmap.

Economist Emil Salim observes that the roadmap’s philosophy bears a resemblance to that of the controversial tobacco bill that House of Representatives lawmakers are deliberating with the ministry.

“Both believe that kretek is part of Indonesia’s cultural heritage; they make no mention of cigarettes’ adverse effect on health; they treat tobacco that’s cultivated only in five provinces more important than fisheries, which are an industrial lifeline for two-thirds of the country and both defend the cigarette industry, which is 90 percent owned by foreign companies,” he says.

BPJS Kesehatan, the state-run health insurance scheme, has seen rising claims for medication for diseases associated with cigarette smoking. In 2014, the total claims amounted to Rp 1,841 billion and rose to a whopping Rp 2,287 billion last year. Its latest statistics show that the country spent an estimated Rp 39.5 trillion on medication for tobacco-related diseases in 2013.

Interestingly, unlike more established insurance companies, which take smoking risks seriously because of the greater possibility of critical illnesses and early deaths, the BPJS is yet to make smokers pay more than non-smokers do.

An effective way to reduce the number of smokers as the WHO and the National Commission on Tobacco Control have stated is to increase tobacco taxes. But, already, the government’s plan to raise tobacco excises piecemeal has met strong resistance from the industry,.

The Indonesian Cigarette Makers Association (Gappri) warns that the plan will kill small-scale producers and retailers.

Quoting an Ernst & Young survey, Gappri officials argue that the tax rate is already very high, accounting for 53.4 percent of the sale price, higher than those in Malaysia, 46 percent, China 44.4 percent and Vietnam 41.6 percent. In Asia, Thailand has the highest rate with 73.1 percent.

As smoking prevalence is rising and law enforcement weak, Indonesia dithers about whether to ratify the Framework Convention on Tobacco Control, for which anti-tobacco campaigners have pressed while the industry has been fiercely opposed.

On World No Tobacco Day on May 31, Gappri wrote President Jokowi an open letter, telling him not to cave in to “foreign regulations” that were aimed at destabilizing the Indonesian economy using anti-tobacco groups.

“In fact, the groups hired by foreign powers have long provoked state institutions, the executive and legislative alike, which has resulted in the issuance of irrational laws and ministerial regulations […] They mean to undermine the tobacco industry and endanger the Indonesian economy,” the letter says.

Gappri has been trying to convince everyone that ratifying the convention would mean the government losing control of the local tobacco industry, which employs some 6 million people, because Indonesia would have to comply with rules dictated by the WHO.

Given the industry’s powerful lobby and poor law enforcement combined with weak legislation, it seems the current tobacco impasse will continue for a long time yet.