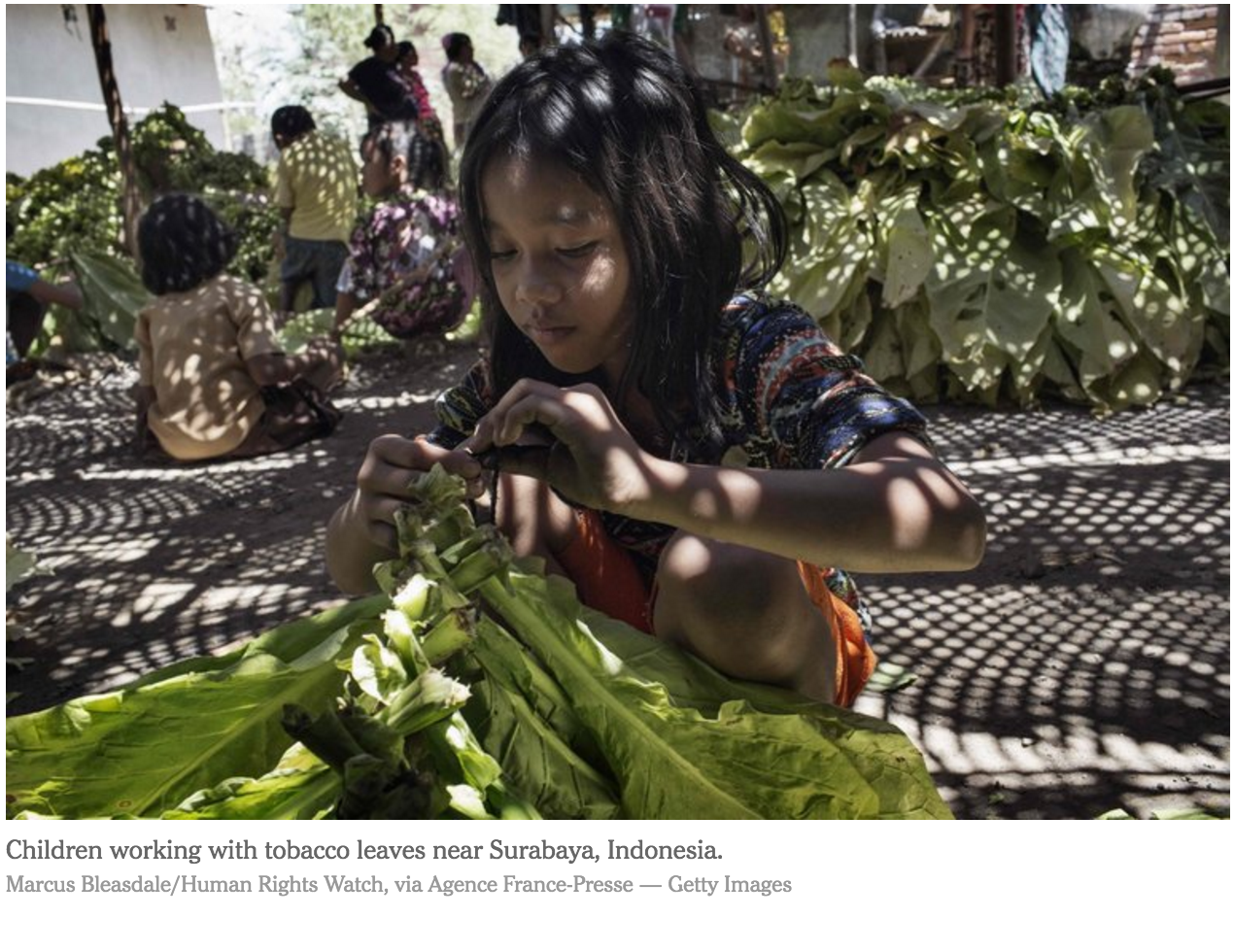 JAKARTA, Indonesia — Thousands of children working in Indonesia’s tobacco industry, one of the world’s largest, are being subjected tonicotine poisoning and exposed to pesticides, according to a report released Wednesday that called for establishing traceable supply chains to discourage the use of child labor.

The report, published by Human Rights Watch, based in New York, said that many Indonesian children working on tobacco farms, mostly on the country’s main island of Java, suffer from nausea, vomiting, headaches or dizziness, all of which can be signs that nicotine has seeped into the skin.

The children, who usually work without protective clothing, are also exposed to pesticides, and they face the additional hazards of doing heavy labor in extreme heat using sharp tools, the report from the rights group said.

“Kids are handling tobacco in their bare hands, and it can soak into the skin,” Margaret Wurth, a children’s rights researcher for Human Rights Watch and one of the report’s authors, said in an interview in Jakarta before its release.

The report, titled “The Harvest Is in My Blood,” calls on domestic and foreign tobacco companies that buy the crop to ban suppliers that employ underage children. Indonesia is trying to put its palm oil industry, the world’s largest, under similar scrutiny by ensuring that the oil is sold from sustainable sources that do not contribute to the destruction of rain forests. The government, major palm oil producers and industry associations have signed on to the effort, but it remains a work in progress.

Most Indonesian tobacco is sold on the open market, making it virtually impossible to determine where it was produced. Indonesia is the world’s fifth-largest tobacco producer.

Agriculture, including small-scale, family-run farms, is the country’s largest industry. The International Labor Organization has estimated that more than 1.5 million Indonesian children do agricultural work.

Children between the ages of 13 and 15 are legally allowed to do “light work” on tobacco plantations during hours when school is not in session. But Human Rights Watch’s investigation, which covered planting and harvesting seasons across Java and the island of Lombok in 2014 and 2015, found that children as young as 8 were doing heavy labor, Ms. Wurth said.

Virtually all of Indonesia’s more than 500,000 tobacco farms are family-run operations on 2.5 acres of land or less, according to the report, which said that adult workers as well as children were engaging in risky practices. “There’s no meaningful training or health education,” Ms. Wurth said.

She said that most Indonesian children working in tobacco fields do not go to local health clinics when they become ill, making it difficult to determine whether the number who get sick is in the thousands or the tens of thousands. “We also don’t know what the long-term health impacts might be,” she said.

Human Rights Watch said it had shared its findings with 13 Indonesian and multinational tobacco companies operating here and that 10 had replied. None of the Indonesian companies gave a detailed response, and two did not respond to repeated inquiries, according to the rights group.