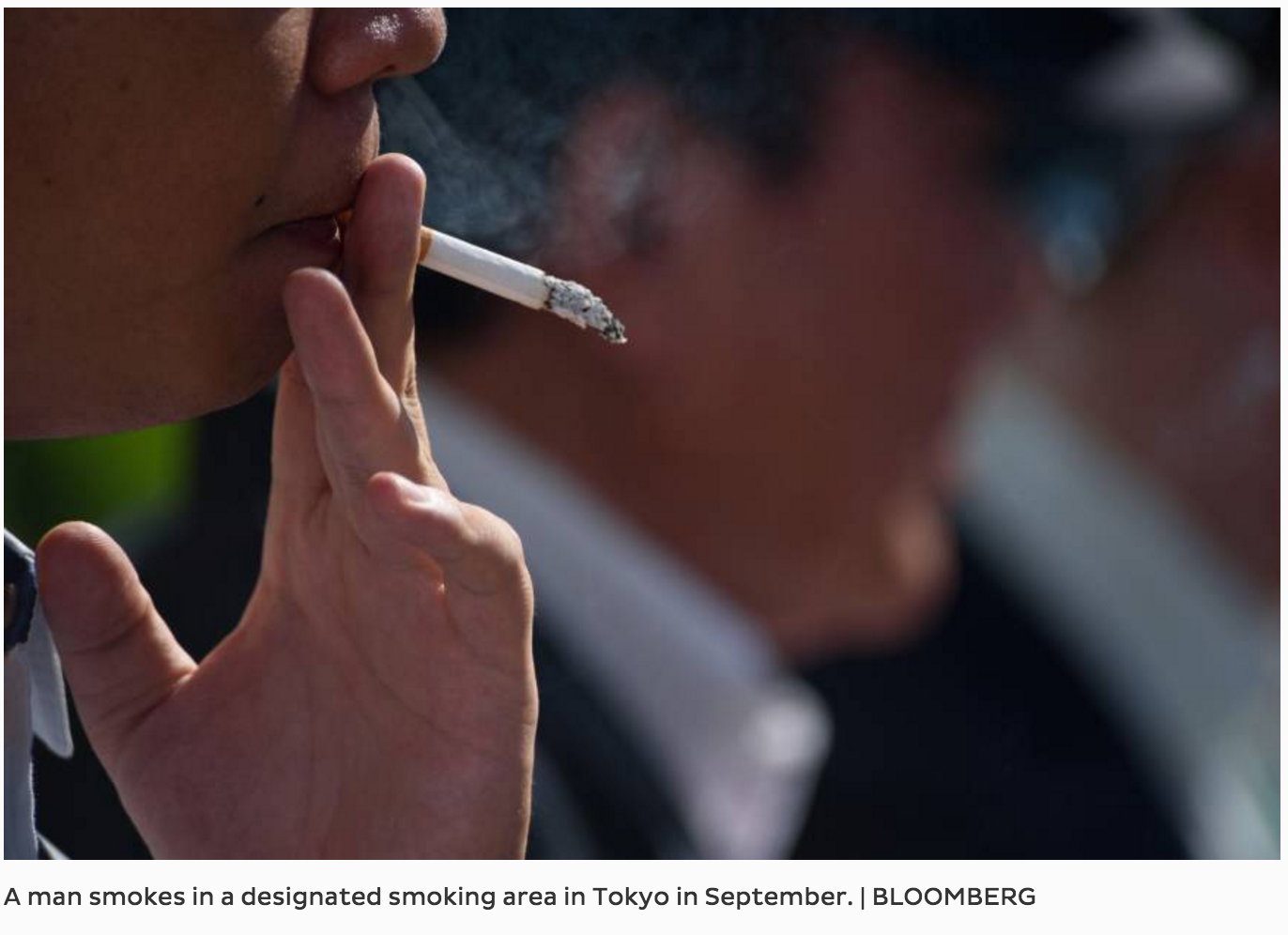 Smokers in Japan, who have long been welcome inside hotels, restaurants and other establishments, could soon find themselves out of favor with the general public and even with potential employers.

As the nation makes a push to clean up its act ahead of the 2020 Tokyo Olympics and Paralympics, social trends to strengthen policies against secondhand smoke are catching on, as an increasing number of people seem to prefer completely smoke-free environments rather than those that contain designated smoking sections.

In late November in Tokyo, about 70 participants in a meeting of students and lawmakers decided to propose the establishment of a punitive passive smoking prevention law to Health, Labor and Welfare Minister Yasuhisa Shiozaki for a “tobacco-free Olympics and Paralympics.”

In recent years moves have also been made to develop legislation in Olympic host cities, such as imposing fines on facilities that lack proper measures for handling secondhand smoke.

The Tokyo Metropolitan Government set up an advisory panel last year to consider a punitive ordinance but has postponed enacting legislation as the response has so far been lukewarm. There are concerns in the restaurant industry that businesses will suffer under uniform regulations.

A survey conducted by Pfizer Inc. in October, however, showed that 35.8 percent of about 6,200 respondents said they agree with the enactment of the ordinance, while 28.5 percent were against it.

The Japan Society for Tobacco Control, which has even expressed its disapproval with showing smoking scenes in animated movies in the past, is a staunch supporter of a smoking ban. “It is considered common sense around the world to have smoke-free environments,” said the society’s head, Manabu Sakuta.

Private companies, sensitive about the health of their employees, are also actively calling for smoke-free environments in the workplace, citing improvements in employee productivity, and in some cases are declining to hire smokers.

According to a health ministry survey conducted in 2013, 85.6 percent of businesses worked on creating provisions to limit smoking in the workplace, up 3.8 points from a 2012 survey. Also, 14.9 percent of respondents said they have implemented nonsmoking policies on the premises.

Hotel operator Hoshino Resorts based in Nagano Prefecture’s Karuizawa has gone to the extreme of not hiring smokers, arguing that smoking is directly linked to the competitiveness of companies.

The firm also says nonsmoking policies help workers to concentrate and eliminate the necessity for designated smoking areas, erasing the sense of privilege among some employees.

Nationwide restaurant operator Global Dining Inc. has also stopped hiring smokers and implemented its nonsmoking policy at all stores other than cigar bars, while the Ricoh Group imaging company has imposed a total ban on smoking during working hours at its domestic facilities since January.

The company also places bans on smoking when employees are outside on business, with the exception of break times.

In 2013, cosmetics maker Yanagiya Honten Co., which was established 400 years ago, achieved zero smoking among all its employees. It also provides health promotion bonuses between ¥100,000 and ¥150,000 to all employees each year on the condition that they continue to abstain from smoking.