The lawsuits accuse Juul of endangering students and forcing educators to divert time and money to fight an epidemic of nicotine addiction among teenagers.

With school districts across the United States scrambling to reverse the rise of vaping among teenagers, three of them on Monday filed suit against Juul, the e-cigarette manufacturer, accusing it of endangering students and forcing educators to divert time and money to fight an epidemic of nicotine addiction.

The school systems in St. Charles, Mo., Olathe, Kan., and on Long Island were believed to be the first in the United States to sue Juul, which dominates the e-cigarette market with devices that look like thumb drives and that have become wildly popular with American teenagers.

The districts say Juul explicitly marketed its products to youths, leaving schools to shoulder the costs of stopping students from vaping, disciplining them when they break school rules and providing support services when they become addicted.

“As smart as our students are, they don’t understand the long-term ramifications of vaping and the amount of addictive chemicals they are dealing with,” said John Allison, the superintendent of Olathe Public Schools, which serves 30,000 students in a suburb of Kansas City. “It’s our role to protect our students today and in the future.”

Juul, which has denied steering its products toward teenagers, did not immediately comment on the lawsuits. 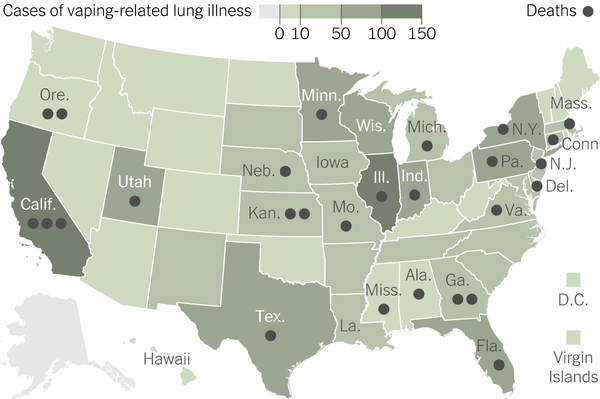 Hundreds of people have been sickened by lung illnesses linked to vaping, most by using THC products.

Public officials have taken a stronger stance against e-cigarettes in recent weeks after health experts identified a link between vaping and lung problems in August. The number of people with lung illnesses associated with vaping has risen to 1,080, the Centers for Disease Control and Prevention reported last week. Twenty-two deaths have been confirmed in 19 states, according to the C.D.C. and state agencies.

Rhode Island, Michigan and New York have banned most flavored vapes while the Massachusetts governor has issued a four-month ban on the sale of all vaping products. In the private sector, Kroger and Walmart have said they would stop selling e-cigarettes, and some television networks have stopped broadcasting ads for Juul.

Given the unanswered questions about the exact cause of the illnesses, many health experts have said that people should not vape. According to the C.D.C., young people and pregnant women should never use e-cigarettes, and adults who do not smoke should not start using them.

Still, a recent survey of thousands of students found that about one in four high school seniors had vaped during the previous 30 days; in 2017, one in nine seniors said they had done so. The researchers who conducted the survey concluded that new safeguards were needed to protect teenagers, as “the developing brain is particularly susceptible to permanent changes from nicotine use and when almost all nicotine addiction is established.”

In one of the suits filed on Monday, the Francis Howell School District in St. Charles, which has about 18,000 students, accused Juul of “taking a page from big tobacco’s playbook” to develop “a product and marketing strategy that sought to portray its e-cigarette products as trendsetting, stylish and used by the type of people teenagers look up to.”

Among the steps that schools have had to take against vaping, Mr. Kieffer said, were installing sensors in bathrooms, removing bathroom doors, banning flash drives, hiring more staff and paying for programs that help students deal with nicotine addiction. The suits did not specify the amount of damages the districts were seeking.

“In numerous meetings that we have had with educators, administrators and board members across the country,” he said, “the consistent theme that we have heard is that districts do not intend to stand by and allow this crisis to escalate but instead are taking a stand to protect their kids.”

Legal experts said that though the suits were reminiscent of litigation against makers of guns, opioids and tobacco, the districts could face a stiff challenge in establishing their case.

“It has nothing to do with the school themselves,” said Kathleen Hoke, a law professor at the University of Maryland who studies tobacco regulation. “The connection is to the students who have been marketed into addiction. I do think it’s very unique.”

Heidi Li Feldman, a torts and product liability professor at Georgetown University Law Center, said the suits reminded her of school districts in the Houston area suing former lead-paint manufacturers to recoup the costs of lead-paint removal in their buildings.

She said that school boards could learn from cities that have filed litigation against manufacturers of guns, opioids and tobacco, adding that schools can be held liable for not protecting their students or failing to protect the children.

“Will they be dismissed or allowed to head to trial? It’s a live question,” she said.