A whopping two million Cambodians are regularly lighting up, catalysing the already-weighty health burden plaguing the Kingdom, according to the authors of a comprehensive study on smoking published today. 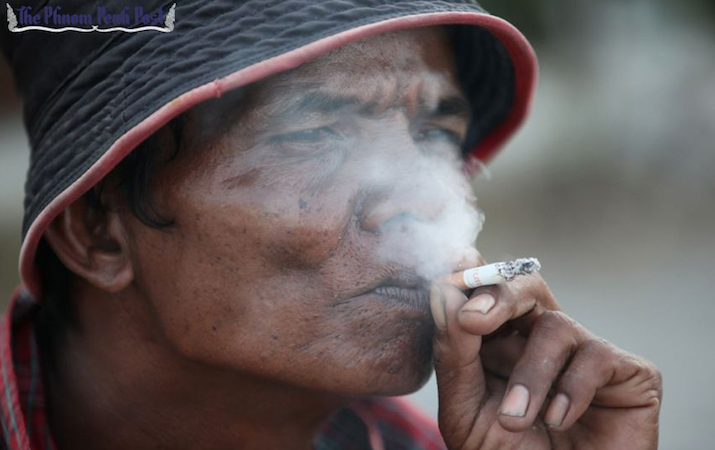 Smoking is the nation’s third-highest risk factor leading to shortened life expectancy and disability and responsible for contributing to the death of thousands every year, according to the study.

Published in the Journal of the American Medical Association, the report looks at smoking habits in 187 countries over the past 32 years.

The study found that 42.1 per cent of men in Cambodia were daily smokers in 2012, earning the Kingdom the fifth-highest ranking in Asia beneath Indonesia at 57 per cent, Laos at 51.3 per cent and China at 45.1 per cent.

However, the tobacco habit isn’t plaguing everyone.

“Smoking prevalence – the portion of the population that smokes – varies greatly between Cambodian men and women, a common trend in many East and Southeast Asian countries,” the study notes.

Among Cambodian women, only 4 per cent were found to smoke daily, less than half those in Laos, at 11.4 per cent .

But for men, living in a country where cigarettes are cheap and smoking in public places – indoors or out – is rarely discouraged, change is needed according to report author Dr Alan Lopez, laureate professor at the University of Melbourne.

“The takeaway for the Cambodian government is to view this country’s tobacco addiction seriously. It’s a major hazard that is not coming to Cambodia, but is already here and killing more than 9,000 Cambodians every year,” Lopez said in an interview on Monday.

“The takeaway for the Cambodian public is very simple: Smoking shortens your life expectancy by up to 10-15 years on average,” Lopez said, and if the average person picks up a cigarette between the peak age range of 15-20, they will have a one in two chance of being killed by tobacco, Lopez warned.

Changes to the nation’s smoking prevalence, the portion of the population that smokes, has actually decreased by an annual rate of 0.5 per cent between 1980 and 2012, Daravuth said.

Dr Sok Touch, director of the Ministry of Health’s communicable disease control department, could not be reached for comment. While the government has passed several initiatives such as a 2011 sub-decree banning tobacco companies from promoting their brands in the city via advertising, and a 2009 sub-decree requiring warnings on cigarette packets, enforcement has been spotty.

And for most smokers, the effect has been negligible.

Chanty, a 19-year-old construction worker in Phnom Penh who declined to give his surname, has been smoking since he was 15 and often whips through a pack a day.

“My friends taught me how to smoke. Now I can’t stop.”